How Gujarat's Christians are rallying for peace and the Pulwama martyrs

Christians pray for the nation and its leaders during regular church services and Sunday masses. But this time, the low-profile community felt the need to display their solidarity.

Over February 17-18, thousands of Christians participated in peace rallies in Ahmedabad, organised by various churches in support of the martyrs of the Pulwama terror attack.

This is probably the first time that the Christian community in Gujarat, which usually keeps a low profile and stays away from political matters, organised a rally on an issue not related as such purely to their own community.

Different Christian denominations came together for a peace rally in Maninagar in East Ahmedabad on February 17, where members of the Roman Catholic Church, the Church of North India (CNI), the Methodist Church, Salvation Army and Alliance Church gathered in the thousands for a silent candle march. The march began from the CNI Church and ended at the Methodist Church. People walked in an orderly manner, without any sloganeering or shouting. The rallies, quiet, grave and dignified, were held in many parts of the state. (Photo: Author)

Bishop Silvans Christian of CNI, Ahmedabad, said, “We, the Christian community, want to show our support to the nation during this time of grief. We have been praying in our churches every Sunday for India, but this Sunday, we organised a special rally to pray for the families of the martyred CRPF jawans — that God gives them solace and courage during this tragic time.”

Bishop Christian added: “The leaders of India will be making crucial decisions on how to tackle this kind of terrorism in the country. So, we pray God will give those in authority the wisdom to make the right decisions.”

Another peace rally was held on Monday evening at Sardar Patel Baug near Lal Darwaja by the Methodist Churches of Ahmedabad West, supported by the Grace Fellowship AG Church. Here too, priests and church members, dressed predominantly in white, prayed for the bereaved families and for peace in the nation.

District Superintendent Reverend Vijay Macwan said, “We share the sorrow with our nation during this tragic time. We are here in solidarity with the bereaved families. As Christians, we pray for our great nation.”

Unlike in other rallies, no slogans were shouted. Women and children also participated in large numbers. Several other rallies were also held in Christian societies like the Lalbhai Centre in Maninagar East. In Vadodara too, the Christian community held a silent march on February 19.

In Gujarat, Christians are just 0.5% of the total population — fewer than Sikhs, who are 1% of the population. 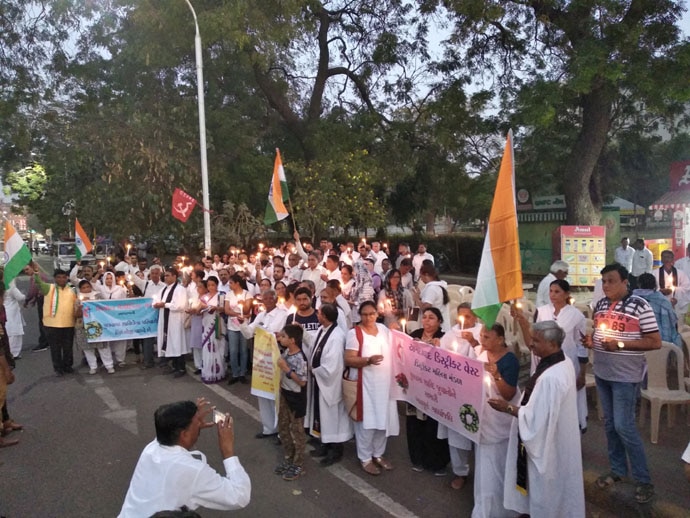 No rally has been held by the Christian community in the state for a long time. The only time public rallies have been held is to protest attacks on the Christian community. The last time, for instance, was in March 2015 after a 71-year-old nun was raped in West Bengal. Rallies were also held when the government proposed to remove Good Friday as a holiday in Gujarat, and when churches were attacked in Dangs in 1998.

As recently as November 2018, right wing outfits threatened to cancel an event organised by the Jesus Mission Church, for which they had hired a hall in Ahmedabad. The Church had invited a pastor from Chennai to speak on the theme ‘Barso: An encounter with the Holy Spirit’. Eventually, the event was held after the Church assured the groups no conversion activities would be conducted there.

Signfiicantly, Christians offer prayers for the nation and its leaders even during regular church services and masses every Sunday.

But these recent peace rallies mark a new trend, where the Christian community has perhaps felt the need to show its patriotism publicly.

Concerned about the toxic situation in the country, Grace Fellowship AG Church pastor Geo Varghese said, “Hatred showed its ugliness in the attack at Pulwama. We pray that hatred doesn’t continue to influence and steer the responses to it. The end result will only be ugly. We, the Church, pray for well-directed and weighted responses from India, instead of knee-jerk reactions. May God guide our leaders. We sincerely pray for them, just as the Bible commands us to.” 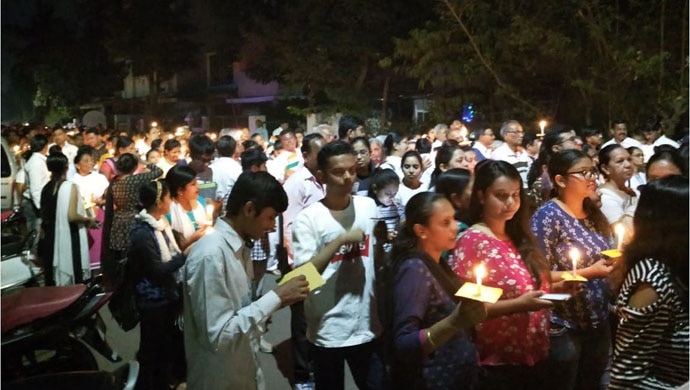 Participants at Church rallies said they were happy showing their love for the nation and their solidarity with the martyrs' families. (Photo: Author)

Earlier, several Muslim organisations and religious bodies too had held similar peace rallies in the city.

Due to the vitiated climate of the nation, where several political leaders, former generals and even media anchors are hate-mongering, minority communities seem to feel the need to express their love for the nation in a more overt and visible manner.

Normally, the Christian community keeps a low profile in Gujarat and Christian priests and leaders don’t make political or social statements. But this time, the need to show that they stand with the nation has resulted in several public rallies.

Certainly, Christians who attended the rallies were happy showing their love for the nation. As Triza Jimmy Christie of the Methodist Church said, “We are with the families of the martyred jawans — and we pray that God gives them solace.”