I don't exist if I am not Assamese

We can't be Hindus or Muslims, if we can't remain Assamese.

Feeling betrayed has been an integral part of my existence as an Assamese in India. The passage of Citizenship Amendment Bill, 2019, in Parliament was one such occasion.

I'm an Indian who was born Assamese. I'm a little more Indian than many others because I was born in Assam. Had the people of Assam, led by our first chief minister Gopinath Bordoloi, not fought for the state's inclusion in India, Assam today would have been part of Bangladesh.

We fought for our existence in India, which came naturally to many of you. Certainly, Assam remains grateful to two sons of Gujarat — Mahatma Gandhi and Vallabhbhai Patel — who sided with the people of Assam and saved us from becoming a minority group — speaking Assamese — in a Bangla-speaking country.

Seven decades later, two other Gujarati gentlemen — Prime Minister Narendra Modi and Union Home Minister Amit Shah — have pushed us back to the same existential crisis. They will ensure that we lose our language, land and legacy in the same India we so desperately wanted to be with.

Can I remain Indian without being Assamese? Can I survive my nationality if I lose the language my mother spoke in the same land I was born in? Have you all non-Assamese Indians ever tried to understand why Hima Das, after winning a gold medal in a global event, draped herself in a gamocha, along with the Tricolour? Have you ever tried to understand the constant fear we have about losing our identity in our own land? There is a reason why Hima Das draped herself in a gamocha, along with the Tricolour, after winning gold in a global sports event. (Photo: Twitter/@MinistryWCD)

It's not xenophobia, as many of you, especially the liberal brigade, would like to believe in. We don't hate Muslims — we did not want National Register of Citizens (NRC) to throw them out. In our schools, we recite Borgeet, Vaishnavite prayers, and Jikir, Sufi prayers with the same devotion. For us, Poa Mecca is as holy as Bordowa. For us Adil Hussain is an Assamese first. All other identities don't matter. We would not want an NRC which will not have his name. We would not want an Assam which excludes even one Assamese — irrespective of where he or she goes to pray.

We are not Hindus the way most of you understand Hinduism. We don't worship the cow — for us goru — as a mother. Goru is our friend, a family member. We scream at it and we show love like we do to our siblings. We have one day of Bihu, our prime festival, dedicated to goru. We don't worship the river, either. Yet, the Brahmaputra is our life. Every year, it sweeps away hundreds of us, yet we can't imagine life without the seasonally angry river. He is family to each of us, we live for him and we can die for him.

And we can die for our identity, the Assamese identity. This identity has no religion — I can pray to Bhagawan, I can pan pray to Allah — but being Assamese is the strongest assertion of my existence. It's that bond which overrides every other bond I may have, based on my religious or geographical origin. The only other identity I understand is being Indian.

And I'm a little more Indian because I have struggled to remain Indian; more than many of you. 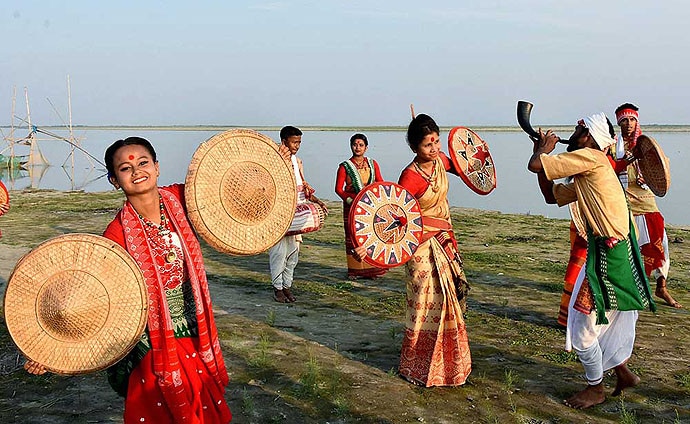 Being Assamese is the strongest assertion of my existence. (Photo: Reuters)

But what's the reward we have got in return?

We are forced share my Assam with more and more Bangla-speaking people from the same Bangladesh we wanted to run away from. Our generosity was taken for granted and the land and resources for us kept shrinking. Our language, culture and political destiny have been challenged. And yet, we are expected to continue this legacy of accommodating more 'guests', even if that means losing your own space.

We have agreed to let illegal immigrants from Bangladesh legally stay in Assam, if they entered the state before 1971. In the rest of the country the cutoff date is 1948. We have accepted this extra load of population — both Hindus and Muslims — yet we are called intolerant to these infiltrators who have come purely for economic reasons.

The Congress wanted to legalise the Muslim immigrants, because they wanted their votes.

The BJP wants to settle the Hindu immigrants because the saffron party wants their votes.

But should those votes come at the cost of my identity? Am I delusional in my fear of losing my language and culture to Bangla speakers?

Can I forget that Bangla was imposed as Assam's state language between 1836 and 1872? Can I forget young Assamese students had to give their lives in the 1960s to protect the language? Can I forget the Bangla-speaking people of Barak valley don't accept Assamese as an official language, even though it's inside the geography of Assam? Can I ignore the fact that Bangla speakers in Assam are increasing while Assamese speakers are declining?

The fear rises every day because, unlike the rest of you, we the people of Assam, have already hosted millions of Bangla speakers we did not want to live with. Today, Narendra Modi and Amit Shah want to legalise a large number of them, because for them they are Hindus — and that's the only identity BJP and RSS understand.

Modi and Shah want us to be 'good Hindus', embrace Hindus from a different country, even if they speak Bangla. Even if we have a history of conflict over language. What they fail to understand is that, for me, and for every Assamese, being Assamese in Assam is above everything else. We can't be Hindus or Muslims, if we can't remain Assamese.

Yet, I'm not angry with Modi and Shah, and I forgive them. They did not cheat us, they always told us they wanted to do. It was not a hidden plan.

But I cannot forgive Sarbananda Sonowal. I cannot forgive Himanta Biswa Sarma. They promised me in the summer of 2016 that they would protect my maati (land), bheti (home) and jaati (my Assamese existence).

Today, they betrayed me.

We have been betrayed many times earlier. Yet, we have not lost hope. And that's the reason Hima draped the gamocha. Like every Assamese, she knows, any day could be the day of our Last Lesson.

We must not miss any opportunity to celebrate our identity and existence.