During a recent trip to the Rann of Kutch, I happened to visit Sardar Post, which is bang on the India-Pakistan international border. Close to the post is a Central Reserve Police Force (CRPF) memorial. Why this monument stood there was the obvious question. Here is what I found. In April 1965, the Pakistan Army launched "Operation Desert Hawk 1" against Indian border posts to establish claim over the Indian territory bordering Pakistan.

On April 9, 1965, at 3am, Pakistan's 51 Brigade Group — consisting of 3,500 men — launched a full-scale attack on Sardar and Tak posts in Rann of Kutch. At the time, the border was guarded by the CRPF and Gujarat State Police Force.

That morning, 04 Coys of 02nd Bn CRPF were on duty. The jawans fought valiantly and repulsed the attack during a battle that lasted 15 hours. During this time, Pakistan lost 34 soldiers while four others were taken as prisoners. On the Indian side, our CRPF men made the supreme sacrifice and 19 others were jailed.

The determination and valour of 02nd Bn CRPF jawans kept the Pakistan Army Brigade at bay for more than twelve hours.

Col Keshav S Puntembaker, who surveyed the battle spot from an aircraft the morning after the battle, wrote: "Enemy losses, as seen from the air were much higher which perhaps broke their spirit to hold on to the area. Reflecting over the issue, it seems amazing that an attack launched by a regular infantry brigade of the Pakistan army with full artillery support could not overcome a company position held by the Indian armed police. It appears that the medium machine gunners of the CRPF put up a spirited resistance and extracted a very heavy toll on the Pakistani brigade, which sapped their will to continue with the operations."

Today, the border is easily accessible, fenced and flood-lit. Imagine the condition 53 years ago when the area could only be reached by riding on camels. Then, as now, the whole area had little in the form of habitation - it is an endless sea of sand and then some.

It is in the memory of those brave jawans that the CRPF memorial stands.

The April 9 battle is important for two reasons. One for the valour displayed by a small contingent of CRPF/SRP in repulsing a Pakistani brigade.

Two, it is because of this incursion that the government decided to set up a dedicated force to man the border with Pakistan — that is the Border Security Force (BSF). Till 1965, India’s borders with Pakistan were guarded by the State Armed Police Battalion.

"The above mentioned attacks on Sardar Post, Chhar Bet and Beria Bet on 9 April, 1965 in Kutch exposed the inadequacy of the State Armed Police to cope with armed aggression. At that point the Government of India felt the need for a specialised centrally controlled Border Security Force, which would be armed and trained to man the International Border with Pakistan."

This way, the BSF came into being on December 1, 1965. Today, the force guards the international border with Pakistan in the states of Gujarat, Rajasthan, Punjab and parts of Jammu and Kashmir, including where it watches over the Line of Control along with the Indian Army.

On the eastern side, it guards our border with Bangladesh.

The Kutch memorial is built on the very spot where the battle took place. It consists of a marble plaque built on a raised platform, all enclosed by barbed wire. Since access to the area is restricted, another memorial was built by the Gujarat government in 2013 at the border outpost of Dharamshala. Both the memorials could be far better built. 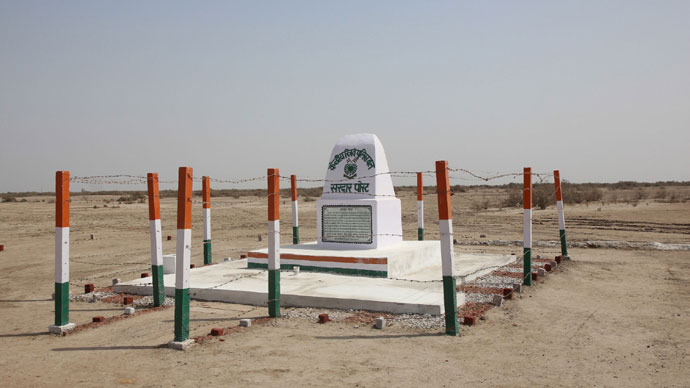 This author has seen the Rezang-la War Memorial in Ladakh (about five hours drive from Pangong Lake), built in equally inhospitable terrain in the memory of 114 men of the 13 Kumaon Regiment, and wishes the ministry of home affairs would build an appropriate memorial at Sardar Post in the honour of the CRPF martyrs.

The average Indian would then come to know of their valour as well as the story of BSF's beginnings.

When a civilian visits the memorial, she will better appreciate the role played by BSF and the unique challenges faced by its jawans. During summers, temperatures in the region cross 45 degrees. A BSF officer joked that the jawans are in a state of permanent meditation because there is solitude and no mobile communication at their posts.

Notwithstanding the harsh mercury, I found the BSF team to be cheerful; the jawans share a great bonding among themselves. They are warm, helpful, go about their job sincerely and are firm when it comes to checking permissions at border posts.

Visitors will see a well-fenced border, flood lights with power supplied by the state electricity board (not polluting diesel like I saw at Jaisalmer border in 2013), a road running parallel to it and know how the state government has helped meet the water needs of jawans. Another very interesting story is that of the temple of Hanumanji, which was relocated to India at Bediya Bet, close to the border outpost of Dharamshala (in Kutch raised part of land is called Bet).

The area in Pakistan — opposite to where the temple exists today — is called Jat Talai, and was part of India before the 1965 war. After the battle, India agreed to vacate Jat Talai. According to local folklore, when the Indian troops started moving away, they got a message from Hanumanji, who asked them, "Why are you leaving me behind? Take me with you."

And so, the jawans carried the idol and walked for about 27km till they reached Bediya Bet. They spent the night there and the next morning, the idol stuck itself firmly to the ground. It could not be budged. Thus, a small temple was built at the site. Today, it attracts a large number of devotees who hang bells within its edifice so their wishes are fulfilled.

I found bells of every conceivable shape and size.

India is full of stories of valour and faith. These two symbolise that truth.