The Debutante's Ball: A modern spin on a medieval, and aristocratic ritual

Why do I find this whole 'debutante ball' thing so unfathomable?

Is it because it is spelt in French? 'Le Bal des Débutantes' with an accent on an ‘e’ to stand out from the common version? 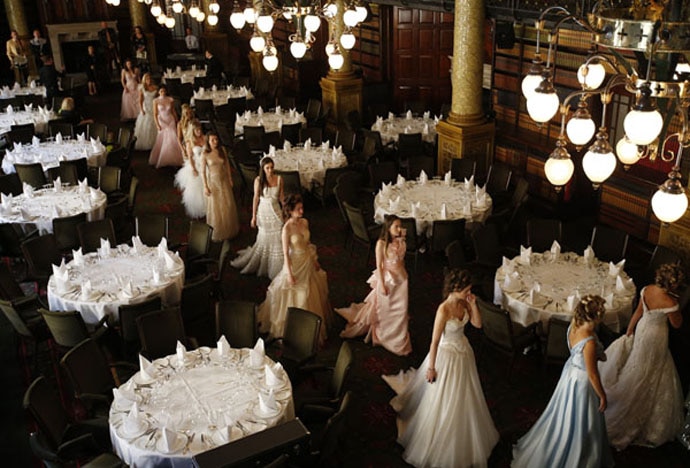 Of course, detractors would say that since my own offspring has no chance of getting invited, I can only be a bitter, vitriolic, middle-class nobody, struck by schadenfreude.

In their view, I'd be common and pedigree-less. I can only therefore rave and rant about the ways of the rich and the famous. However, they seem to have got one thing totally wrong — the world of debutantes was never based on money!

Let us hark back to those regressive days when class really set people apart. There was no way a trader’s daughter could marry a Duke, except in Barbara Cartland’s novels. Aristocracy ruled the lands and the realm with total entitlement. Women were presented to society as possible brides for clueless men of equal standing — whose only ability was riding horses and tying their cravats perfectly.

Then, they were presented to the monarch and had to be engaged by the end of the season or they were, well, pretty women resting on the shelves! Destined to be a maid forever.

No aristocratic mother could be more horrified if her belle was not betrothed by the end of the fall, especially if she had another, younger sister waiting to come out the following season. These days, 'coming out' has a completely different meaning, of course. But imagine then, two daughters twirling around the ballroom, one pale with the patina of the last season and the perverse society matrons snickering away. Bring the smelling salts please!

It was rich Americans who pulled at the tight seams of this monolithic society. They couldn’t be presented to the monarch — but they could really pay for those parties at the Savoy, the caviar and champagne! A bevy of transatlantic beauties were thrown into the mix outside the Palace.

Wallis Simpson was no belle — but she did snare the man who was at the top of the heap, didn’t she? Royal memories still go a bit green at all that jazz, almost 90 years later.

So let’s get back to the new, new debutante ball.

Since they couldn’t wangle a real ball, some smart little lady — or man — in an events company came up with the design/'luxury' idea of the century.

If you can’t get to the real palace, create one of your own!

It is called 'a couture event' — and obviously, held in Paris. It is held at a hotel. It is only by invitation and there lies the barred-door clause, essential to make it appear exclusive.

You cannot barge in with your Swiss and Cayman Island Daddy bank accounts. You need to be made to feel giddy with relief that you have made the cut. It seems easier to get into Hogwarts than the ball. However, going back to the class-and-crass argument, it is all about the money you see.

I spent a very fun evening at Le Bal des débutantes in Paris on Saturday. What does "being presented to society" mean to millenials ? Read all about it on @wwd https://t.co/BQjrEgiRKO photos by Franck Mura pic.twitter.com/KOmTiOzLEk

Most of it has been acquired over the last 30 years or so and some of it a bit older, but still the trader kind. They do rope in a few minor European royals to lend it that whiff of authenticity. We are a Republic in India and no one noticed European tabloids reporting our little royal-no-longer entrant being addressed as HH Princess so and so, or Her Highness (the loss of which had caused the pretty Di of Wales copious tears).

Then, there is the paraphernalia. Service providers (what else would you call them?) probably rush to get the supplier contract. In olden days, they would have got a royal charter. The gowns are custom-designed from Dior to Versace, the crystal is real, the wine is vintage and the jewels, top-of-the-line. Isn’t it just a high-level prom do then? Just that these kids own their limos and their gowns, not needing to rent them.

These people are getting their kicks at what? Chez Quelle? Being rich? Is that all?

The list of these under-20-year-old girls seems to be of media, Hollywood, Bollywood, China-Korea-new money extraction. They don't even seem as cool as the jetset of the 70s – rock royalty to Latin American lovers. These millennial kids are interchangeable, fresh off a template – perfect hair, nails and heels, nipped-in waists, glittering diamonds — and when the ‘official jeweller’ gets her daughter a shoo-in, you really understand that it takes only the right kind of chequebook flash to get in.

Remember, at the real thing 50 years ago, the la-di-da owned their tiaras for centuries. It's likely they didn’t endorse some sales brand. But as another people watcher said watching closely — India has pots of money, and with China on a downturn, expect more mothers to jostle to get their damsels a ticket to the ball.

Here I was hoping our girls could get more Olympic gold medals some day!

Still, zipping up a long, lace dress does require a certain skill set.