The issues raised by the controversy about the propriety of a pastoral letter like what the Archbishop of Delhi has sent to various congregations under his stewardship, with my responses to each, are as follows:

Is the Archbishop’s worry about the peril to secularism well-founded?

In theory, secularism, especially of the Western genre, stands on the church-state separation. This entails consigning religion to the private life of citizens. But this is not the model, unfortunately, we have embraced. Our edition of secularism professes to be equidistant from religions; which is impractical even in the most idealistic of democracies, given that democracy is a game numbers. The state, wielded by the brute majority, has to be a saint to be thus clinically impartial.

Moreover, the separation between religion and politics in India stands altogether breached for all practical purposes. 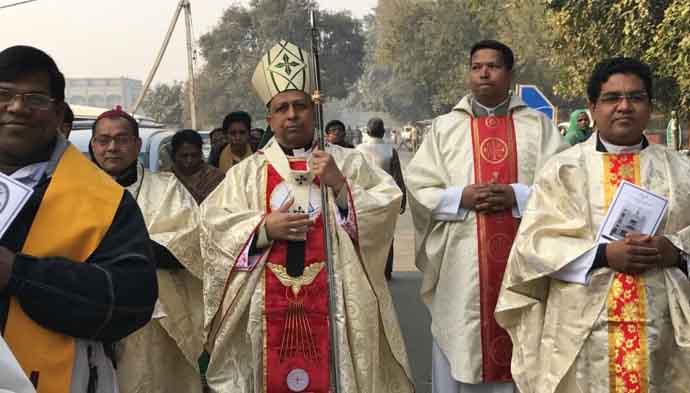 The mandir issue was a public enactment of this rupture. With Yogi Adityanath heading the most populous and politically crucial state of India, erecting his appeal on his status as a mahant, political authority and religious authority became one. It is being further consolidated by elevating Yogi to the state of a national icon — a role for which he is woefully inadequate.

So, the concern about the health of Indian democracy, based on secularism, is real and widespread; nor is it confined to the Archbishop. From senior judges in the Supreme Court, to the man in the street, the worry is growing. The Karnataka elections has aggravated it further.

Is it improper for a religious authority, within a secular polity, to share his concerns with his flock and exhort them to pray and to purify themselves, which seems to the ostensible purport of the letter?

This question cannot be addressed without invoking the distinction between religion and spirituality. Religion can be escapist; not spirituality, which is a transforming engagement, based on universal values, with realities. It is from a religious point of view that a Bishop or Archbishop is required to stay confined to the church compound. Plato, in The Republic, especially through the greatest of all similes in political philosophy, the Simile of the Cave, insists that those who are enlightened have a duty to share the light with those who languish in the darkness of understanding.

So, what is it that Archbishop Cuto has urged his people to do?

I quote below the relevant segments in the interest of specificity.

“We are witnessing a turbulent political atmosphere which poses a threat to the democratic principles enshrined in our Constitution and the secular fabric of our nation,” while urging the Christians to pray for the political leaders of the country as the general elections are nearing.

“As we look forward towards 2019 when we will have new government let us begin a prayer campaign for our country from May 13, 2018, which marks the anniversary of the apparition of the Blessed Mother at Fatima, consecrating ourselves and our nation to the Immaculate Heart,” the circular read.

“I request that we observe a day of fast every Friday of the week by forgoing at least one meal and offering our penance and all our sacrifices for our spiritual renewal and that of our nation.”

“Moreover, I earnestly request that we organise an hour of Eucharistic adoration every Friday at a convenient time in all our parishes, religious houses and institution specifically praying for our nation.

During this Adoration the enclosed Prayer may be recited”.

Let us, as non-partisan minds, note the following:

1) In paragraph one of the letter as quoted above, the Archbishop’s diagnosis of the current Indian scenario is simply, verbatim, borrowed. (I hope he does not pat himself on the back for making an outlandish discovery.) This is what has been said by a host of thinkers, jurists and citizens of diverse hues, in recent times.

2) In paragraph two, he is urging his flock to pray, and not asking them to vote for a particular party. (I admit, however, that praying could predispose a person in a particular way.) It is the basic duty of an Archbishop to urge people to take their religious life seriously, which includes praying. The Bible says, “Pray without ceasing”. Prayers are said every Sunday in every church, throughout India, for the president, the prime minister, the cabinet and all those who administer the states and union territories. So, the people who heard the Archbishop’s letter read out to them would have felt nothing unusual about it.

3) In paragraphs three and four, he prescribes fasting as a desirable spiritual discipline for preparing towards the 2019 elections and supplies them with a prayer.

My problem with the letter

1) Given the habitual inclination of the Church hierarchy towards a political party — the Congress — the "pastoral" exhortation of the Archbishop is apt to be seen as political.

2) The Church does not have a proven track-record of exhorting the flock to vote for the most honest and dignified candidate in the fray.

3) Christians, unlike their brethren in other religions, are politically inactive and indifferent outside of Kerala. This is well-known. So, the import of this letter could easily, and understandably, be seen as "mobilization" against a particular party.

4) As far as I know, for the Church, "secularism" is a convenient shelter; it does not believe in secularism. The Church hierarchy is inherently un-democratic. So, the credibility and intellectual authority of the Archbishop, as an archbishop (distinct from the individual he is) — to exhort the flock in respect of secularism is rather suspect. I know Archbishop Cuto personally and think well of him; but here I am commenting on the Church hierarchy in general.

5) The letter stands, going by its general drift, on a magical idea of prayer. It is superstitious to tell anyone that by simply sitting and praying in a corner, without developing their moral stature and courage to act according to convictions, any situation can be changed or an impending calamity averted. Prayer has only two functions: (a) self-purification and (b) preparing oneself for action based on truth and justice. The tendency prevalent in all religions to palm off everything to God may be religious, but it is anti-spiritual.

6) I disfavour prescribing prayers. The prayer that the Archbishop wants his followers to recite is "his" prayer. (I do not know the text of this prayer.) It is different from people saying their prays. It is Archbishop Cuto praying through a million mouths. It could have been avoided. There is no harm in trusting the people’s spiritual aptitudes and sense of responsibility.

Even though I feel that the Church hierarchy does not have the conceptual credibility to root for secularism, or strike a blow in defence of democracy, all right-minded people, across religious divides, would welcome this, given the fact the diagnosis on which the letter is premised — peril to secular democracy — is sadly real. But it is not only against one party or political block that we need to be vigilant.

Christians need to introspect if we really promote a secular culture through any of the means, including the media, available to us. Rather than treat this as an exclusive, in-camera, Christian issue, the Archbishop would do well to enter into a partnership with leaders of all religions, especially of Hinduism, to form a spiritually authentic bulwark for defending and promoting what is best for our country.

His idea that there is a connection between the purity of the people and the kind of political dispensation that will come into being is absolutely and historically true. The moral decay of society invites oppression for itself under the yoke of tyranny. Constrains of space does not permit me to examine this in historical particularity.

Even so, the Archbishop is being a bit of an ostrich in assuming that people need to be pure only on occasions and for expedient purposes.

You can’t cherry-pick seasons to be pure and impure.

I am sure the Archbishop will agree with me that the Indian Christian community is at its worst-ever state of spiritual disarray and vulnerability. It is in fact his apprehension — not ill-founded — that they are too weak and unprepared for the challenges ahead that makes him so overtly anxious.

I am absolutely convinced — and my friends in the BJP can take heart on this — that such prayers are wholly bereft of any spiritual or godly power. I can understand that they are worried, especially given the way the political wind is blowing, that this could dent their electoral prospects.

This apprehension, let me assure everyone, is greatly exaggerated. The number of constituencies in which Christians are a decisive force are ridiculously small. Even more importantly, Christians are most disunited and rebellious. If they are in fact asked for one particular party, they are sure to vote for its rival party.

The extreme resentment expressed by certain quarters is quite simply hypocritical. Every party visits vote-swinging leaders of various religions “to seek their blessings” in the run-up to elections. Why these religious satraps can bless only during the election season is riddle I haven’t unraveled.

So, broken down to the core issue, it amounts only to this: who should have the monopoly to benefit from communal mobilisation?