Dilli, meri jaan: How I survived a brutal attack in a public park

Injuries can be defining moments, even more so if resulting from criminal assault: that one moment when someone chooses to push you and clobber your head in a hate- or love-induced haze.

“Lucky you,” said the anaesthetist to my sister. My sister who had, hours earlier, spared the terrified nurse by hacking away with a pair of scissors at her sibling’s blood and vomit-soaked clothes to prepare for the neurosurgery.

“She has come out of the operation breathing on her own,” said the anaesthetist, “And she is responding to pain. Both are very good signs.”

I might be held personally brave, but courage had little to do with it. My sister made quick decisions urged by anxiety written on a young doctor’s face at the government hospital to which a surprisingly-efficient Delhi Police carted me. I had gone to a public park for an evening stroll when I was pushed to the ground and attacked. The sound, and the feeling, and the taste of continuous bleeding and retching has stayed with me.

A sea of vomit, and blood. And, through that fear, repeatedly reciting my sister’s mobile number.

A shortage of ambulances

The Police Control Room (PCR) van took me from the park to Deep Chand Bandhu Hospital, where a capable-but-anxious Dr Amit did what he could, but impressed upon by my sister and cousin brother, who arrived soon, that his hospital did not have the neurosurgery skills or infrastructure needed to save my life. Dr Amit’s sense of urgency increased when I began vomiting blood.

His main aim was to prevent me from going into shock, which leads to coma.

The young doctor then asked the police to find an ambulance; the family decision having been made within seconds — as a result of a phone call to my doctor brother-in-law boarding a flight — to shift my bleeding body to Fortis. Those vehicles with red beams that tail-gait your car in Delhi, who you — a tad nastily — don’t make way for, are not so easy to find at night. Not a single ambulance, government or private, was to be found.

Delhi Police came to our rescue and shifted me in another PCR van, with the driver’s seat positioned as close to the windshield as possible to make way for the stretcher at the back. Dr Amit, bless his noble heart, accompanied my inert, mumbling, by now seriously-losing-blood self. An ambulance met us half way.

The private hospital’s expert neurosurgeon, Dr PK Sachdeva, cut me open and sewed me up. He shaved through my short hair, drained blood, and picked out skull bones and displayed them to my sister on the vigil outside, after a surgery that lasted hours.

By then my lawyer uncle had arrived with suitable food and nourishment for her.

My stay at the intensive care unit was short, buoyed by the capable Malayali nurses that form the backbone of our healthcare industry. But I didn’t get off a second too lightly; around me, a mother was angry with her son, enacting an Ekta Kapoor-like drama, whereupon the son marched into the ICU to feed her. An old patient on the bed opposite summoned my sibling and asked her to take me away “this instant” as I had spent a restless night.

Two doctors, not realising I was conscious, and awake, strolled by. “Sar ke cheethre ure huye the jab paunchi thi. (Her skull was in shreds when we operated).”

Pipes went in and pipes came out. Of my body.

But the pain didn’t take the cake. What took the cake were members of my fraternity. 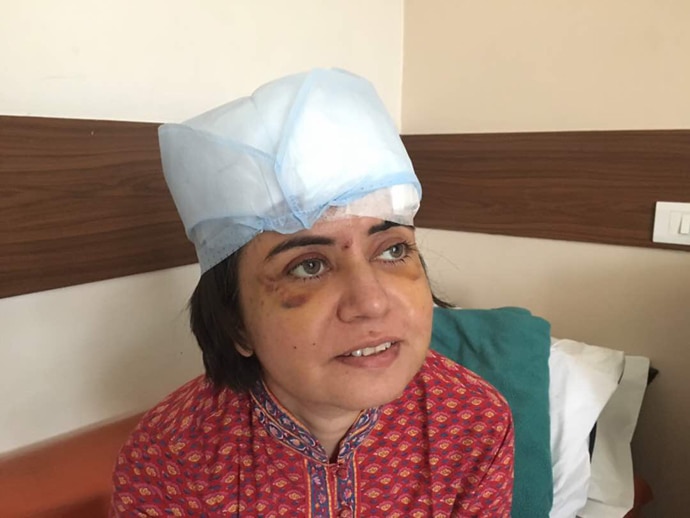 When kindness and urgency and capability were needed, Delhi gave me all of that. Photo: Aparna Kalra

Journalists arrived in droves. A few came because of genuine warmth and concern. They were circumspect, and respectful of my family and the stress it was going through.

Some wormed their way into the ICU and demanded, yes, demanded that they see me. No amount of persuasion could convince them that doctors considered visitors a jeopardy to my health. My head was vulnerable, would take days to heal and till then I risked getting infected from any or each visitor.

They wanted to wave to me from a distance, and accused my sister of not “giving access”, or of not being kind enough to feed the conspiracy theories that they had come up with.

“What, no one requested for a selfie?” wise-cracked a friend later.

Now I am healing at home, slowly regaining a lost sense of balance. The spinning room terrified me at night. But with strong medication, of late, it has stopped spinning. A sense of loss of control over my future, of being the recipient of mindless violence, which upended my normal life, and threatened my existence, fills me with dread, especially at night.

He attacked me during the twilight hours and now I am afraid of the dark. Afraid of stepping outside the safety of my home.

The bruises on my face are subsiding. My half-closed left eye opens. The stitches came off this week. A new doctor, bending over me while the nurse held my hand, reacted: “How many stitches do you have?”

I will need reconstructive surgery, and a titanium plate in my head, later. My sister assisted me during my first shampoo because I half-joked it would seep through my damaged skull. Caked blood came off with soap.

Meanwhile, the entire family has used its ingenuity to stave off visitors driven by morbid curiosity in the crime. “Kya hua?” was the refrain. A handful of friends close to me have made the effort to help me get a grip on my mental struggle and trauma.

Doctors are keen for me to get back to work as quickly as possible. And resume "normal life". All my prayers are filled with gratitude. That Delhi’s emergency services worked to keep me alive: from the constables in the PCR vans to the cop who slung me on his shoulder to those who allowed Dr Amit to convert the PCR van into an ambulance, to the expert team at the government hospital that did not allow my body to slip into shock, to the nurses and care, and the midnight surgery of Fortis.

To the Delhi Police's woman DCP who ultimately recorded my statement. To her police team who went without sleep to comb the park for the assailant. When kindness and urgency and capability were needed, Delhi gave me all of that.

The city hid its warts and welts to let me heal mine.

Now, if only it could go a step further and show the courage to raise men who don’t take pleasure in squishing women to a pulp.