Our gold culture has turned into a rude snub to the underclass.

Many of our gilded historical gurdwaras have dedicated tourist chambers. Foreigners walk into them, take advice on dos and don'ts before they step into the sacred compounds with guides.

But this service is largely available for visitors from wealthy nations, mostly light-skinned. I am not sure how multifarious it is. I am not sure whether black tourists are accorded similar facilities and attention.

Forget tourists from Africa, I am not sure how many attendants are on duty for non-Hindi- and non-Punjabi-speaking visitors, such as from Tamil Nadu, Kerala, Odisha or from northeastern parts. Perhaps many of them come to gurdwaras for a genuine spiritual experience and not as another stopover on their holiday itinerary.

If these missing links are not an administrative oversight, it makes me wonder whether community elders have adopted the capitalist mandate on purpose.

If we dive into the history of the Sikhs from the early half of the 19th century to post-independence India, we can clearly see how we have sanctified wealth and power in religion.

It goes without saying Sikh doctrine is no worshipper of the rising sun or the goddess of wealth. Rather, it critiques them. That's because absolute power and excessive wealth have traditionally been antithetical to egalitarianism.

Unlike what's depicted in images, the gurus and their families lived an austere life. They practised what they taught. The language of Sri Guru Granth Sahib is the vocabulary of humanity and solidarity and not corporate jargon.

Sri Darbar Sahib in Amritsar, whose construction was completed by the fifth guru, Guru Arjan, was not golden when it was built. It's gilding was commissioned by Maharaja Ranjit Singh. 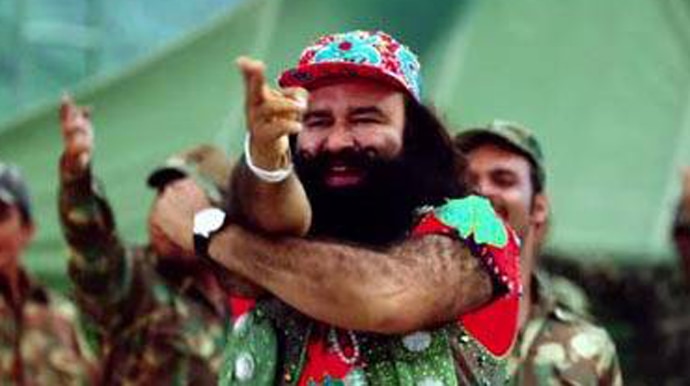 It would be unethical and inappropriate to brand every Dera in and around Punjab a fraud like rape convict Ram Rahim Singh's.

“The gracious Guru through his benevolence considering Sri Maharaj Singh Sahib as his loving follower and servant got this work executed by him,” reads an inscription at the entrance of Sri Darbar Sahib, which later came to be known as the Golden Temple to the world outside.

Let's note the distinction here: It was a maharaja - not the guru - who sought to cover Sikh spirituality with an aura of expensive aesthetics from his treasury.

But over the past half-a-century, the Sikh political class has shrewdly manipulated that 19th century royal gift to breed and feed superstition about charity and its use.

The Sikhs - ordinary and elite alike - unfortunately fell in thrall of this dogma of extravagant donations crafted by administrators of their religious institutions.

Very much like the corporate world pulling the strings of governments across the globe, the community's upper class rapidly instrumentalised this form of charity to control religious power by proxy.

As disparities mounted in the wake of economic liberalisation, the poor and the underclass among the Sikhs fell out of this race of regal offerings.

Capitalism overpowered socialism. Media too carried stories about "prominent" Sikhs as a benchmark of commercial success.

Some even floated confusing narratives comparing the Sikhs with the Jews when there's hardly any similarity.

The real ownership of religious institutions virtually fell into the stranglehold of a few wealthy people.

Gurdwaras began to look more like glittering palaces than sites of precious literary and spiritual heritage.

The entire focus of Sikh charity was shifted to their beautification and gold-plating, elevation of the downtrodden pushed to the back burner.

Consequences have been bewildering. Deras, including the ones led by the likes of Gurmeet Ram Rahim, lapped up the marginalised.

They offered their children free education, healthcare and even organised mass weddings.

It would be unethical and inappropriate to brand every Dera in and around Punjab a fraud like rape convict Ram Rahim's.

They might be engaging their followers in human worship, which is blasphemy in Sikhism, but they are also offering them a support base to build their lives.

One of the very few Sikh institutions that have come out unscathed by this five-decade invasion of capitalism is langar - free meals for all on a common platform.

From the stateless Rohingyas to war-torn Syria, langar stands out as a towering symbol of humanity and equalitarianism that the gurus espoused.

But the Dera phenomenon has underscored the need for the community leadership to go the extra mile.

It would be delusional if it still continues to advertise langar as a manifestation of overarching equality in our institutions.

Langar and sewa or volunteerism are primarily living and thriving because of the humble, ordinary Sikh sangat and not as a courtesy of gurdwara governance.

In a piece I had written earlier, I talked in detail about how caste stratifications have punched a gaping hole in the Sikh commonwealth.

With due respect, I now have seven questions for the heads of the Shiromani Gurdwara Parbandhak Committee, the top Sikh religious administration, and its Delhi version, to ponder upon:

1) How many students are getting free education in SGPC, DSGMC schools, colleges?

2) What is the strength of lower-income pupils?

3) What is the size of downtrodden representation in management and faculty?

4) What programmes, if any, are underway to promote Sikh heritage in languages other than English, Hindi and Punjabi?

5) Do you have any plans to discourage gold donations?

6) Do you have any plans to encourage investment in human development?

7) How do you plan to promote simple weddings in the community?

Dear SGPC chief Kirpal Singh Badungar, you can share the feedback anytime. After all, it might be a matter of common concern to detect the flight of human capital from the Sikh faith because of our promiscuous embrace of market capitalism.

Post your comment
#Capitalism, #Dera, #Gurmeet Ram Rahim Singh, #Sikhism
The views and opinions expressed in this article are those of the authors and do not necessarily reflect the official policy or position of DailyO.in or the India Today Group. The writers are solely responsible for any claims arising out of the contents of this article.