Don't subject the Great Indian Bustard to politics of hate

The headline 'Pure Pakistani Evil' published in DailyO was, to me, shocking, designed to inflame passions at a time when we most need peace and calm. In the piece, to me it appeared the writer had made a scapegoat of a bird — innocent of any artificial nationality, and a victim of citizens on both sides of the political border that divides two nations — in this case, India and Pakistan.

The story says that the Great Indian Bustard (GIB) — a critically endangered bird of which just about 100 remain in the wild and in the world — is being targeted and killed in Pakistan, among other reasons, because of the ‘Indian’ that is embedded in its name.

Before I list what is wrong in the story, let me briefly explain the status of the Great Indian Bustard. You may also read a more detailed account here.

Once widespread across India’s grasslands and dry rural landscapes, the ostrich-like Great Indian Bustard (GIB) has disappeared from across 95% of its former range. The Thar Desert is the last — even if precarious — stronghold of this species. About 70 birds are to be found here. The bustard has been battered by habitat loss due to roads, highways, mining, canals, agriculture, mismanagement of its habitat and ‘greening’ projects that transform its arid grassland habitat to wooded areas, rendering it hostile for the GIB. An increasing and fatal threat is the dense network of overhead power lines from renewable and conventional energy power projects. These criss-crossing high-tension power lines have become a death trap for the birds that fly low to the ground and have a limited field of vision.

The GIB is endemic to the Indian sub-continent, and the birds, like all wild creatures fly free over international borders, in this case into Pakistan’s Cholistan desert.

1.) “Our neighbours across the borders do not hesitate to kill just soldiers and civilians, but also the poor bustard — not so much for its meat and for sport, but for bearing “Indian” as a part of its name.”

Yes, the birds are hunted in Pakistan — in fact, a conservationist in Pakistan writes that of the 63 birds sighted in four years (2001–4), 49 were poached, though there are no reliable records to authenticate this information.

What may have also been killed is the Houbara Bustard, a tad smaller in size, and with a slightly higher population. It’s still terrible and must be condemned, but it may be worth noting that there is no ‘Indian’ in its name. And despite the headline, there is nothing, no data, no quotes, no information in the article to indicate that the bird is being killed because it has ‘Indian’ in its name.

This assumption is not substantiated, and all it seems to be doing, as I see it, is hate mongering and fanning outrage, encashing on the tensions, currently at a high, between two countries. But why target a bird, which has no nationality?  Birds are symbols of peace, not hate.

At the risk of repeating myself, I am not disputing the fact that both the GIB and the Houbara Bustard are killed in Pakistan.

The country must be taken to task for this at appropriate forums, nothing justifies the killing of an endangered wild creature.

Writing unsubstantiated, even inflammatory articles will only accentuate the fragile status of a bird that flies across hostile territories. And hunting is an issue in India as well — though at a much lesser scale. In December 2012, a GIB was gunned down by hunters in broad daylight, just a few yards from the Sudasari enclosure, within the Desert National Park in Rajasthan. 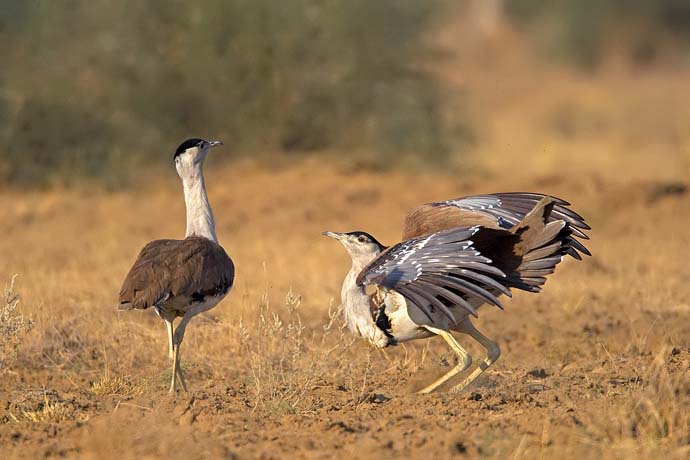 The Bustard's habitat is increasingly under threat. (Photo: Reuters)

3.) It glosses over the real issues that confront the bird. The truth is — both countries are to blame for the plight of the bird — and India must bear the greater burden.

The fact is that we have failed to keep the Great Indian Bustard safe in India. It is not just the gun that kills, there are a million ways to down a bird. Transmission wires are fatal to the bird. Between 2007-2017, at least 10 GIBs were killed by collision with the transmission line. This is where the bodies were recovered, other deaths go unreported.

The only male of the doomed GIB population in Kutch, Gujarat has been missing for the past four months. Lost, presumed dead. With just about 150 birds remaining in the wild, each death inches the bird closer to extinction. In such low populations, even one unnatural death can cause extinction in three generations.

Despite knowing the bird was slipping into extinction, and knowing solutions that need to be implemented to save the species, India has failed to protect the GIB and secure its last remaining habitats. It rendered its grassland habitat, crucial to the survival of the GIB, as ‘wastelands’, and these are being destroyed relentlessly. The last fragmented patches that remain are criss-crossed by transmission lines. The Wildlife Institute of India estimates that 18 GIBs are likely killed by collision with these every year in the Thar Desert.

We have known of the GIB's plight for the past 60 years, if not longer. The first meeting of the Indian Board of Wildlife in 1952 records grave concern over the rapidly dwindling numbers of the GIB and asked for urgent intervention to save the species. The international community has been urging the Indian government to respond to the GIB’s alarming situation. But, except for a surge of activity in the 1970s, we have stood by and watched this bird slip further into the precipice. Recently, a collaborative public awareness campaign launched in December 2018 by Sanctuary Nature Foundation, The Corbett Foundation and Conservation India has brought together over 10,000 Indian citizens concerned for the bustard. They are demanding that the Ministry of Power place the most threatening sections of powerlines in the GIB habitat safely underground, but their call has gone unacknowledged by the Ministry.

It will be a shame if, or more likely when, the Great Indian Bustard becomes extinct under our watch.

Before we point fingers at Pakistan, we need to reflect upon our own lack of political will to save the species from extinction.

I say this as a citizen of India, one whose loyalties lie not only to the country, but to Nature, which knows no boundaries, and which is our collective heritage.

No country owns wildlife, yet it ‘belongs’ to all of us, it is our collective responsibility and the natural heritage of all citizens of planet earth.

4.) Birds are messengers of peace, not hatred.

The need of the hour is better coordination between both countries, and forests officials and conservationists on both sides of the border have suggested this. I have met with senior forest officials in Pakistan and discussed the Great Indian Bustard with them, at an informal discussion at a meeting in Kyrgyzstan. They expressed concern over its precarious status, and I was reminded of the despair of the officials and staff of the Desert National Park which I visited last in December 2014. Their efforts on the ground, to keep the bird safe, under grim conditions, can only be described as heroic.

Political tensions stop us from cooperating to save this bird, but issues of conservation should rise above politics. We all need nature, and equally, its destruction impacts us all.  I don’t mean only the GIB here. Effectively conserving the Himalayas from which life-giving rivers flow into India, Pakistan-and other countries, protecting rare wildlife like snow leopards, kiang, leopards and markhor which cross over human-made borders, and mitigating climate change are dependent on international cooperation and collaboration. Many countries have declared transboundary peace parks and transboundary conservation landscapes in the interest of protecting shared natural heritage — why not India and Pakistan?

Is it anti-national to talk peace between two bitterly warring countries — separated at birth — especially when we so tragically lost our CRPF men to a terrorist attack? Or is it more prudent to veer towards possibilities of cooperation and peace, so no more lives are lost?

I do not need to stress at my distress at the horrific attack, mourn the loss of our bravehearts, and am as enraged as any Indian at this horrifying, cowardly act of terror.

Yet I can’t find it in my heart to make innocent wild creatures a scapegoat for our hatred and our wars, our jingoistic nationalism, and divisions of bloos. And isn’t it truly patriotic to save a bird, especially one that bears Indian in its name?

Don’t fan hatred on the wings of a bird flying into oblivion.