The (real) mole in the education system

Schools, being an integral component of the education system, have their own set of anomalies. But it is surprising how schools can actually behave like kindergarten students themselves — requiring somebody to tell them what is wrong and what is right.

There are schools which wait for someone to wake their conscience and remind them that students are not just numbers to be counted as admissions. Perhaps, being apparently inanimate structures without a soul, they do not have a mind — or eyes with a vision of their own.

They always need a trigger to react — be it on children's safety or on administrative issues that should have been routine. Their reactions to situations remind one of how the popular game of ‘whack-a-mole’ is played at amusement parks or shopping mall gaming arcades.

Both children and adults love to play ‘whack-a-mole’ because the rules are so simple.

One has to wait for a mole to raise its head through a hole in a platform and ‘whack’ it with a padded mallet before it can duck below the platform again. It is a game not to be taken lightly because it does require perfect hand-eye coordination, speed and concentration. The moment a mole is whacked, another comes up.

It is great so long as it is limited to a game.

However, the ‘whack-a-mole’ approach is used extensively in our education system — particularly by schools.

Schools deal with problems that are seen as moles — to be whacked when one appears, and then, wait for the next one to appear. Sometimes, even the spotting of the mole is not automatic and someone else has to point it out for them to realise that there is a mole (the problem at hand). This nudging can come as complaints by concerned parents, government circulars and sometimes, the mole is only spotted after an order by the Supreme Court.

The circular from the Ministry of Human Resource Development, asking schools to formulate guidelines to regulate the teaching of subjects and the weight of school bags, was icing on the cake. Neither could the schools deny the huge bags that students carried to school every day, nor could they overlook the effect this had on the health and physical development of children. Naturally, they could not escape the mole that had to be whacked. It is quite sad to witness little children going to school early morning with huge bags bursting at their seams, heads bent forward, shoulders straining against the weight, the bags extending till well below the waists of the smaller children. The Centre has asked schools to adhere to guidelines capping the weight of school bags. (Photo: Reuters)

Carrying school bags are a routine — but carrying overloaded bags from such an early age is a health hazard, which the schools themselves had disregarded all these years. And suddenly, with the government circular, the weight of the bags has halved.

It makes us wonder how the schools could succeed in reducing the weights of the bags now when the topic was always brushed aside during parent-teacher meetings earlier.

Similarly, children's safety suddenly became the topmost priority in schools following the gruesome murder of a seven-year-old boy in Gurugram. Identity cards have been made compulsory for students and staff members, CCTV surveillance systems have been put in place, and the safety of the students is being given utmost importance. 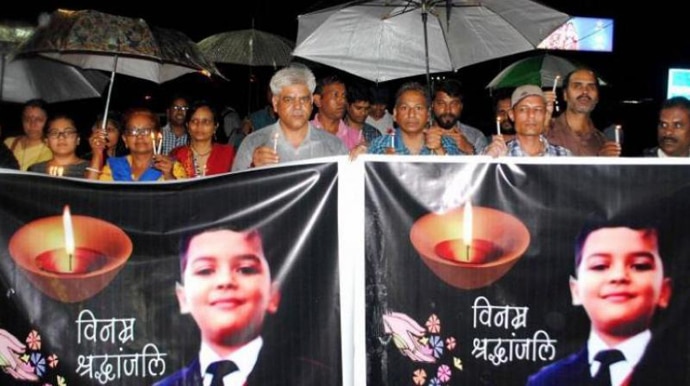 A seven-year-old was murdered at his own school in Gurugram. (Photo: PTI)

It is sad that it took the tragic loss of a young life for the schools to wake up and ensure the safety of children when the National Policy for Children — declaring children the ‘supreme national asset’ — was announced way back in 1974.

The recent news about the Air Force Bal Bharati School reportedly expressing its obligation to provide free education to students from economically weaker section only up to class VIII and sending notices to parents whose wards were in higher classes to make ‘suitable arrangements’ to start paying full fees or take the students out from the school is totally unexpected as well.

Under the Right of Children to Free and Compulsory Education (RTE) Act, 2009 all private unaided schools have to keep 25 per cent of their total seats in entry-level classes reserved for Economically Weaker Sections (EWS) students. Article 21-A in the Constitution and the RTE Act specify that the appropriate government and local authorities provide and ensure admission, attendance and completion of elementary education by all children in the age group of six to 14 years. Elementary education is up to class VIII.

This makes many of us wonder why the Act has not covered anything after the age of 14 or class VIII?

How will the parents make arrangements to pay the fees thereon — and if they fail, where will the students go? Can you shut the gates to education after a point? (Photo: Reuters)

This tells us a lot about the reactive management style of the government, schools and the approach of those who have been entrusted with the task of planning. Either the system or the schools couldn’t visualize this problem earlier when the Act was implemented — or the system assumed that education up to class VIII was sufficient for students from the EWS.

Either way, we have a big mole raising its head and the education system at the end of its wits on how to address it.

The schools cannot wish this away, saying they were obliged to follow the RTE Act — which, in itself, is incomplete.

Whacking the mole alone is not enough. We need measures to plug the hole.

The system is now playing ‘whack-a-mole’ with the future of the country — it is time we stood up.

The education system and its minders need to know that we as parents and concerned citizens don’t want to play anymore — we are done with all the nudging.

Unless the holes get plugged, there will always be a mole raising its head.

Also read: If school education is a market, parents are customers! But how many private schools adhere to the customer?