Where have all the feminist men gone?

Feminism is not just about women. It is about breaking gender stereotypes that confine people into limiting roles.

I have heard a lot about the growing tribe of feminist men, but haven't met one yet. And that shocks me a lot. Do men not believe in equality? Or is it the idea of identifying themselves with a word that has a female prefix which scares them?

Every time I ask this question to my male friends, they tell me why should they be concerned with something that's all about women? Or how does it affect them?

The answer is that feminism is not just about women. Feminism is about equality and breaking gender stereotypes that confine people into limiting roles. And no, "humanism" or "meninism" doesn't change the reality.

The issue of discrimination against women deserves due attention. But drawing attention to the fact that women are underprivileged does not mean that we want to be superior to men or that we hate men. We love our fathers, brothers, partners and friends. Our world at work and outside home is full of men. If we hated men, that's a lot of hate to be living with. 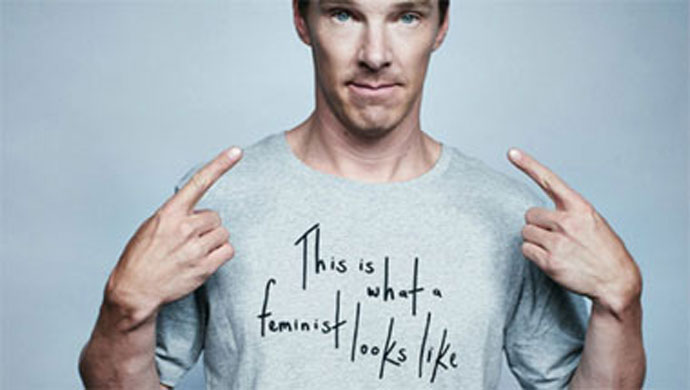 Feminism is not just about women.

Perhaps because patriarchy has been around for so long, feminism is seen as its counterpart. But it simply is not.

Patriarchy means that men are superior and have the locus of control. Though stifling in many ways, patriarchy has also been a source of protection and support for women for ages. Whether social status or economic protection, men have been women's providers and caretakers for centuries. These are the plus points, but there are a lot more minus points. When you see someone as dependent, they automatically become lesser and you naturally dominate and control.

However, feminists also realise that patriarchy puts a huge load on men. Have you ever felt that you don't want that gruelling job which pays your home EMIs, and would rather be a homemaker but can't do it because "what would people say"?

Have you lost a relationship because your girlfriend can't be the "bahu" that the society wants to see in her? Do you secretly want to be a nurse or a teacher or choose some other profession which is labelled too feminine?

Do you routinely get judged by your profession or your income in relationships? Do you struggle with expressing your emotions and dealing with them because showing emotions is a sign of weakness for a man?

If yes, then you're a victim of gender stereotyping and you need to hop on to our side.

I could say worse. I could tell you that you may get sexually assaulted and yet people would laugh at you disbelievingly because you are a man. That's the kind of discrimination and stereotyping prevalent in our societies. Just to put things in perspective, in the US it was a feminist group that campaigned to change the definition of rape to include men.

While the socio-cultural reasons for being feminist are compelling, the economic reasons too are. In her book, Lean In: Women, Work, and the Will to Lead, Sheryl Sandberg explains that the quickest way to get a society out of poverty is to get more and more women into the workforce. They not only lessen the man's burden but lift the entire family.

Naina Lal Kidwai, in the foreword to this book talked about a town in South India where women were employed in factories. In a short span of time, the town saw that the men's workload was lessened and their families too were better off.

Feminism is not just a movement, but also an attitude. It involves change (that is often threatening) for both men and women. But why on earth, wouldn't men accept something that expects more out of them, but also gives them more respect?

#Patriarchy, #Women's Rights, #Feminism
The views and opinions expressed in this article are those of the authors and do not necessarily reflect the official policy or position of DailyO.in or the India Today Group. The writers are solely responsible for any claims arising out of the contents of this article.