This impending disaster was unfolding before our eyes and, surprisingly, nobody seemed to care.

I have this journalist friend who came up to me the other day.

She was like, “Psst! Listen, can I tell you a secret?”

Nervously wringing her hands she confessed, “So I have to do a story on the budget for my paper but I don’t actually understand how the budget process really works, or what to look for. I heard the finance minister’s budget speech and I am going to write a report based on it. But you seem to be going deeper, so please help me and give me something unique?”

I did give her meat and she did use it.

If my journalist friend here went solely by what the finance minister said in Parliament on Budget day, she would have never known the kind of shady things that were hidden within. On that day, he said this about electoral funding:

If you go by the speech, it gives an impression that the government is trying to make political funding more transparent to ensure a free and fair election. Nope. It’s actually the exact opposite.

This move makes electoral funding more opaque by creating a new instrument, called “Electoral Bonds”, especially for political parties. But to understand all of this, one needs to read the fine print of the Finance Bill, 2017.

Trust me when I say this, nobody reads the Finance Bill.

Even last year, the finance ministry managed to shove in an amendment into the Finance Bill, which allowed donations to political parties from foreign sources. If anyone in the government actually goes out and tells people about these new laws, they will cringe. They will be shocked. They will scream. They will run around telling others. So the administration simply chooses not to talk about it. They have faith in our collective ignorance and laziness.

They know nobody reads the Finance Bill.

I get it. Laws are complicated and boring. So unless you’re someone like me, whose job is to go through these proposed laws with a fine toothcomb just to find loopholes, you would avoid it all like a stinky dead rat.

The big question is: Why aren’t journalists who cover Parliament doing the same? Why aren’t they the ones informing people?

I have a few theories, allow me to elaborate.

First, journalists don’t want to take the effort of going into the details of each policy. It’s not their fault and I’m not blaming them. It’s just the way this click-baity, TRP and ad-driven news world works.

News organisations are pushing journalists to do more stories that get more attention, rather than caring about the relevance of the content. And they want it fast.

Current reporting in Parliament is limited to reporters crowding outside Gate Number 3 of the Parliament building, waiting for some politician to come out so that they can shove a microphone in their face and get a sound-bite.

These sound-bites are rarely about laws being passed but more about the current trending controversy on social media and news channels. It’s just the news business, you see?

Laws are complicated and scary

Second, Parliament stuff seems complicated and scary. I still have a cringe-face when a voluminous bill is introduced and I have to work on it. It’s incredibly tiresome and boring.

I can imagine journalists who report on Parliament doing the same: cringing whenever a big law is introduced, complete with interconnected sections and complicated legal language.

Take the example of this insane amendment that was introduced in the Lok Sabha, at the last minute, before the Finance Bill was about to be voted upon.

Let’s do a demonstration of Bill reading.

For illustrative purposes, see this screenshot from the Finance Bill amendments (Page 22): To know the significance of this, a person needs to have the knowledge of the following things:

1) This is an amendment to the Finance Bill, which is a Money Bill. So one should know what a Money Bill is.

2) The Armed Forces Tribunal Act is NOT something that should be in the Finance Bill, so one should know that the Speaker can allow inclusion of this law by using Rule 388 of Lok Sabha Procedures: “Suspension of Rules”.

3) One needs to know what an Appellate Tribunal does. What is a Tribunal? What do they do? Why is the government trying to mess around with it? Why are they doing this now?

4) One needs to then flip all the way to section 179 of the proposed Finance Bill to understand the significance of this amendment. That, that is where the real meat

Quite intense, isn’t it?

The above screenshot contains just 10 lines from a 31-page document that was introduced, at the very last moment, in Lok Sabha. It’s a difficult task for MPs or journalists or anyone else to understand the significance of a law such as this and then put it in a simplified language that a common man and woman will understand. It’s even a way more difficult task to make it click-baity so that people will actually go and read it!

Another one is about the foreign funding amendment in the last Finance Bill (of 2016) is titled “FCRA and the Congress-BJP jugalbandi”.

You don’t need to be a lawyer to understand all of this, honestly. I am not a lawyer, I have no legal training, I’m basically not exactly the smartest bulb in the room.

But since it’s my job to read this day in and day out, I am now able to spot these strange anomalies quickly (and then find appropriate GIFs to express my emotions around those).

I literally start by being suspicious about every sentence in the proposed bill and try to eliminate my suspicions one by one.

It’s like a code language only they and their lawyers and their bureaucrats can understand. If you want to get to the bottom of it, you need to put in a considerable amount of effort. That takes time.

Time, which we don’t have in this fast-paced news world.

(Not) covering debates and discussions

Let’s leave the complicated laws aside for a moment, let’s consider the second part of Parliament reportage: the debates and discussions. That is comparatively easier to report because it’s just a bunch of elected representatives giving speeches and peacocking in their best possible way.

For example, let’s get back to the Finance Bill, 2017 which came up for discussion on Tuesday, March 21, 2017. The debate raged on for two days straight and the Bill was voted upon in the evening of March 22.

I was frantically tweeting the whole debate live.

Yesterday's #LokSabha debate BEFORE they introduced amendments to the Finance Bill. Today, they'll be voting on a totally new version. 1/ https://t.co/l6a5JTLGMX

I was tweeting all of this while watching Lok Sabha TV obsessively, which is available for everyone to see. This impending disaster was unfolding before our eyes and, surprisingly, nobody seemed to care.

And then came along Yogi Adityanath.

Guess what, the news media covered his WHOLE speech in Lok Sabha but did not care about the nine speakers before and the six speakers after Adityanath. The amendments making Aadhaar compulsory for income tax filing were circulated around the same time Yogiji was giving his magnificent Uttar Pradesh chief minister acceptance speech.

The speaker was doting over him too!

(Oh wait! So now if Adiyanath is in Parliament, will media actually cover the Finance Bill debate in #LokSabha?! Amaze. God Bless Yogiji.)

And guess what, no one in the news media pointed out the vital fact that he was speaking on the Finance Bill! Yet, the content of the speech he gave had literally NOTHING to do with the Finance Bill. Take a look at the Speaker’s list: 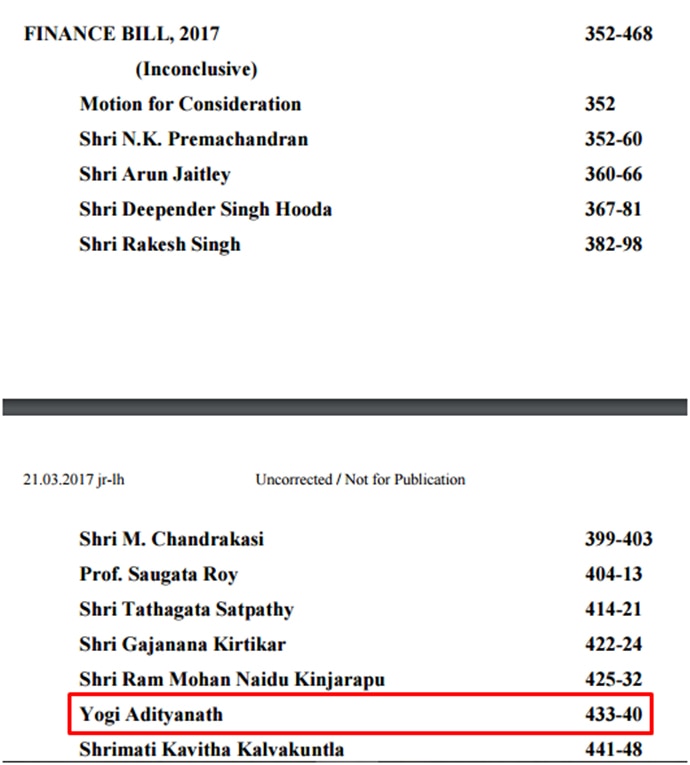 And now take a look at how it was being covered: 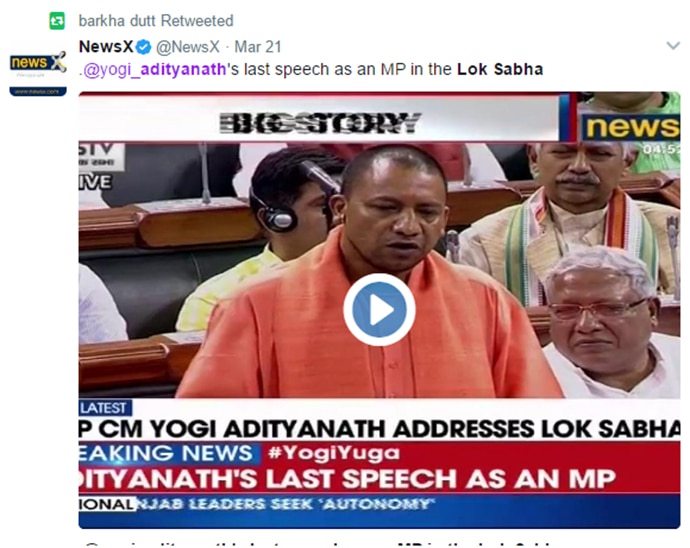 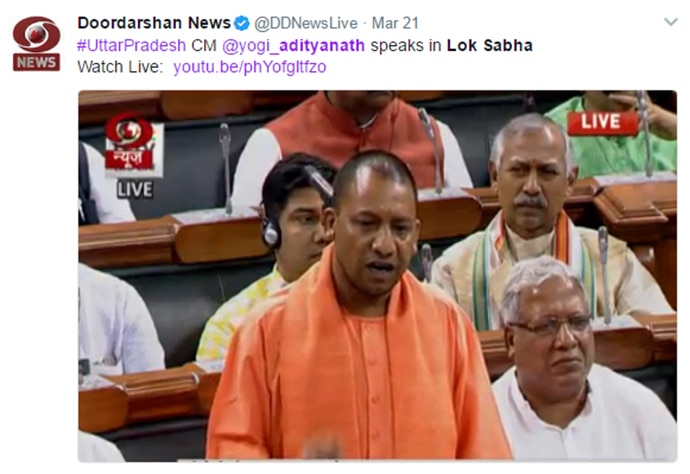 There was even a ticker running on Lok Sabha TV saying it’s a discussion on the Finance Bill, 2017. 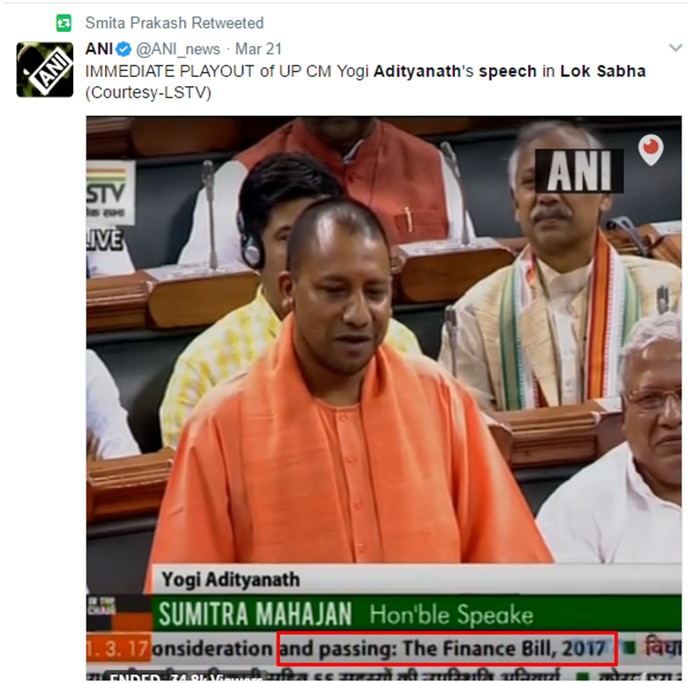 These are the basics of covering Parliament. Every reporter knows that a person can’t just enter Parliament and start giving a speech. Not even the prime minister can do that.

It’s not the wild, wild hinterlands of the Gangetic plains where cowboys are running around shouting at people who are eating meat. A proper notice has to be given to the Speaker, in advance, to speak on a certain subject under a certain rule.

Incidents like these make me wonder if these are the details that journalists miss out on, or if they just fall for the government propaganda and manipulation. The timing of Adityanath’s entry in Parliament, the way everything just seemed so coordinated, points towards the fact that this might be a game that was being played. With the media AND with the people. A game of obvious distraction and deceit. A game that ended with passing a law that was unconstitutional, invalid and simply draconian.

So, my dear journalists covering Parliament, allow me to give some unsolicited, respectful advice:

Post your comment
#Indian media, #Yogi Adityanath, #Finance bill 2017
The views and opinions expressed in this article are those of the authors and do not necessarily reflect the official policy or position of DailyO.in or the India Today Group. The writers are solely responsible for any claims arising out of the contents of this article.