The great Hindu revival has begun - and we must celebrate it

Red is dead. Saffron is on.

When the Mughals started ruling India, the land’s long-standing Hindu culture was already thousands of years old. Aurangzeb tried to destroy it in its totality, but ended up destroying his empire instead. The British followed and continued with the suppression of Hinduism, but couldn’t finish the job because they had to leave in 1947.

One would have thought that the great Hindu revival would finally begin that year, but it didn’t because of a certain gentleman called Jawaharlal Nehru who became our first Prime Minister. Nehru was a closet communist and that ideology believes in suppressing whatever culture a country has.

Mao Zedong taught his people to be ashamed of the glorious Chinese culture, which was thousands of years old. British and American communists are ashamed of Christianity, whiteness and their respective empires.

So in India, we were taught to be ashamed of Hinduism while the Mughal and British cultures were eulogised. If you don’t believe me then just go back to your school days and remember the history books which just went on and on about the Mughal dynasty, the communist revolutions and the many great benefits of British rule. 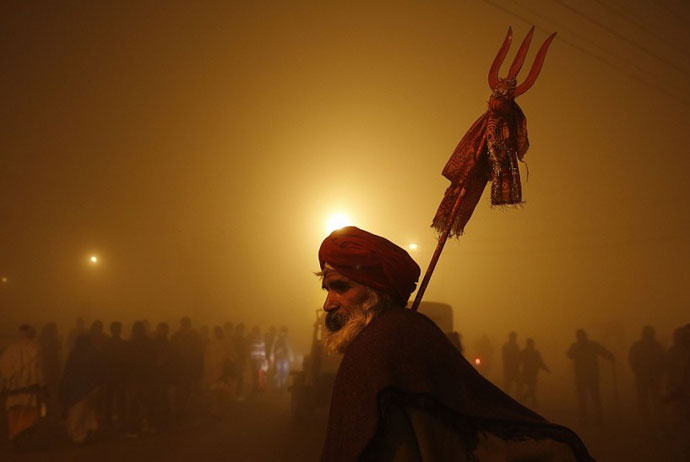 Hinduism was something that had to be kept at home and not to be displayed in public else you were branded a communal bigot. (Credit: AP photo)

The Cholas ruled the entire eastern coast of India along with Sri Lanka, the islands of Maldives and invaded areas of Malaysia and Indonesia. We are taught of the virtues of Mughal centralisation, but they did it hundreds of years before. Yet most history books in India reduced the Cholas to a mere paragraph in some cases.

All our founding fathers, especially Mahatma Gandhi, promised to implement a permanent and total cow slaughter ban across India and abolish English as the official language by 1965. Yet, nothing of the sort happened. If anything, we became more British than the British.

Hinduism was something that had to be kept at home and not to be displayed in public else you were branded a communal bigot. The RSS were a bunch of untouchables. The BJP due to its Hindu heritage couldn’t rule on its own and had to be “kept in check” by allies.That was the case till 2004 and Atal Bihari Vajpayee couldn’t change much and was happy to be part of the system. He was even dismissed as a “Congressi” by many hardline RSS supporters.

Sonia Gandhi through her 10-year UPA "rule" took it to greater heights after that. She was a Roman Catholic who hired a Sikh prime minister, a Christian defence minister and a Muslim foreign minister. While there’s nothing wrong with that, her hatred against Hinduism showed in more ways than one.

Right To Education is virtually a “Reservation in Hindu Private Schools” Act. She tried to introduce the Communal Bill which demonised Hindus. There was a further revision in history books and school textbooks which took Nehruvian ideals further.

#AdarshLiberals and the Left lobby were encouraged to criticise and even abuse Hinduism in louder and louder voices. Even in Bollywood there was a crackdown on scenes that merely criticised Christianity and Islam while Hindu abuse was cleared without a murmur.

However, all that changed overnight in 2014.

Narendra Modi is the first prime minister who proudly wears his Hindu nationalism on his sleeve. In the India of old, he probably would have taken his party to 44 seats in the General Elections, but that fate befell on the “secular” Congress while the BJP got 282 seats, unthinkable even in the 2000s.

Modi doing a Ganga aarti at Dashashwamedh Ghat in Varanasi celebrating his victory was symbolic in more ways than one. They say “Jaisa raja, waisi praja” (the people will be like the king). Well, more and more Indians are now wearing their Hindu nationalism on their sleeve and are no longer ashamed of their religion.

The RSS, hitherto a pariah confined to the Hindi heartland, is gaining more and more acceptance and is even spreading to areas in the south such as Kerala and Tamil Nadu along with the east and north-east. Now, more and more RSS members are holding key posts of the government.

It all culminated with the elevation of Yogi Adityanath as Uttar Pradesh chief minister. If Modi’s rise was considered next to impossible, then a saffron robe-wearing Mahant heading India’s most populous state was plain impossible. But it happened!

Pre-2014, Communism was mainstream and Hinduism the fringe.

More and more Hindus are taking pride in celebrating festivals. They totally frown upon the “save water” messages during Holi and the “smokeless-noiseless” Diwali calls. Just look at Twitter. Hinduism is celebrated and there was even a surfeit of the self-created Sanghi-verified saffron tick fan handles.

As I mentioned, the Left lobby suppresses the religions of their lands and their decline is not just in the India, but worldwide. The leftist Labour has been decimated in the UK. Donald Trump won in America. Marine Le Penn is a frontrunner in France. It’s a global trend.

Very soon the West will celebrate Christianity and India will celebrate Hinduism in a big way. Another reason is that Hinduism probably has the largest group of atheists (which the religion embraces) who kept quiet when Hinduism was being suppressed, but who now say enough is enough and have become much more vocal.

Yogi is not the end, but just the beginning. The Ministry of Human Resource Development is a big tool in manipulating education and the culture of the land. Smriti Irani was like a bull in a china shop and after she went, she was replaced by a more hardline Prakash Javadekar, who is doing even more changes.

Javadekar was with the ABVP in his student days and is more BJP than Irani. That he is quietly and swiftly going around with his changes without much controversy shows you how the Left lobby has already given up.

The political handbook. Academic textbooks. History books. The slow rewrite is on and looks to gather greater force in the future, especially since Modi has a good chance of winning 2019. The Ram Mandir agenda is back on the table and we are discussing whether triple talaq should be abolished or not. You couldn’t take both that seriously at the beginning of 2014.

Red is dead. Saffron is on. The great Hindu revival has begun.

Also read:Hinduism is dead. Shut the temples down

#Hindu Rashtra, #BJP, #Hinduism
The views and opinions expressed in this article are those of the authors and do not necessarily reflect the official policy or position of DailyO.in or the India Today Group. The writers are solely responsible for any claims arising out of the contents of this article.