Ever since a section of Muslims rampaged yesterday (July 5, 2017) in a part of West Bengal’s 24 Parganas district in reaction to what is being described as an objectionable Facebook post by a Hindu teenager denigrating Islam, there has been a rush by users of Facebook, Twitter and other social media platforms to condemn the violence.

Broadly, three categories of people have voiced their condemnation. The first category is that of the soft/hard Hindutva, the Islam- and Muslim-phobic/hating, whose reactions have largely been the predictable I-told-you-these-Muslims-are-hate-filled-fanatics variety.

The second category of condemners is of the voluble liberal Muslims who have consistently articulated a strong censorious line against Hindutva violence. These Muslims have long faced heat from Hindutva right-wingers for actions of the so-called Islamic extremists in the Middle East, such as the ISIS.

And the third category of condemners is of the liberal and progressive non-Muslims, mostly secular Hindus, who, too, have for years sustained a strong ideological challenge to Hindutva bigotry.

While I have little to say in this post about the first category, which has naturally seized upon the violence by the Muslims to push its long-running anti-Muslim agenda, I must point out the very tragic and alarming significance of the response of the latter two categories.

I am sure that both the Muslims and the non-Hindutva non-Muslims who have condemned the violence by the Muslims in 24 Parganas genuinely reject public violence under any circumstance. I have great regard for these sections of society on whom rests the burden of providing ideological and intellectual bulwark against Hindutva extremism.

But it also appears to me that the quick public denouncement of the West Bengal violence by the liberal Muslims and Hindus is in large part caused by their anxiety to not be accused of practising double standards by being silent on “Muslim” violence while agitating against the “Hindu” violence.

Many of them, in fact, are openly saying so and imploring each other to speak up now lest they be accused of hypocrisy. By condemning this Muslim violence they want to make sure that they are not caught at the wrong end of the game of “whataboutery”, so that if anyone from the Hindu right-wing accuses them of having double standards in the future they can quickly refer to these condemnations as proof of their non-partisanship.

It was this thinking that compelled such folks to quickly and loudly condemn the lynching of Mohammad Ayub, a police officer, in Kashmir last month.

Over the last few days, the liberal people have repeatedly pointed out that the “Not In My Name” protests in New Delhi had also visibly condemned Ayub’s lynching while denouncing the killings of Muslims by the so-called cow protectors. From the extensive news coverage to yesterday’s violence, it is evident that the rioting was spontaneous.

Unfortunately, however, by succumbing to this intense pressure of the if-you-condemn-that-you-must-condemn-this-too binary, the liberal Muslims and Hindus are creating and legitimising a very dangerous equivalence between the Hindutva violence and other violence such as the one by the Muslim mob(s) in West Bengal.

In truth, the two are completely different from each other. There is no equivalence between the Hindutva violence and what occurred yesterday. By equating the two, the liberals are absolutely falling into the trap that’s been shrewdly laid for them by the Sanghis and their camp followers. Here’s how.

From the extensive news coverage to yesterday’s violence, it is evident that the rioting was spontaneous and not planned; that no organisation or organisations that are known to practice or advocate or preach violence against non-Muslims over historical and mythical grievances organised or fuelled that violence; that the rioters or, indeed, the neighbourhood to which they belong and emerged from have no known history, past or recent, of extreme hostility to non-Muslims and of spoiling to launch religious violence against non-Muslims; that, importantly, the rioters are not known to have been looking for an excuse to attack non-Muslims from before the Facebook incident; that their violence was only in reaction to the Facebook post and not a consequence of any larger, long-running religious-ideological construct; and that, most importantly, the rioters were ordinary Muslims from perhaps the economically most backward sections who have little else but religiosity to sustain their existence and for whom the trigger was as real as was the trigger of Nirbhaya’s rape in New Delhi that brought tens of thousands of urbanites to the streets of India’s capital.

(That Nirbhaya’s protesters did not indulge in wanton violence is a pointless argument. Nirbhaya’s Delhi protesters were metropolitan self-aware folks led by pedigreed, entitled and articulate middle classes, and, therefore, managed better discipline.) 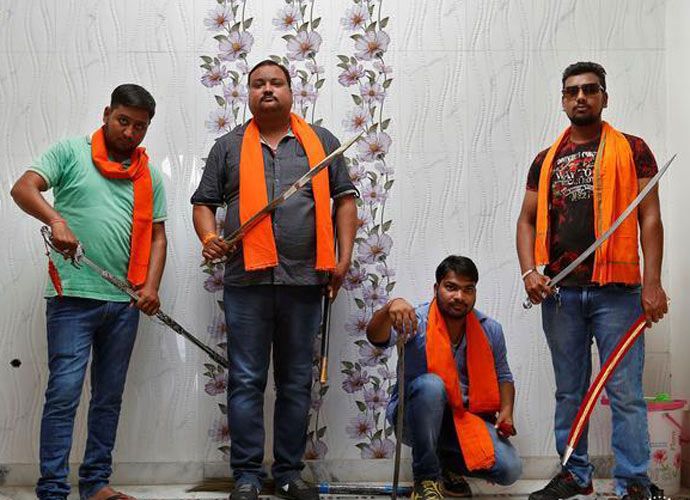 Even today’s gau rakshak squads are organisational units, and their activities, even though they are made to appear as spontaneous responses, are well calibrated and designed.

Now let us contrast that with the Hindutva bigotry and violence. India’s Hindutva violence is deeply organised. The RSS, a much larger cult that the KKK ever was in the United States, is a massive ideological banyan with tens of millions of active cadres across India (and, indeed, outside India, especially in the US and the UK from where they send enormous funding).

These millions of RSS cadres in India are fed hatred against Muslims (and, with only a slightly lesser intensity, against the Christians) on a daily basis, morning, noon and night, generation after generation. For nearly a century, the RSS and its affiliates have unceasingly practised a language of violence, threatening violence, inciting violence.

Most importantly, the actual violence that occurs in the name of Hindutva is nearly always — always! — organised, planned and executed by dedicated cadres. Even the so-called Hindu mobs that are said to be “spontaneously” responding to the “hurt” to their “religious sentiments” are cadres of Hidutva outfits such as the Bajrang Dal or the Vishwa Hindu Parishad.

Remember the violence against Muslims in Gujarat in 2002, in which at least 2,000 Muslims were killed and thousands more driven away from their homes and villages?

The Hindus who were eventually caught and tried for that violence were almost all members of this or that RSS-affiliated organisation. All of that “spontaneous” violence was, in fact, planned meticulously with a call to arms.

Ashish Khetan’s sting operation of 2007 conclusively proved that. A decade before the Gujarat violence, the demolition of the Babri Masjid in Ayodhya, an event I witnessed in person, touted as a “spontaneous” response of the “hurt” Hindus, was actually carried out by cadres of the RSS.

Mr LK Advani, Mr MM Joshi and Ms Uma Bharati are to be tried for a criminal conspiracy for that. Even today’s gau rakshak squads are organisational units, and their activities, even though they are made to appear as spontaneous responses, are well calibrated and designed. Haven’t BJP members just been arrested in Jharkhand for what was supposed to be an impromptu attack and murder of a Muslim in that state?

Indeed, can anyone remember a single incident of Hindu mobs rioting on their own in recent years anywhere in India in response to a hurt to their Hindu religious feelings? No, because there haven’t been. The spontaneous Hindu mobilisation has always been along caste lines — Jat, Patel, Yadav — for specific caste-related grievances, ranging from protesting state repression to demanding reservations.

Sadly, the liberal classes are behaving weakly in succumbing to a false binary pushed down their throats by the Hindutva bigots. Yes, violence is wrong. But to say that the violence by marginalised Muslims who are so backward and uneducated that they don’t know any better is as wrong as the crafted violence of the globalised, cultist RSS brigade is nonsense. It is also not true.

Also read: BJP and Hindutva outfits are ruining my country for me