Even by enforcing a regressive Hinduism, RSS can't change India

Our diversity has not altered for centuries and no government can alter it.

Not a day passes when we do not read or hear about how secularism and individual freedom is under threat in Modi's India. This is partly because of the fact that there has been not a mere change in regime but also an ideological shift from the Left of centre to the Right of centre. This paradigm shift has obviously upset the applecart of thinkers and intellectuals long used to riding the leftist liberal gravy train.

Part of the blame also lies with the rise of the Right extremists who thought that with BJP government in power, they have a free run to promote their Hindutva agenda. Modi's rising popularity and BJP's repeated winning at the hustings has caused further panic among not only the Opposition but also the entire liberal brigade. How can a fundamentalist interloper snatch away their mantle and try and install his own ideologues in positions of influence. For years Left intellectual thinkers, activists and historians have shaped India's intellectual debate and the change of guard and the consequent displacement of an established cultural elite are seen tantamount to a crisis of epic proportions.

How can a BJP sympathiser protect India's composite culture and heritage without victimising minorities or compromising individual freedom? The lack of rightist thinkers of stature means that intellectual debate is heavily skewed against the government.

Constant alarmist statements about fascism, Nazism and Hindu Rashtra are bandied about online and in some anti-BJP traditional media as well. What most people forget is in the 21st century totalitarian regimes cannot survive for long and Narendra Modi too knows this and will not do anything that dampens his political future.

However, some fears are legitimate given that despite the PM's repeated calls, the fringe elements of the extended Sangh Parivar have been indulging in lynching, arson and persecution of the minorities, often making provocative statements. 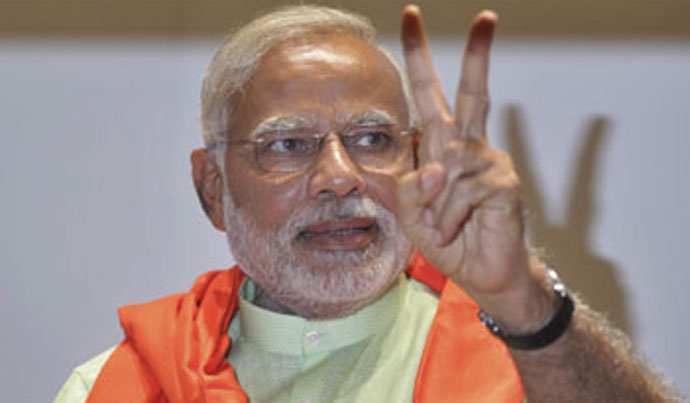 The lack of rightist thinkers of stature means that intellectual debate is heavily skewed against the government. Modi knows this well. Photo: PTI

Unfortunately, these lumpen figures have no understanding either of the inclusiveness of Hinduism of which they claim to be protectors or of India's pluralistic tradition of 5,000 years.

These actions have been and must be condemned by the prime minister and other senior functionaries of the ruling party. The BJP rank and file has to realise the Centre is not a North Indian Hindu upper caste party but an elected government of the world's largest democracy.

India's plurality goes back millennia unlike modern secularism, which is a Leftist European concept of the 20th century. Mahatma Gandhi often talked about India's plurality and coexistence of different faiths but seldom about secularism.

"I believe in the fundamental truth of all great religions of the world. I believe they are all God-given and I believe they were necessary for the people to whom these religions were revealed," he once said.

Modi understands that this holds true even today and has often talked about tolerance (like in his Mann ki Baat of August 30).

The very construct of India is layered with diversity of several centuries, which is still the case.

Why is then the civil society constantly harping about semiotics and symbolism indulged by a small number of overzealous Hindus?

BJP supporters too must remember Hinduism has remained the dominant faith of 80 per cent of the population since the Vedic times in spite of many invasions. A nation's identity goes beyond totemic symbols. RSS is committing a grave blunder by enforcing a regressive Hinduism of vegetarianism and attire and language. India, even a Hindu one, cannot homogenise ethnicities of 800 million Hindus in broad cultural strokes.

A Hindu in Kerala and a Hindu in Kashmir have their respective, distinct identities as do a Saraswat Brahman and a Punjabi Khatri and so on. Gandhi was a deeply spiritual person in the truest Hindu tradition, yet his vision was wide enough.

Atal Bihari Vajpayee espoused this spirit. This is also how I see Narendra Modi in the years to come. India's diversity has not altered for centuries and no government can alter it.

The Left liberals must stop crying wolf about some imaginary loss of freedom when hundreds of them continue to spew venom on the social media with as much ferocity as fundamentalists.

Yes, the ruling party will replace some people who form the cultural elite with its own favourites. There may be a change in some iconography. This happens in any democracy when the political ideology changes.

#Modi government, #Hindutva
The views and opinions expressed in this article are those of the authors and do not necessarily reflect the official policy or position of DailyO.in or the India Today Group. The writers are solely responsible for any claims arising out of the contents of this article.