Homosexuality was accepted by Hindu gods. So what is your problem?

Our traditions entrench the belief that anything that gives pleasure to the body is lousy and lustful and should be treated as a crime.

The debate over Section 377 has thrown up many crucial questions before us. Do gods have anything to do with our sexual orientation? Does the human urge to find sexual pleasure disturb the "order of nature"? Is there any link between human pleasure and religion?

The need to understand the real meaning of life draws us to faith and devotional activities. Interestingly, the same need prompts us to seek pleasure in life.

So why are the two things seen in contrast then?

Hindu mythology is full of stories of deities changing gender to appeal to the other sex. There are also tales of devtas taking androgynous forms at different points for one reason or the other. Lord Vishnu becoming Mohini and Lord Shiva Ardhnarishvar are among some of the examples. However, each such incident in mythology has had one "morally correct" explanation or the other. Hindu mythology has several stories where sexual acts have been performed purely for a sacred purpose or have been ironically non-sensual. 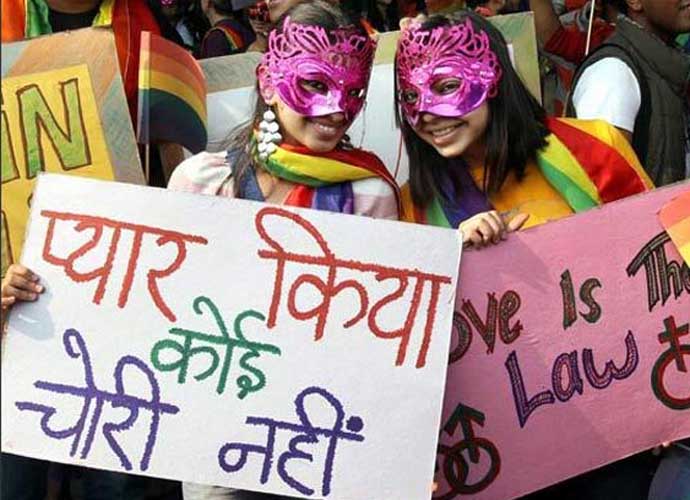 While people of all religious hues have spoken against allowing gay sex, they have never clarified if sacred texts disallow loving people from the opposite gender.

The British law making homosexuality a criminal offence is as archaic and unjustified as apartheid. In keeping with the tradition, the Indian society follows a trend which makes social norms against certain acts that are deemed immoral as law. This entrenches the belief that anything that gives pleasure to the body is lousy and lustful and should be treated as a crime. This allows the moral police to deem it fit to regulate people's personal choices. This brigade of moral police draws its legitimacy from the half-baked understanding of religion.

Instances of homosexuality and eunuchs find mention in Hindu mythology. However, they were seen as outcastes and these myths took the form of norms and traditions.

From Shikhandi to Shiva, many instances highlight gender blending and the significance of it. Kamdeva shoots arrows to arouse love in people and Kamasutra teaches sex poses. Ramayana says that when Hanuman entered Lanka to rescue Sita, he saw female demons locked in passionate kisses. Lord Ayyappa is believed to be the son of Shiva and Mohini - the female avatar of Vishnu.

It is therefore important that personal choices are given recognition in the land of social ethos.

Manusmriti, however, clearly spells out punishment for homosexual women. Lesbian sex between girls had a fine of 200 pennies, but for mature women the punishment included tonsuring and chopping of fingers. Men involved in gay sex could, however, get away with a lighter punishment such as avowing to not repeat the offence.

Despite examples of homosexuality in ancient India, people have continued to see it as moral corruption.

Hope came in 2009 when the Delhi High Court ruled that gay sex was not a crime. But in 2013, the Supreme Court overturned that decision.

In 2018, there is hope again. The Supreme Court has set a constitutional bench to look into the law criminalising gay sex, saying, "societal morality changes with time".

Both society and religion change with time. They are shaped by the political and economical changes around us. The same is happening with the legalising homosexuality. Hope the debate around it is centered around being a discussion on personal choices.

#Lord Ayyappa, #Mythology, #Section 377, #Homosexuality
The views and opinions expressed in this article are those of the authors and do not necessarily reflect the official policy or position of DailyO.in or the India Today Group. The writers are solely responsible for any claims arising out of the contents of this article.

The author is a former TV journalist and member - International Association of Religion Journalists.