I had said that Pakistani actors working in Bollywood should condemn the attack.

The film Uri: The Surgical Strike hardly shows the brutality with which Jaish-e-Mohammad terrorists massacred our Indian soldiers sleeping in their tents.

Some of the soldiers were burnt alive, some died due to high-intensity grenade blasts, some of third-degree burns — and a few were shot in the head.

All of them were sleeping when the fatal blows were struck. 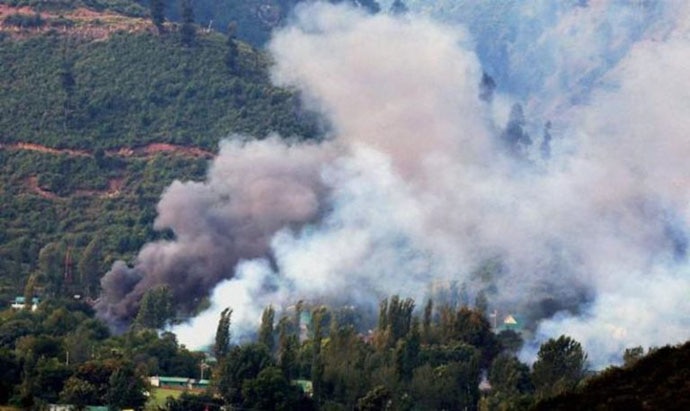 The camp was attacked in the wee hours, when our soldiers, asleep, didn't even get the chance to fight. (Photo: PTI)

Two more died later in hospital. Initial army estimates put the number of the injured at 100, even as some soldiers were maimed for life.

Even this appears like a collection of mere numbers. Let me assure you that seeing the site of the carnage was enough to make you go blind with rage.

Some photos of the dead soldiers did the rounds on WhatsApp groups — and it was enough to enrage any Indian.

All rules of engagement were broken by those terrorists, who fired at the heads of our jawans in the wee hours, their bodies being neatly tucked under their quilts.

September 18, 2016 was a day when the whole country was seething with rage at the cowardice of the Jaish terrorists.

I was no different. Eighteen soldiers were martyred in the Uri attack — many burnt alive, some shot in the head as they slept. (Photo: PTI)

As I was sitting in front of the television, watching the shocking visuals, my phone rang. It was a journalist, a former colleague, on the other side.

- “Listen, we need to do something on the Uri attack for the supplement tomorrow. Can you suggest a good idea?”

-“Instead of asking the usual people, why don’t you ask Pakistani actors what they feel about the attack? After all, India is a ‘karmabhoomi’ (the place where one earns their bread) for them. They will surely condemn the attack and it will make all of us feel better.”

- (Cutting me off) “Why will a Pakistani actor condemn the attack? Why will they speak against their own country? They have to go back there, na?”

- “But Pakistan has denied that they are involved (as usual!). No terrorist group has claimed responsibility. So you are only condemning an act of terror. After all, Indians and Pakistanis have always felt a kind of a brotherhood towards each other. Look at social media, Pakistanis are coming out in the thousands to condemn the attack.”

- “You know what, the next guy in line is Fawad Khan. He is kind of a heartthrob... Mahira is scheduled to be launched next. They are known as the golden couple on Pakistani TV....”

- “All the more reason why you should ask them. Their publicists will agree too, because their answers will endear them to the Indian audience.”

Fifteen minutes later, my former colleague got back to me, saying that her editor approved of the idea and also remarked that she knew where the idea had come from. I smiled.

Two hours later, the smile had disappeared from my face again.

I was informed that even though the Indian publicists did not have a problem, none of the Pakistanis publicists was open to the idea of a quote against the Uri attack. Realising the potential, the editor put the entire editorial team on the job, but they too returned empty-handed.

The standard line was that the actors didn’t want to speak against their own country. Reminding them that the Pakistan government had criticised the attack, and that they were poised to be launched in front of an Indian audience eager to listen to them, didn't work.

What hurt even more was when I heard that one of the Pakistani actors had cheekily commented that Karmabhoomi was a Munshi Premchand novel and had no connection with Bollywood.

I was told most of them refused to talk about the attack as it was linked to the Kashmir issue (no link had been established till that point).

In fact, one of the Pakistani actors fired at a journalist, saying that she was forgetting he was a Pakistani first and an actor later. He further stressed that he appeared in Indian shows because he earned money.

The next day, newspapers went to town with ‘reactions from celebs’  — none among them was from a Pakistani actor working in Bollywood.

After reading the morning papers on September 19, 2016, I started writing my blog. Then I felt it was too harsh. I rewrote large parts of it in the evening, then sent it for publication the next day. My blog was a reflection of what I was feeling in my heart.

The final draft of the blog turned out to be an open letter to Fawad Khan asking him to go back to Pakistan because he had refused to react on the Uri attack.

Within an hour of it getting published, the blog had 500 shares on social media, which was fairly normal for me. I went for breakfast and started getting ready for work. But the series of incidents that happened next scarred me forever. My 'open letter to Fawad Khan' opened me to severe criticism. (Photo: YouTube/screengrab)

The blog started going viral — in the next one hour, there were 1,000 shares from my Facebook status alone. I started to prepare myself mentally for what was bound to happen next — but I actually had no idea.

Facebook apparently clamped down on the link and it was no more available unless you visited my profile. But the views counter on my Wordpress website was looking like a rocket. People were sharing the blog like crazy on their WhatsApp groups.

Before I could pat myself on the back, came the backlash like a tsunami.

The first ones to criticise me were some of my own friends. They said I was unnecessarily singling out Fawad Khan. Then came people I didn’t know.

And then came the Pakistani media.

When I looked at the phone an hour later, there were about 10 calls from (+92) numbers and a couple of messages from Pakistani journalists wanting to talk to me. I told them I had nothing more to say. I said the letter should be considered an Indian’s open letter to Pakistani actors in Bollywood.

When I didn’t react, the Pakistani media attacked me.

Over the next few days, leading Pakistani papers (like The Express Tribune, Dawn) reacted against my article. I lost count of the articles written about me. Then came the letters to me from Pakistan (Example1, Example2) followed by intense TV debates on Pakistani prime time television.

I had thought Indian journalists would support me and understand where I was coming from.

Nope. That was not to be.

The Indian media was also critical of me for bringing into art a war between nations. What I understood was that a direct attack on Fawad Khan had hurt them, and I found no article in the mainstream Indian media that supported my stand.

Being a former journalist, I stood by what I had written and maintained on my social media profiles that Fawad Khan should at least say something about the ghastly attack. I argued that Bollywood movies may be art, but they were commercial art, and terrorism should be condemned by one and all irrespective of nationality.

The attacks intensified  — as did the views on my blog.

From journalists to stand-up comedians, everyone had something to say about how I was targeting Fawad Khan ‘unnecessarily’.

I could understand that I had touched a raw nerve somewhere, but couldn’t agree with the point that we should detach Fawad Khan from his nationality.

For me, he was the biggest name from the Pakistani film industry and he had a responsibility towards his Indian audience.

Days later, Khan issued a statement which, I felt, spoke about world peace. It neither condemned terrorism, nor the Uri attack. Then, of course, came the bold statement of Mahira Khan, who directly mentioned terrorism and said it needed to be condemned, no matter on which soil it had been perpetrated.

As they say, the media is always seeking to support public opinion. And the public opinion was against terror and against Fawad Khan for not condemning a terror attack.

But the scars in my mind remained.

A few months later though, I realised that my open letter had also impacted in some way the dynamics of Bollywood-Pakistan relations. What perhaps didn't change was the deep divide among journalists on whether Fawad Khan should have condemned the Uri attack.

For your information, till date, Fawad Khan hasn’t condemned terrorism.

Also read: Sonu Nigam says Pakistani singers get paid more in India than Indians do. This is discrimination. Why are liberals silent?