I am a survivor of the trade in human beings. To combat trafficking, we need legislation centred on its victims now

Both a survivor and an activist discuss why the existing anti-human trafficking laws, the ITPA and IPC regulations, are not victim-centric, and lead to further atrocities against survivors.

There is a saying that goes — 'All it takes for evil to triumph is for a good man to do nothing'.

I have seen a lot of this evil growing up — always longing for the light, for the good. People told me it would be hard and I would perhaps never find it. But eventually, I did.

Through this article, my only aim is to share my story with other survivors to have hope and provide motivation to the 'good' to speak up and end their silence.

As a young girl living in Amravati, losing my parents at the age of five created several obstacles for me. But I received immense support from my grandmother who raised me and encouraged me to go to school and pursue all my dreams.

However, it only takes a second for your life to change.

While we were on a holiday visit to my uncle in the outskirts of Amravati, I was kidnapped from the streets — pulled into a car, drugged and tied up. When I awoke two days later, I found myself in completely different surroundings. I was later told that I was in a small town in Madhya Pradesh. Every day I was locked up in a room, denied food and beaten black and blue for resisting the advances being made. I could hear a lot of bargaining, discussions about money, negotiations on 'rates' through the door. 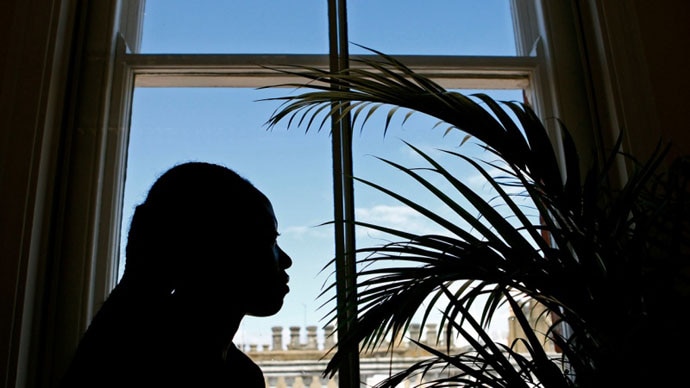 After being trafficked and sexually tortured for years before being rescued, a survivor says she feels lucky when she reads about other trafficking cases. (Photo: Reuters)

One day, I was sold off to one of the visitors for Rs 75,000 — paid in cash in front of me. I looked at the man who bought me and thought perhaps he was my 'good man' and he had rescued and saved my life from the abuse I was facing. Maybe he would be the one to keep me safe.

But the reality was that I was just a toy — one that was to be used and abused.

This was just the beginning of what would be years of physical and sexual abuse — not only by the man who called himself my 'husband', but by his friends, his family and other strangers who could offer him a good price for me.

At times, I would wonder if my life had any value. Was there anyone who was looking for me or worried about me?

I contemplated suicide many times. I would have gone through it, had it not been for the voice of my old grandmother in my head. Her encouragement from the past — to achieve my dreams and be more than what I can be — gave me strength.

One day, I found the courage to climb out of a window in the middle of the day. I ran to the nearest police station.

It was at the Khategaon police station that I realised — for the first time — what had happened to me.

A case of human trafficking was registered and the police were forced to investigate further owing to the nature of the complaint. In the interim, I was lucky to be sent to an NGO for rescued girls, which gave me shelter and food and made sure I was sent back to my grandmother in Amravati.

Today, I work in Mumbai with a catering company, and I also support the organisation that saved my life. I realise how lucky I was when I read about other trafficking cases — some much graver than mine.

Firstly, I was fortunate that my case was registered as that of human trafficking — and not domestic violence. It was very much possible because my captor had posed as my 'husband'.

Secondly, the organisation that was responsible for my rehabilitation ensured speedy justice in my case.

I know not every girl is able to free herself from her abusers easily.

There are long-pending cases, no safe environment for survivors, cases registered using wrong sections and many other gaps. In my view, these shortcomings are a result of large gaps in the drafting and implementation of the laws. It is critical that we have a victim-centric law which can empower victims of this organised crime and save them from the dark world of human trade. With present laws not being victim-centric, there is little hope for survivors — even after they are rescued from their captors. (Photo: Reuters)

Today, if we look at the existing provisions for survivors — like the Immoral Traffic (Prevention) Act, 1986 (ITPA), The Bonded Labour Act, 1976 and the Indian Penal Code (IPC),1860 — there are glaring gaps, especially when it comes to victims and their rehabilitation.

The current systems of rehabilitation all depend on institutional care and economic empowerment programmes. Once the survivor goes back home — to her own community and family — there is little scope for supporting her reintegration. Survivors find it difficult to establish themselves due to widespread stigma, the lack of employment and business opportunities. Added to this are the physical and mental health issues they have to deal with as a consequence of the exploitation they were subjected to.

Secondly, having observed a yawning gap in the protection protocol of the victim and witness, the victims, in most cases, are unable to testify against their traffickers — leading to prolonged court trials and hardly any prosecution of culprits.

In addition, there is no uniform and structural provision for compensation to victims, and is submitted only post-the trial's conclusion. From a victim or survivor's point of view, these gaps are critical.

A ray of hope in the new legislation

I feel that the Trafficking of Persons (Prevention, Protection and Rehabilitation) Bill, 2018 was drafted in consultation with various groups of survivors from different kinds of trafficking — including sexual exploitation, bonded labour, forced begging, forced marriage, organ trade, etc. They raised important concerns with the policy makers, and I am happy that the Bill addresses these concerns and gaps in the existing legislation and provides additional provisions to tackle trafficking comprehensively. Heed their cries: The Rajya Sabha should pass the Trafficking of Persons (Prevention, Protection and Rehabilitation) Bill, 2018. (Photo: Reuters)

Many victims have suffered for a long time in receiving rehabilitation funds because the court proceedings were not completed. This provision will ensure that the victims receive the necessary support to start a new and better life as soon as they are rescued.

All these steps are critical to ensuring that the survivors are the central beneficiary of this Bill. Many (including myself) who support victims through their personal trajectories of overcoming fear and regaining self-worth will agree to the provisions of the Bill, and its significance in bringing justice.

It is essential for the Rajya Sabha to pass the Trafficking of Persons (Prevention, Protection and Rehabilitation) Bill and initiate the process of placing an implementation mechanism for the Law to be enacted.

Post your comment
#Bonded Labour, #Forced begging, #Sexual exploitation, #Human Trafficking
The views and opinions expressed in this article are those of the authors and do not necessarily reflect the official policy or position of DailyO.in or the India Today Group. The writers are solely responsible for any claims arising out of the contents of this article.

Prerna (name changed) was sold at the age of 15 years and captivated as a wife for four years. She was saved from a life sexual tortures for year with immense support from the police in Khategaon. Pompi Banerjee is a psychologist and a human rights activist, who has been working with survivors of human trafficking — supporting them to participate in law and policy reforms.