Humans of Hindutva blocked on Facebook: Admin writes a letter

Update: Humans of Hindutva posted this letter and asked Facebook to take a stand. Instead they got blocked for another three days.

As the admin of Humans of Hindutva, a parody page that takes potshots at some of the fundamentalists hiding in plain sight within India's right-wing, I would like to bring to your attention a problem that you surely must be aware of. I'm referring to the abuse of your Report Abuse button by the Indian troll army to block any dissent or criticism. I have had two of my posts removed when they were well within your Community Standards and am blocked from posting for 24 hours.

I request you to consider how people like me are outnumbered and find ourselves playing an unfair and rigged game.

The post that got me blocked was a dig at Indian Army chief General Bipin Rawat's controversial comment which insinuated that he'd rather have Kashmiri protesters use weapons than stones so that he could take the necessary action, that is, shoot them down. I found this call to arms in poor taste, since it was coming from India's army chief. To satirise this I used the same quote, with some flourishes, and posted it along with a photo of General Dyer to drive home the message that even the British general had perhaps waited for Indians to break his martial law so that he could unleash the hell he did at Jallianwallah Bagh. Is my dig at General Rawat's statement any more objectionable than his original statement?

In another post, which was also removed, I tried to argue that Muslims condemned the attack in Manchester and perhaps the blame doesn't lie squarely with Islam but with fundamentalist agents playing pawns in a complex game of geopolitical chess. By no means was I defending terrorists or their actions but only trying to show that it's easy to radicalise someone when you bomb his country and his family to kingdom come. I was trying to criticise the right-wing for using the unfortunate events such as the Manchester bombing to paint all Muslims as terrorists. Is this really such a perverse logic that it had to be removed? After this post was removed, you have also restricted the reach of my page. I was gaining a thousand followers a day and overnight the number fell to a hundred. All because I tried to reason that an entire community shouldn't be blamed for the actions of a few bad apples.

Like Art Buchwald, I don't think that we can make up anything anymore because the world itself has become a satire. All I'm doing is recording it. My intention is not to provoke but to simply start a dialogue and hold a mirror to the nationalists and fundamentalists through a parody of their often sociopathic beliefs. For far too long I've had to read between the lines, all I'm doing now is writing between them.

Recently Abhijeet, the part-time singer and full-time misogynist, had his Twitter account suspended because he made cheap remarks online. My posts, on the other hand, call out Indians on their sexism, racism and casteism. You would be hard-pressed to find anything on it that is as offensive as most right-wing pages. 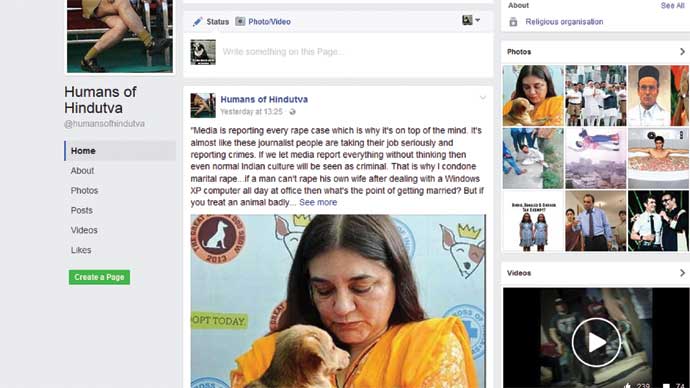 Just a parody. A mere attempt at satire.

Something that I can't repeat enough to the angry commenters on my page (and which I should expressly state to you as well) is that it ridicules Hindutva not Hindus. It is against those who use Hinduism for their nefarious purposes. I am a Hindu myself (by birth; I became an atheist somewhere between A Brief History of Time and Catch-22) and find it to be a peaceful and tolerant religion when it is not hijacked by lunatics. I could say the same about all the other religions in India like Christianity, Islam or Salman.

Regarding hate speech, your community standards state, 'People can use Facebook to challenge ideas, institutions and practices. Such discussion can promote debate and greater understanding. Sometimes people share content containing someone else's hate speech for the purpose of raising awareness or educating others about that hate speech. When this is the case, we expect people to clearly indicate their purpose, which helps us better understand why they shared that content. We allow humour, satire or social commentary related to these topics.'

It should be obvious that my page is an attempt at satire. Your company is surely not aloof from the chaos breaking out on the streets of India where couples and minorities are being lynched by entitled mobs. In the digital sphere, the lynching is undertaken by entitled trolls. If an obvious joke about fundamentalism (which is made to lampoon the reasons people give for supporting it) bothers people more than the increasing number of attacks on their fellow citizens, then they need to set their priorities straight.

The problem is that average, unaffiliated Facebook users like me are now against a dedicated collective that wants to muzzle our voices by employing the tools that you had incorporated in order to check abuse. Bizarrely, the abusers are feigning offence and abuse to get any content blocked that is a threat to their world view. These people are on a payroll and their political ties cannot be disputed.

Your guidelines state that 'we rely on our community to report this content to us' but what if some in this community had ulterior motives to take down content? There are far more objectionable pages live on your platform right now. There are right-wing pages and fake videos spewing racist bile in an attempt to damage the secular fabric of this nation. You have all of my data, I have not once reported a photo/comment/page in the last 10 years of using Facebook because I believe in free speech...almost to a fault. However, I've had to block some people and delete their comments from my page when they abused and threatened me or when they use racial epithets or crude language.

I understand your stand on free speech has to be a nuanced one because too much of it could lead to hate speech and too little is akin to a vacuum. However, I hope you consider that satire, as Molly Ivins once said, is traditionally the weapon of the powerless against the powerful. Surely, when you observe that the powerful are trying to crush dissent and criticism, you should have some solution to protect the rights of users like me from those who are abusing a loophole in your system?

If Facebook is a community, like it purports to be, then there has to be some elbow room in it for opinions that go against the flow. I am neither a politician nor a digital terrorist. I have no ulterior motive but to engage with a niche audience of like-minded people using whatever humour I can muster.

I'm a man of simple pleasures: a beer after work, a movie with my wife, a book before bed, a silly post on Facebook when I find the time.

I'm hardly an enemy of the state. Hence, I request you to consider how people like me are outnumbered and find ourselves playing an unfair and rigged game. A couple more of these mass reporting instances could see my account suspended which would be a shame because I completely adhere to your community standards.

If someone from your team wishes to interact with me regarding this issue, please feel free to reach out to me. You, of all people, know where to find me.