Be truly free - Break bonds of history, ties of sentiment

India wriggles miserably between confusions over the West and hazy sentiment about its own past. In the process, it's losing its grip on both. Independence Day should liberate us from this sorry scene.

For well over a hundred years, we, in India, have been wringing our wrists over the question of what is ours, and what came from outside. In 1916, at the inauguration of the Banaras Hindu University, an institution founded with the express purpose of assimilating the new learning out of the West, a relatively unknown Indian leader, freshly returned from his activities in South Africa, caused a ‘beautiful scandal.’ 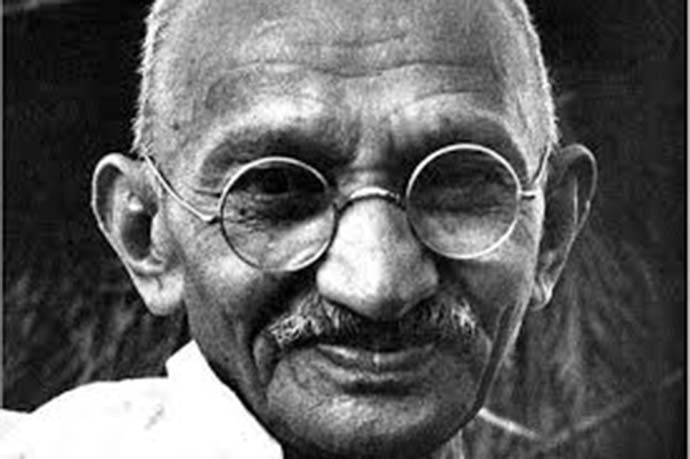 The Mahatma even caused 'a beautiful scandal' when speaking of India once.

“It is a matter of deep humiliation and shame for us,” began Mohandas Karamchand Gandhi, “that I am compelled this evening under the shadow of this great college, and in this sacred city, to address my countrymen in a language that is foreign to me.”

Speaking to an audience comprising the viceroy, a pride of Indian princes, and Annie Besant in the chair, Gandhi continued, “Suppose that we had been receiving education during the past fifty years through our vernaculars, what should we be today? We should have today a free India, we should have our educated men not as if they were foreigners in their own land, but speaking to the heart of the nation . . .”

That same year – 1916 — the great Sri Lankan art historian AK Coomaraswamy published a short book called Message of the East, in which he distinguished between political and cultural freedom. An India that was politically free, he wrote, but “subdued by Europe in her inmost soul” was not worth fighting for, let alone dying for.

Gandhi and Coomaraswamy were responding to a country whose contact with the West had turned corrosive — nothing like the assimilative experiences India had known in the past, but something with the character of a scorched earth policy. The “nerve gas” of contact with the West was something Japan had experienced too. Arthur Koestler, in The Lotus and the Robot, writes of how Japan, which had successfully assimilated Indian yoga, Chinese philosophy and art, Mongolian cooking – “they transformed and adapted to their special needs and tastes, until only a remote resemblance to the original remained” – found itself unable to assimilate the West. “Western science and technology acted as a Trojan Horse; out of its belly poured alien philosophies, fashions, political concepts, attitudes to life.” These did not blend with the traditional culture. “Japan absorbed Western science and technology like a sponge; but Western culture and the Western way of life were like skin-grafts from an alien donor which, though eagerly accepted, never took.”

The problem is one of autonomy. Society is in the throes of a great change, but the spirit of change has not arisen organically - it is the direct product of contact with another civilization, namely Europe’s. How then does one give autonomy to what began as an alien critique of one’s culture?

It is an anxiety that runs right through the work of Dostoevsky. Evgeny Radomsky’s “extraordinary fact” in The Idiot is that Russian liberalism is not a critique of Russia’s social and economic structures, but an assault on Russia itself. “There cannot be such a liberal anywhere else who would hate his very fatherland,” says Radomsky. His explanation for why such a man -- the likes of which has “not existed or occurred anywhere at any time since the world began, not among any single people” – should appear in Russia, is simple: he is not yet Russian at all, but the living, breathing embodiment of the West’s critique of Russia. Whither within, wondered Rabindranath Tagore, who wrote of change transforming Gora, his famous protagonist.

The eponymous hero of Tagore’s wonderful novel, Gora, also believes that though Hindu society may have its flaws, change must come from within. An imperfect but intact India is infinitely preferable, he feels, to India remade in the image of the West, and robbed of an internal life. “The cause of rot might be air,” Gora says, “but so long as we are alive we survive; if we die, we rot...”

A brief look at our culture wars will tell you that a hundred years on, we are no closer – quite possibly further – from putting to bed these anxieties.

It is a miserable position to be in.

The appeal of the West grows by leaps and bounds even as the “real” India, India free of the gaze of others, grows everyday more remote. To that world of images and technologies pouring out of the West, we say we are proud to be Indian. They have the cities we want to live in, with their thrilling diversity, the fashions we want to imitate, the technologies we crave, the colleges we want to go to, the televisions shows we want to watch — they have a whole world of sexual and social freedoms, we have our pride. They have craft cocktails, flat whites and gluten-free pasta, we have that old Bharat Mata.

In our heart of hearts, we know we cannot answer the appeal of another culture by a simple assertion of self.

We can all hear the strangled note of desperation in our cries of “Bharat Mata ki Jai.” The louder we say it, the more we suspect no victory is at hand.

The truth is that we have no vision of the world as attractive as that which has emerged in parts of the coastal United States, the cities of Western Europe and now East Asia. Just as there is no red American city or state where anyone actually wants to live, or even visit – no Brexiteer’s paradise to answer the appeal of London – there is no authentic Indian reality that anyone buys into, least of all those who live there. 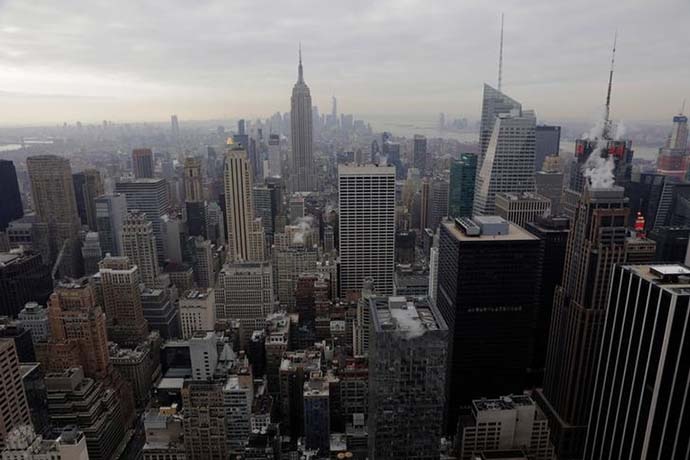 Living the high life: Who doesn't want to be in New York, New York! (Photo: Reuters)

The power of that liberal world order is not political, but cultural: it has wrought a way of life that everyone wants. Aldous Huxley, travelling through Asia in the 1920s for Jesting Pilate, had felt that everywhere he went, all countries seemed to have a “real” self, which no stranger could hope to see, and yet, it was not this real self that was, to use Huxley’s words, “projecting itself on history.” He wrote, “the future of Japan, as of every other country, depends on its “unreal” self. Which is to say that it is not the rural idyll of life in India’s villages that will determine our future, but the shoddy hybrid that arises from India seeking, however brokenly, to digest Western-style modernity.

In Benares, overlooking a garden where evening is falling, the former head of Sanskrit at BHU is at his wits' end. Kamlesh Dutt Tripathi, a grand old Brahmin dressed in a blue woolen kurta and waistcoat, a white scarf around his neck, says, “Sometimes, I think that this fight that we are engaged in is one in which we are just going to keep losing.” He means the fight to strengthen one’s own culture. “Maybe Heidegger was right,” he says, citing the work of the Heidegger expert, JL Mehta, “Maybe the destiny of the world does lie in complete Westernization. Let us become completely Westernized. Only then will we come back.”

Feeling the heat: Even BHU, founded to assimilate new learning, feels the confusion around it. (Photo: BHU website)

Tripathi is alluding to something we all feel: the problem is not the West, but rather, what happens to the West when it is translated into Indian terms. Something about our condition, on the one hand, piously defending our culture, on the other, gravitating toward the easy appeal of the other culture, has led us into a toxic relationship with both societies. 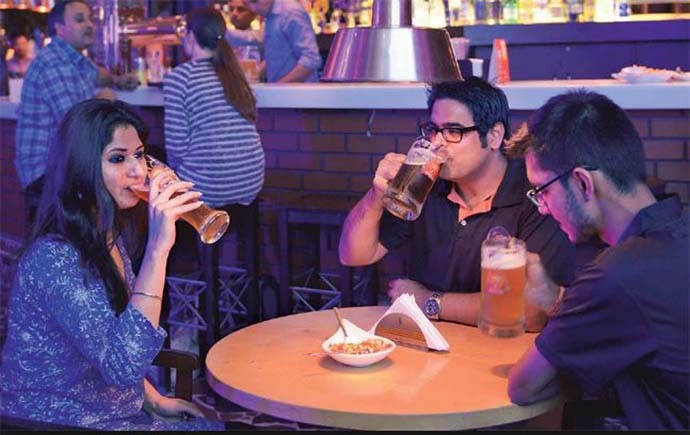 Being 'Western' with every sip: The apparent appeal of the West grows by leaps and bounds. (Photo: India Today)

We fail ourselves, even as we reduce the West to license and materialism.

“But to all the finer forces in Western civilization,” Coomaraswamy had written in 1916, “leading to the ultimate evolution of an ideal life, India has remained largely blind. She has treated the concrete and material achievements as an end in itself, and endeavored rather to imitate results than to assimilate methods.”

Independence Day is a day to celebrate one’s loyalties.

“Indian: let that be your religion,” says a sign on the ghat in Benares. This Independence Day, I ask you to do the opposite: eschew your loyalties. Break an idol, burn a sacred text, view your family as your enemy. If you love Bharat Mata, treat her like Joyce did Ireland: “the old sow that eats her farrow.” Do whatever you must to achieve a state of internal detachment from your country and society. We have suffered too long on account of our loyalties. We have each known a version of the “spiritual loneliness” that comes to those who are “out of place everywhere, at home nowhere.”

We have all, in our way, experienced what the French writer Didier Eribon describes as “the discomfort that results from belonging to two different worlds, worlds so far separated from each other that they seem irreconcilable, and yet which coexist in everything that you are.”

We have wasted tremendous energy in making journeys of return. It cannot be done, nor is it desirable.

The break that occurred in the eighteenth and nineteenth centuries all over the old non-West is not incidental; it is part of who we are.

This Independence Day, let’s be done with the demands of belonging. Set aside pride. Think only of self-improvement, taking what was written on the portal of the classical world everywhere as our creed: ātmānam viddhi. Know thyself and be free.

#Knowledge, #Freedom, #India at 71, #Independence day 2018
The views and opinions expressed in this article are those of the authors and do not necessarily reflect the official policy or position of DailyO.in or the India Today Group. The writers are solely responsible for any claims arising out of the contents of this article.

Aatish Taseer is a contributing writer for The International New York Times; his book, The Twice-Born (HarperCollins India), is forthcoming in November.