When Narendra Modi visited Nepal in 2014 it was the first state visit of an Indian prime minister in almost 17 years. New Delhi, it seemed then, had suddenly remembered a long-lost friend.

Mesmerised by his speech, delivered at Nepal’s constituent assembly, the Nepali people and their leaders saw hope for a renewed India-Nepal relationship, but it remained just that, a hope. Things turned ugly when India chose to allow the “unofficial blockade” of Nepal which paralysed the Himalayan country.

This time it was Prime Minister Modi’s third visit to Nepal after assuming office in 2014. This visit came just a month after Nepali Prime Minister KP Oli’s visit to New Delhi. The two leaders and the two nations seem to be in a love-hate relationship further exacerbated by India’s “helicopter parenting approach” towards its next door neighbour. Both countries share a feeling of “can’t live with you, can’t live without you” clearly resonating in the words of the former Indian prime minister Atal Bihari Vajpayee when he said, “You can change your friend but not your neighbours.” 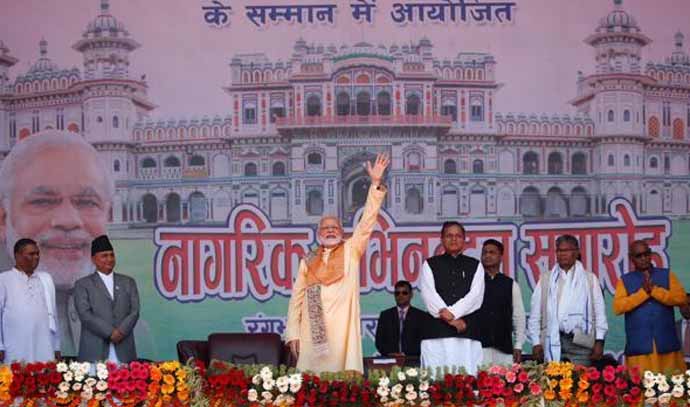 Though PM Modi received a warm official welcome this time too, the anger and disappointment that still lingers in the minds of the Nepali people manifested itself over the internet. People couldn’t stop themselves from expressing their fury and social media was flooded with hashtags like #BlockadeWasCrimeMrModi and #ModiNotWelcomedInNepal.

PM Modi’s speech in 2018 was mainly targeted at cementing fractured ties and emphasising the similarities between the two nations on the ground of religion and culture as well as articulately linking the two nations with mythology. He even read out a verse from the Ramcharitmanas, which says “one cannot remain isolated from the suffering of a friend and a true friend always helps his friend in the time of suffering”.

But then action speaks louder than words and one cannot forget that New Delhi chose to remain quiet and indifferent to the sufferings of its “friend” next door. In fact, this visit was a desperate attempt to keep at least one of its neighbours happy. Or perhaps, PM Modi realised that a renewed and successful neighbourhood policy would act as a face-saver for the upcoming 2019 general elections. Whatever the reason, the visit, or the so-called “surprise gifts” for Nepal, will definitely not act as a balm for the pain Nepali people had to go through in 2015. In 2015, when the country was still reeling from the aftermath of a devastating earthquake that took more than 9,000 lives, months of transport blockade at the Indian border effectively cut off vital supplies, including petroleum products, to Nepal and crippled the nation.

With shortage of fuel, medicines and essential supplies, the country faced a humanitarian crisis. Prices of food and supplies skyrocketed and people had to pay up to 3,000 Nepali rupees (NPR) for a cylinder of cooking gas and NPR 100 for a packet of salt. The rift between New Delhi and Kathmandu widened as businesses suffered, lives were lost and the economy tanked.

The blockade was seen as the fallout of India's unhappiness with Nepal’s new constitution which was passed with a 90 per cent approval by its Constituent Assembly. India wanted some changes to be made to the Constitution which Nepal naturally brushed aside as interference in domestic affairs. It was clear to everyone that India wanted to intervene in Nepal’s internal affairs to show solidarity with the Madhesis of Nepal. India officially denied any such allegation terming the blockade an unofficial one imposed by private transporters and was a result of internal unrest in Nepal.

When New Delhi did nothing to overtly end the blockade many in Nepal firmly believed that India covertly imposed it to teach Kathmandu a lesson, to never ignore what the big brother was saying. This distrust on the part of the Nepali and muscle-flexing by India strained the relationship to its breaking.

The 1,751km porous border that India and Nepal have traditionally shared should not become a line that divides. It is a line that despite its existence on a map has not mattered on the ground as ties matured and millions of dreams took shape as populations moved freely across it from both sides.

In New Delhi, the current leadership should realise that the kindred bonds that bind India and Nepal together should not be sacrificed for the sake of politics.

The unfolding of the neighbourhood first policy or Narendra Modi visiting Nepal as a Santa with a bag full of goodies will not rebuild the trust and friendship that has been severely dented. Neither will a call from PM Modi nor a warm welcome from PM Oli strengthen the already strained bilateral relationship between the two countries.

What can help, however, is action on the ground from Modi — the Nepali people at the moment are a little short on belief when it comes to mere promises — they want delivery.

It is high time India walks that extra mile to prove its loyalty in friendship.