Kashmir is still bleeding after Burhan Wani: New Delhi must correct its wrongs

There is an obvious ambivalence between the policies of the Centre and the state.

As we mark one year of the killing of dreaded militant and former Hizbul Mujahideen commander Burhan Wani by our armed forces, it becomes imperative to assess the ground situation in Kashmir. However, before we do that, there is ample reason why July 8 carries significance for both the government and the youth who consider the path of terror an alternative.

For the youth, the day should serve as a warning that terror and terrorism have only one fate — death. For the government, this day should serve as a reality check that Kashmir is slipping from our hands due to the ill-conceived and confused policies of the unholy alliance of the PDP and BJP.

The ground situation in Kashmir remains precarious. The situation in the Valley has been tense ever since the PDP-BJP alliance assumed office in Srinagar on March 1, 2015. Despite the counter infiltration measures taken by the Army, there is no sign of improvement on the ground. The state of Jammu and Kashmir is probably going through the worst phase in its history.

Pakistan’s hand in fermenting troubles in the state is an open secret, but the strategy to contain violence has to emerge from within the Indian government. 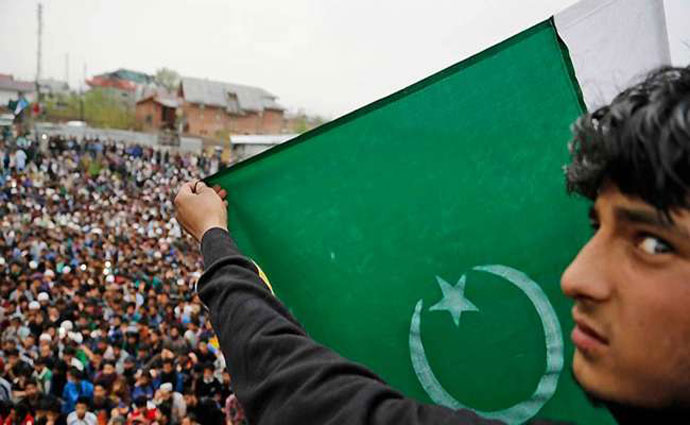 The massive unemployment of youth in the state has been a contributory factor in the growth of militancy in the Valley. Photo: PTI

Pakistan is not going to change its approach — that onus lies with the political leadership in Delhi and Srinagar. The 7 per cent turnout in the Srinagar by-election signalled the loss of confidence of the people in the Valley in the authority of the state government.

The weakening of state legitimacy is not conducive for a democratic structure. Therefore, both Prime Minister Narendra Modi and Jammu and Kashmir CM Mehbooba Mufti must ensure that the moral authority of the state is not allowed to be weakened.

The central government and the PDP-BJP government in Srinagar would have to work on the principle of joint responsibility.

They should take political and economic initiatives to address the alienation of a large number of Kashmiris. The home minister said that a permanent solution will be found for the Kashmir problem. That shows intent, but where is the strategy?

The solution he is looking for and how the government intends to approach that solution is not clear. When large-scale violence had erupted in the Valley after the death of Burhan Wani, the prime minister had called for “a permanent and lasting solution to the problem within the framework of the Indian Constitution”.

He also spoke about the need to engage all the stakeholders, especially the youth, in a dialogue with love and affection for a long term solution to Kashmir's problems. But nothing happened on the ground.

The deteriorating situation in the Kashmir Valley is because of the absence of a well-crafted political outreach programme for the people of Jammu and Kashmir, particularly its youth. But, instead of addressing the problem with a pragmatic solution, the government is resorting to reactionary measures like banning the internet, a move which has historically failed.

It needs to be understood that the problem lies not in the hand which holds a smartphone but the one which holds the stone. So far, Modi has failed to address the anxieties of ordinary Kashmiris. Kashmir should ot be viewed as a geographical or real estate problem.

Any strategy for peace in the Valley that ignores the sensitivities and concerns of Kashmiris will not deliver results. We cannot have the same approach towards Pakistan and Kashmir. Similarly, we should not have the same strategy to deal with the separatists and the ordinary Kashmiris. Unfortunately, there is no such thing like a coherent Kashmir policy for the government of the day.

The massive unemployment of youth in the state has been a contributing factor in the growth of militancy in the Valley.

It is a major cause of alienation of the youth. The existing skill development programmes of the Modi government have failed in the state. Both the central and the state governments should devise an integrated strategy for the creation of adequate and suitable job opportunities for the Valley’s youth.

This will integrate the youth of the state with the mainstream.

The provocative rhetoric of the leaders in the government as well as the ruling parties belies the hope of the Kashmiris that peace will return to the Valley in the near future. After the statement of industries minister Chander Prakash Ganga that stone-pelters need to be beaten up and even shot at, when a VHP leader said, “AK 47 is the perfect substitute to pellet guns”, it was not even condemned by the government or the ruling party. This erodes the confidence of the people in the state authorities. It shows the disconnect from ground realities. Kashmiris too also disturbed by the incidents of minority bashing in the name of love jihad and cow protection.

In such a milieu, there is a pressing need to address the collective conscience of the people of Jammu and Kashmir.

The inherent contradictions within the state and central governments are not helping the situation either. On the one hand, every day, the central government tries to cover up its failures by parroting the word “nationalism“ and on the other, J&K deputy CM Nirmal Singh termed the killing of Burhan Wani an “accident”.

On the one hand, the central leadership takes pride in killing the militant and, on the other, the state government awards compensation to his family for the killing of his elder brother.

There must be clarity of vision to deal with the present situation in Jammu and Kashmir and a sync between the policies of the state government and the central government; regrettably, there is an obvious ambivalence between the two.

#Modi government, #Jammu and Kashmir, #Burhan Wani
The views and opinions expressed in this article are those of the authors and do not necessarily reflect the official policy or position of DailyO.in or the India Today Group. The writers are solely responsible for any claims arising out of the contents of this article.