The truth is quite the opposite.

The greatness of a country is best measured by the social and political status enjoyed by its women.

From the day India chose democracy, it became one of the first countries to grant women the equal right to vote along with men — in comparison, it took 144 years for the US and 100 years for the UK to give women equal franchise. By the time women got unconditional suffrage in the UK in 1928, a 41-year-old medical doctor, Dr Muthulaxmi Reddy, had already become the first female member of the Madras Legislative Council in British India.

It may not sound like a big deal today — but it is.

Unfortunately, equal voting rights have not translated into better outcomes for women in the field of political participation.

After about 70 years of Independence, there are still significant hurdles to their socioeconomic and political upliftment. Cultural barriers, regressive social norms, gender stereotypes, illiteracy, safety and security issues in a patriarchal set-up mean women face intimidation from men inside and outside homes, and difficulty in stepping out of their roles as mothers, wives, sisters and homemakers. There exist significant hurdles to the political upliftment of women. (Source: Reuters)

It is a matter of concern that India suffers from one of the worst sex ratios in all of South Asia — 940 women for every 1,000 men. We rank poorly in the World Economic Forum’s Global Gender Gap Index — 108 out of 149 countries. On the economic opportunity and participation sub index, the condition is abysmal, where it ranks 142 out of 149 countries. The sex ratio in the voter lists also presented a depressing picture — in some states, as low as 800 to 1,000 males when I joined the commission in 2006.

To aid and increase participation of women on the electoral front, the Election Commission of India undertook the task of looking for the ‘missing women’ from the voter lists on a war footing —due to inclusion of gender as a principal element in the review of the health of our electoral rolls, women’s enrolment has since seen a phenomenal increase.

Post-registration, it is important to ensure that they also turn out to vote. For this purpose, pre-election surveys were conducted to explore the issues women face that discouraged them from exercising their franchise — some of the common issues faced by them include concerns about security (for instance, they feared they might encounter anti-social elements at the polling stations), family pressures, lack of adequate toilet facilities, etc.

Consequently, the subsequent voter education campaigns included targeted communication to family elders to break their resistance to women’s voting. A number of measures were put in place, such as separate queues for them, deployment of female staff at the polling stations, women police force and all women polling stations in select areas — in UP, in the 2012 elections, a simple but innovative idea of allowing two women in the queue to enter the polling station for every one man became a game changer.

The EC’s national and state level election icons also aided the task of bringing women out on the polling day. Celebrity folk singers, such as Malini Awasthi in UP and Sharda Sinha in Bihar, led millions of women to the polling booths.

Due to the EC’s Systematic Voter Education for Electoral Participation (SVEEP) which is aimed at educating and encouraging the masses and is intensively focused on women, the result was a 10 percentage point jump in women’s turnout in the 2014 General Elections- from 55.82 per cent in 2009 to 65.63 per cent!

To add to this remarkable feat, women outnumbered men in as many as 16 states despite the adverse gender ratio. The gender voting gap shrank to an all time low of 1.46 per cent in 2014. 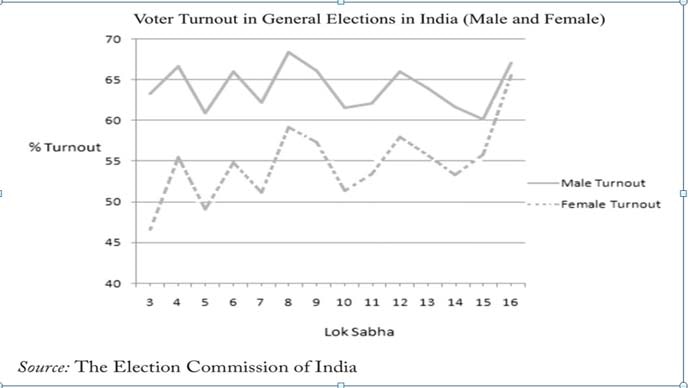 Having discussed the participation of women as voters, it is important to reflect on the sorry state of women’s participation in the legislatures — this is an abysmal 12.15 per cent in the Lok Sabha and even poorer in most Vidhan Sabhas. By comparison, even conservative Muslim countries in South Asia, such as Afghanistan, Pakistan and Bangladesh, have very high female representation, thanks to the policy of positive discrimination. Even Nepal, with its latest progressive constitution, has recorded dramatic empowerment of women. Source: The Election Commission of India

The reluctance of male-dominated Indian political leadership to provide women fair representation in its legislatures is a matter of great paradox. While women have been allowed equal representation at the local government level, their entry into Vidhan Sabhas and Parliament remains elusive.

Women were allowed 33 per cent in local bodies in 1993, which was later increased to 50 per cent in 2009. Many states have introduced 50 per cent reservations in municipalities and corporations — but the upper levels of government are still to pass their pending women’s reservation bills that have been debated ad nauseam.

In order to make India a truly inclusive democracy, women’s political participation as both voters and elected representatives is paramount. The best way to ensure better socioeconomic outcomes for women is ensuring that they get an equal say in governance. Mandatory reservations apart, the political parties are reluctant to even give enough tickets to women. As a result, hardly one-tenth of total candidates are female — the excuse of low ‘winnability’ of female candidates is a lie. Anyone with the knowledge of India’s electoral history is fully aware of the simple fact that their strike rate has always been two to four times higher.

Till women get their due share in political representation, it is an unequal democracy. March 8 every year is a good occasion to highlight the great discrimination faced by the biggest minority in the country — women. They must be encouraged in every manner possible to both come out to vote as well as contest elections.

This can only be achieved if there is genuine political will — and a sense of urgency.

Post your comment
#Malini awasthi, #Sharda sinha, #Women in politics, #International women's day
The views and opinions expressed in this article are those of the authors and do not necessarily reflect the official policy or position of DailyO.in or the India Today Group. The writers are solely responsible for any claims arising out of the contents of this article.