Elections, not ambitions, can fix the broken political process in J&K

For over a month now, the Jammu and Kashmir Assembly has been put under suspended animation. This has been followed by speculations of an imminent government formation. Rumours have been swirling about various emerging scenarios.

The first rumour being that of a "Hindu CM" installed by the BJP that found no takers, especially in the Valley. Undoubtedly, it would help the BJP revive its sinking political fortunes in Jammu and boost its image nationally — but such a move wouldn't be acceptable to the people of Kashmir.

Another development has been the suspicious and obdurate motives of various lawmakers to create a "third front". Ostensibly, this "seeks" to unshackle Jammu and Kashmir from the clutches of political dynasties that have plunged the state into turmoil. Nepotism and corruption have been attributed to all mainstream parties. It is, however, ironic that those heading this front themselves hail from families that have been part of the political landscape since decades. 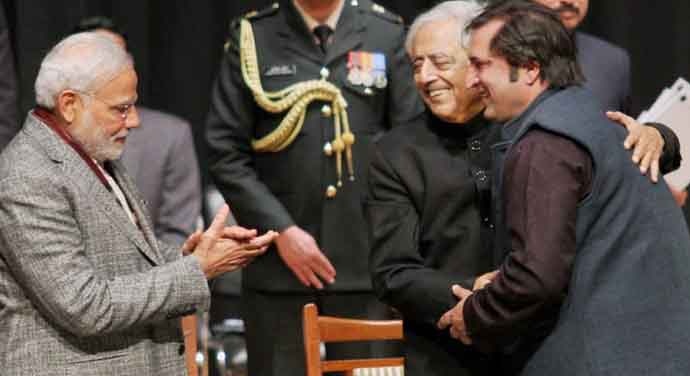 Interestingly enough, the dubious narrative that has been woven invokes values of democracy, honesty and integrity. Concerted efforts have been made to make these political machinations resemble a revolutionary movement.

But the new discourse that's being peddled is actually an unbridled hunger for power in the guise of "empowering people".

With just two MLAs, the Peoples Conference is not in a position to form the government, nor does it have any mandate to do so. However, with the Centre's tacit approval, it could engineer a split in either of the regional parties — the PDP or the NC. Thus, only a "mass rebellion", followed by defections, could lead to a new government in J&K.

But how will this front seek to achieve the restoration of democratic institutions by poaching MLAs who were voted to power due to the PDP wave that swept the Valley in 2014?

Wouldn’t this be a brazen violation of the democratic ideals and values they extoll?

Everyone's being accused: Charges of nepotism and corruption have been made at all previous NC- and PDP-led governments.

Wouldn't this so-called conscientious group do a great disservice to democracy? In all probability, it would cause further disillusionment among the people.

Rumours about frequent trips to the capital by these self-anointed "mass leaders" and their meetings with BJP brass also raise questions about their motives. It exposes their aversion towards fresh elections and a desperation to form a government by hook or by crook. Why not allow the people to choose, instead of engineering and facilitating unethical defections? Or, is this a once-in-a-lifetime opportunity that they would rather not risk losing?

Perhaps the most bizarre aspect of this narrative has been the odious comparison to Imran Khan's victory in Pakistan. Let's not forget the iconic cricketer had to wait for 22 long years to finally reach the position of Prime Minister. It was his sheer hard work and perseverance that finally paid off. On the other hand, we have a motley group, led by a questionable character, with an insatiable greed for the top job.

It is not undemocratic for a third front to emerge in the state and win the next elections. Especially since they seem certain about the growing disenchantment among people against dynastic rule. But it would be against the very spirit of democracy to install them through unfair political machinations.

History is replete with examples of how political institutions in J&K have been undermined and eroded over the time. This has only widened the sense of alienation and the trust deficit among Kashmiris vis-a-vis the rest of the country. Therefore, any effort to repeat such mistakes will be catastrophic for the state.

Democracy draws its power from the people. In the existing scenario, it now hangs in the balance by a precarious thread.