Krishna holds all the colours of the rainbow of human life.

If there is any single figure who represents India, its yogic spirituality, vibrant culture and ancient history, it is Sri Krishna. This is not any easy choice, as India is also the land of Buddha, Rama, Shankara and many sages and rishis of the highest order.

Similarly, if there is any single book that conveys the wisdom of India to the world, with its synthesis of yogic teachings and practical life wisdom, it is Krishna’s Bhagavad Gita. The Gita remains the most read and published book from India in thousands of years. 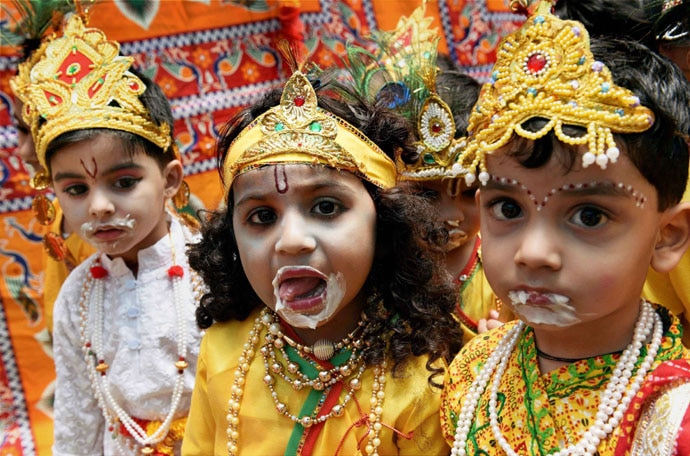 If there is one single figure who represents India's yogic spirituality, its vibrant culture and ancient history, it is Sri Krishna. (Photo: PTI/file)

The Bhagavad Gita is the prime source book of Hindu Dharma, and Sri Krishna is its most visible teacher. Yet, this is not because Krishna gave us a simple dogma or en-masse prescription, or claimed to have the last word — but because Sri Krishna brings together all that is profound, challenging and wonderful in human thought and action, and links it with the Supreme Divine.

Sri Krishna was a multisided personality, a renaissance man who mastered every domain of life according to the highest vision. He was not simply a monk, prophet or saint, but a master of our full human potential in the world and beyond, illumined by an unlimited Divine Light from within the heart.

For the study of the transcendent Vedantic philosophy of Atman and Brahman, Krishna’s key teachings in the Bhagavad Gita remain central, unlocking the wisdom of the highest self-realisation.

For the practice of Yoga, Krishna is Yogavatara, the incarnation of Yoga. His Gita is one of the most important Yoga Shastras, with each chapter forming a special yogic approach of its own. The Bhagavad Gita is the prime source book of Hindu Dharma. (Photo: Twitter)

As a teacher of devotion, Sri Krishna reigns supreme as the ultimate image and guide of Divine Love, detailed in the many heart-rending stories about him.

For Karma Yoga and transformative action, Krishna’s counseling to Arjuna in the Gita is foundation teaching.

As a statesman and diplomat par excellence, no one compares with him.

That is why Krishna and the Gita became the inspiration for India’s Independence Movement for Tilak, Aurobindo and Gandhi.

Yet, besides his towering spiritual and philosophical stature, Krishna became the icon of art, music and dance — lauded in India’s literary and artistic traditions and temple worship, north and south, east and west. His flute is the basis of all music. His Ras Lila is the ultimate dance. Indian painting revolves around his colorful image.

Moreover, Krishna has a special form and teaching for every age group and phase of human life. There is the infant Bala Krishna delighting his mother, the trickster youthful Krishna fascinating his friends, Krishna as the enchanting lover with his consort Radha, extending to Krishna as the husband, friend, warrior, king, and supreme Guru, each with its own wide dimension of experience and wisdom. Krishna holds all the colors of the rainbow of human life, extending to the boundless universe, represented by the peacock feather he wears, and the all-encompassing cosmic form he assumes, Vishvarupa.

The need to connect with Krishna today

One must remember the difficulties Krishna had to endure at birth, facing the wiles of Kamsa, who tried everything to prevent him from being born and to murder him after he was born. Krishna’s birth teaches us the daunting challenges of human life for even the noblest souls. Our material world is not an easy place to live, much less to evolve in consciousness, as is our soul’s aspiration. It is a realm of difficulties and dangers that force us to develop patience and detachment, or lose our inner light. The message of Sri Krishna is to carefully face all life’s difficulties, but remember to affirm that bliss is eternal. (Photo: Wikimedia Commons)

Krishna’s life was marked by struggle and battle, with enemies on every side. Even the small group of the five Pandavas who became his friends required his constant help and assurance to sustain them, encountering every sort of misery and degradation. Yet, Krishna always daringly pursued the highest possible for all and found in every experience a way to reach the transcendent.

The message of Sri Krishna is to carefully face all life’s difficulties directly and decisively, but remember to affirm that bliss is eternal, from Kurukshetra to Vaikuntha.

Also read: When Lord Krishna came home as a dwarf