KJo, Jo is not for joker: From jackets to jokes, what's wrong with Karan Johar?

What is wrong with Karan Johar these days? No, really! He is increasingly becoming creepily crazy or crazily zany with his public outings — language, demeanour, mannerism, carriage, soigné et al.

There was a time — in not too distant a past — when I really liked him. He came across as a wise, pleasant, mature, extremely amiable and likeable celebrity, who made good and feel-good cinema. He spoke sense at his interviews, he asked good, thought-out questions while still spinning the goss during the interviews he conducted, and managed to convey an element of thoughtfulness and balance even amidst all that chaff and gaiety.

He wrote the fine tearjerker, Kal Ho Na Ho, my favourite of all his films. He introduced several new hooks for the industry in his other films; some bold, some brazen, but all stylish and opulent. 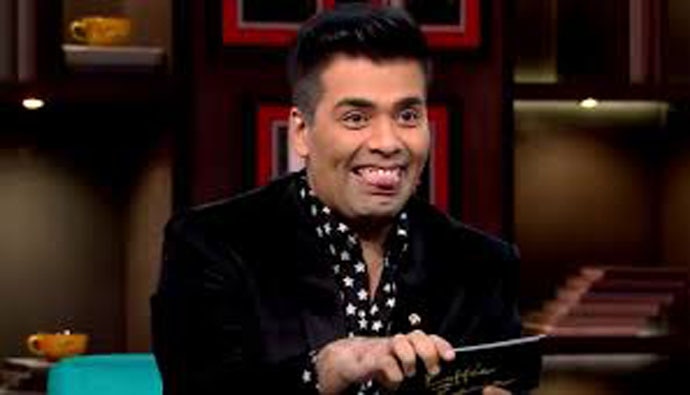 There was a time — in not too distant a past — when I really liked him. (Photo: Hotstar screengrab)

And he has turned out to be the canniest, shrewdest, smartest producer of tinsel town, who seems to be touching product that is bound to become a super hit.

Yet, in his personal choices and appearances, he is pulling over a veil of utter strangeness and superlative silliness; that I feel takes away the sheen from all that he has worked hard for.

It seems that he has a set of twins — Tweedledum and Tweedledee — sitting atop his embellished epaulette on his curtain-cloth jackets. They tell him which crude act to pull out alternately, and Karan dances to their tune.

How else do you explain his nonsensical Insta stories from the sets of India’s Got Talent! I caught two of them today and it set my head rolling.

What persona is Karan Johar trying to create? What internal or social barriers is he attempting to break down? Why is he trivialising joviality and banter and light conversation, often making them look and sound cheap, and many a times vulgar?

In the last season of Koffee with Karan, he had the extremely crassy and loud Ranveer Singh chuck a shoe at him as a hilarious gag. Is that our standard of funny? Hey, it is not even slapstick.

In the latest on-the-set campy videos Karan Johar is shooting on India’s Got Talent with his co-judges, he has Kirron Kher telling him that he’s dressed like a cabaret dancer. In another he gets called the “B***h” by the senior actress and MP.

In one video, Malaika lets the camera rest on her derrière before she turns around to have Karan tell her that she is looking like a tacky 2.0 version of Beyoncé. In the second one, the phone camera spends a little time over Malaika’s décolletage before moving up to her face to carry on the badinage.

In the dynamic, volatile climate charged with #metoo and the awareness around what women want, this needless objectification is more contextually harming than harmless hamming on a platform like IGT. Karan's Insta stories with his co-judges on India's Got Talent turn banter and light conversation to something cheap and vulgar. (Photo: YouTube screengrab)

I am not being a prissy prude. But they say there is a time and place for everything. The trashy videos — though in part a lot of fun, to be fair — are being shot on the sets of India’s Got Talent, that has audience and participants from big and small corners of India with star-struck eyes and aspiration riding high on their shoulders.

The videos are intended to beguile and catch eyeballs, but are just short spurts of a little class on cheesy fluff, poor jokes, misplaced purpose and ill manners for the social media worshipping millennial.

This season, on KWK, Karan has kept up the unabated intensity of double entendre, he laughs the loudest at his frivolity, he froths at the mouth trying to control his sickeningly deranged pleasure on his own ludicrousness while lampooning even the most serious of issues, such as gays, nepotism, career advice, healthy competition, sexuality and so on.

Homosexuality, or LGBTTQQIAAP, to be more precise, is a staid and serious issue with severe repercussions. It can no longer be used as an item for a standup or sitcom or for audience LOL moments or cartoon creation, and least of all for Television Rating Points.

Is somebody close to him in his advisory circle telling him that ‘shock and awe’ is the way to go, both in his show to keep the TRPs high, and in his personal presence in order to stay in the reckoning?

Koffe with Karan was popular from the beginning, with just the right dash of pizzazz, puns, the amusing element, the naughtiness and shock value. There was no need for it to become deplorably debased.

Similarly, Karan has assiduously worked hard to make himself the brand that he is today. And he did it with zeal and zest, honesty and openness, astuteness and with the honed quality of attractiveness about the whole thing. 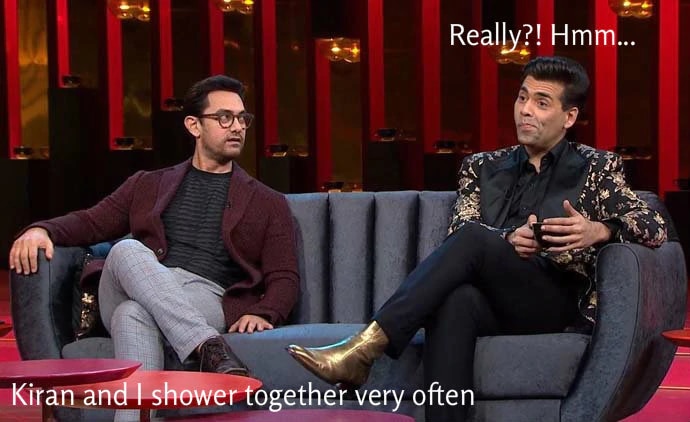 Koffee With Karan always had the right amount of naughtiness and shock value. Now, it's getting just debased. (Photo: Hotstar screengrab)

Whether it was his battle with the bulge that he is continuously triumphing over, and telling the world that he is not ashamed anymore to have been fat or embarrassed about the grueling drill he must adhere to, in order to stay on track.

Or sharing with the world his inhibitions, reservations and the stigma he faced each time somebody called him effeminate. How admirably Johar has shushed his detractors on this score is such a fine example. He has carved out his own unique identity that need not hinge on the significance of gender. He has talked about gays and gayness openly, confidently, sincerely, bringing a whole lot of respect and recognition to the subject.

So why has he begun to ridicule this aspect is beyond my reasoning. I don’t know whether Karan Johar is gay or not, and frankly I don’t care. All I care about is that he has attempted to bring out the issue and put it on the table with his shows and films, and that deserves a big hurrah.

But what calls for the biggest Boo is how he overacts with his dance moves and hand gestures, the quaint walk and the tittering laugh. What is he trying to say or do? Why is he accentuating the stereotype with his asinine antics?

If Karan needs a tutorial on how to conduct his personage, then he just has to note how some of these sexilicious, handsome, very famous, extremely talented men behave. For starters, look at BD Wong, Ricky Martin, George Takei, Ian McKellen, Stephen Fry, Rupert Everett, Neil Patrick Harris, Tuc Watkins, Freddie Mercury and you already get the drift of what I am trying to convey.

Johar just has to register the gravitas depicted by Ellen Degeneres, Valentino, Gianni Versace, Tom Ford to get his act right. It seems that he has Tweedledum and Tweedledee sitting atop his embellished epaulette on his curtain-cloth jackets. (Photo: Hotstar screengrab

Or look within India and take a leaf out of the rulebook of Vikram Seth, Manvendra Singh Gohil, Rohit Bal and a handful of others who have pulled out the shame and put in place the pride in the biological aspect they were born with.

I really can’t get over the very handsome, the very accomplished Nate Berkus who openly grieved for his soulmate Fernando Bengoechea on The Oprah Winfrey Show. Fernando met his untimely end in Sri Lanka during the 2004 Indian Ocean Tsunami. Almost after a decade, Nate went on to marry fellow interior designer Jeremiah Brent, and fathered two children via surrogacy. His appearances have been as fine and remarkable as he has carved out his life.

None of the above seem to have made a caricature of their life choices or genes. So why does Karan do it — at every stage show he hosts, his own show, other shows, now even in the interviews he gives or takes!

With the career decisions Karan has made, the praiseworthy risks he has taken, the quantum of work he has put out in a wide array of things — from writing to directing to producing to hosting to costume designing to even acting, KJo needs to take a grip on the fact that Jo in his name does not stand for Joker. With all that he has achieved he is a ‘Jauhar’ (priceless) for his parents. Yash and Hiroo.

Karan Johar went ahead and set another life goal for us by becoming a proud father to Yash and Roohi. Now he must set the right life lessons for them. Senselessness in the name of self-mockery, illogical preposterousness on things that merit a wise word at each opportunity we get, misconstruing crappy crassness for jest and humour, and mindless exaggeration will have to stop, if Karan wishes to reclaim the iconic stature he has built for himself. A whole generation is watching him now, and his own kids will look at him intently in the time to come. 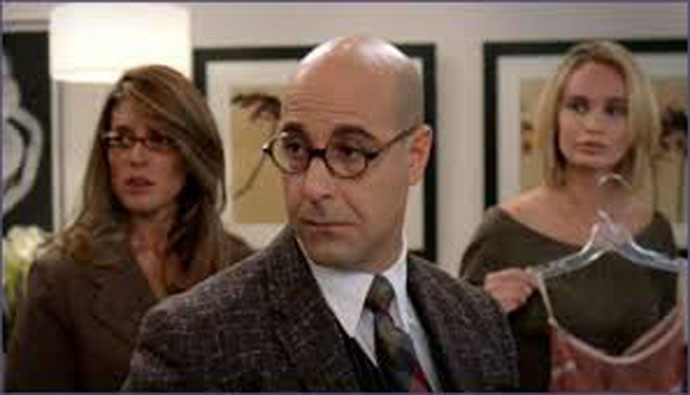 It will bide Karan Johar well to look at Nigel Kipling from The Devil Wears Prada. (Photo: YouTube screengrab)

Karan seems to have got into a race to become a hybrid of Elton John and André Leon Talley of Vogue. In fact, he has even begun dressing up like both of them and has cultivated gestures and speech modulation after them.

If this is how he wants to live through this phase, then it will bide Karan Johar well to look at Nigel Kipling, the character played by Stanley Tucci in The Devil Wears Prada. He will not have to look far for poise, sobriety, jocundity, grace, innate niceness and gentlemanliness!

Until then, it is toodles to you Karan Johar!