Why this Kashmiri coach feels yoga can bring peace to Valley

A momentarily content Waheed Ur Rehman Para, the youth president of PDP, is taken with the flurry at the Sher-i-Kashmir Stadium in Srinagar as all the participants, organisers and officials pack up after a successful display for the third International Yoga Day on June 21.

Five hours ago, at six in the morning he was not wearing this smile as the unyielding downpour swamped the open-air Bakshi Stadium, where the event was to be held. “While the base was being shifted and organised, Shabbir motivated all the children and rounded them up in no time to come here,” says Waheed admiringly. Never having heard that name before I enquire about the staunch character, “Baffles me every time that militants are known everywhere by everyone whereas great driving forces as Shabbir are anonymous,” says the youth leader.

Curious, I start chasing Shabbir Ahmad in his J&K Sports Council official tracksuit, scampering from one child to another, a moment on the grounds of the multi-purpose stadium, the other on the 5,000-capacity stands until I lose sight of him in the congregation. I finally track our sturdy, fit and amiable man at 4pm the next evening in a newly built, concealed little yoga room in the basement of the same stadium, teaching his class of 10 girls on four foam gym mats. 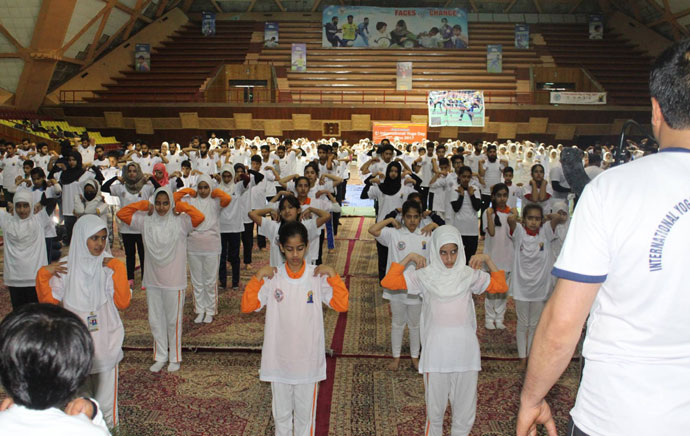 Cordially, he requests if I can wait till the class gets over, and I happily oblige to observe him teach passionately. He then puts together a little demonstration to show the tremendous talent of his students as they bend with elasticity that can shame molten glass.

While the young woman from Arunachal Pradesh packs her bag, the teenage Sikh girls braid each other’s long hair, the little Muslim girls don their hijabs back, they chatter about the previous day’s event. Reading the respect on my face, “These are just 10 girls, we have 5,000 students enrolled with us all over Kashmir,” says a proud Shabbir.

Amazed at the number I ask about the coupling of yoga and Hinduism and the enlightened acceptance in the Valley, “The association of yoga with one religion is obviously a wrong concept. It is purely a science of the body, mind and soul. There were wrong notions in Kashmir like anywhere else in the world, but I encouraged people to try it once and when they did attend a class, they saw there is nothing for or against any particular religion and it is purely a physical, mental and spiritual practice. And then it spread from the first 10 to thousands through word of mouth. The wrong notion has slowly died out,” relays Shabbir, who is a three-time gold medalist in national yoga championships and has also represented India in international events in Gujarat and Bangkok in 2007 and 2010 respectively. 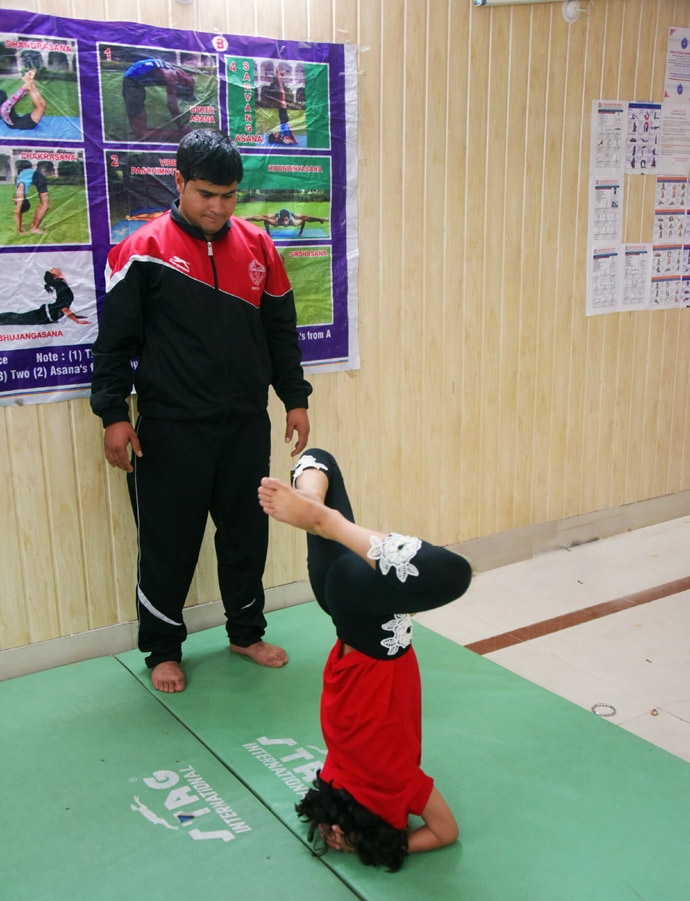 With the state of unrest since 1989, I wonder how Shabbir reached this pinnacle, as sports was not even a fleeting thought for people.

“I struggled a lot, I’m not going to lie. My parents were the only supportive force as back then there was no contribution from the government here. People were very close-minded when it came to yoga. Institutions were unaccepting of it being a form of physical training in their premises because it had been made overtly religious in our country.”

Even after having a degree in MSc in yoga science from Rishikesh and masters in physical education, being unable to circulate the benefits of his knowledge must have been testing. Yet he ardently struggled for his convictions.

“We want to promote as much awareness and remove the wrong concepts. We want everyone, especially the children to be mentally, physically and spiritually fit as it keeps you away from wrong doings, which is the need of the hour.”

His sincerity reminds me of Waheed’s words, “Once someone comes into yoga, militancy ceases to exist for him or her as they build so much mental resistance that they can fight the negativity within themselves.”

With 60 per cent of the population being under 18, one man’s discreet efforts have changed the life paths of so many others who otherwise would have been on the roads along with the stone-pelters, aimlessly looking for validation.

After having been appointed as the Sports Council yoga coach in 2005, Shabbir has trained over a 100 students who in turn have become coaches and have widespread the benefits of yoga throughout Kashmir. He, however, is not satisfied.

“I want more youths to come and learn this beautiful science and change their lives wholly by bettering themselves and making a career as coaches and trainers for other fellow brothers and sisters. Not only that, imagine people from all over the country, all over the world coming to our little paradise to learn yoga.”

Why does Shabbir’s dream seem so far-fetched? Why is his name, his cause not known to people? Waheed puts up these questions and answers them too. “There is no legitimacy in the work he does because here social validation is of violence, of the protests and of deaths. You ask around who the 10 worst people of Kashmir are, everyone will know, but ask about the 10 good and they will be tongue-tied cause these good people are not getting acknowledged. And till the time these people do not get acknowledged, they feel they’re of no value and the work they’re doing gets delegitimised and hence we as Sports Council encourage and support them. But they need to be known on a larger platform and the state should push them as the way he is 'building' the children, no army can.”

Shabbir Ahmad, now 32, having initially learnt yoga on his own through books is quietly crusading for his belief. Way before Prime Minister Narendra Modi made it his "movement", this silent ambassador has been working on this huge alternate campaign for more than a decade in this Valley only for the betterment of others. Having faced social and religious impediments single-handedly, this driving force still asks for nothing for himself, but prays to get better resources for his students and more acceptance from people.

What would the state of things be if people like Shabbir had been making the headlines? Could yoga, which is one of the biggest economic prospects in rest of the country, create livelihoods and alternate campaigns in Kashmir?

Why is violence winning when you have such great role models, I ask Waheed.

He says, “Deep down it is all about recognition. And here being violent has more face than being silent.”