As we landed at the Srinagar airport, we stopped for a few seconds to inhale hard. We were coming back to Kashmir after 14 years.

My first visit to Kashmir after a 14-year hiatus was in 2004. I landed at the Srinagar airport with my parents, husband and our five-year-old son in tow. Despite the pretence of absolute calm on the outside, my emotions were running amok. In my head, I was questioning my decision. Had I gambled with their safety in bringing them here? But the questions were too meek to dilute my resolve to reconnect with my roots. I was possessed.

Today when I look back, I realise that we all have our own way of dealing with loss and injustice. Mine probably was to snatch the power back from the situation and not allow history to take control over where I belonged. This was home and I wanted to step right back in. I had no intention of allowing my parents to die with the unmet desire to revisit Kashmir. It was a choice I made, never to regret.

Experiences may take a more sorted and rational hue when viewed through the prism of years. But at that point in time, it was an adventure fraught with a lot of risks. All precaution had to be taken as the air was full of mistrust. I had no clue how strong an enemy line would have taken shape in 18 years. We had heard soul-stirring and barbaric stories back in the 90s. 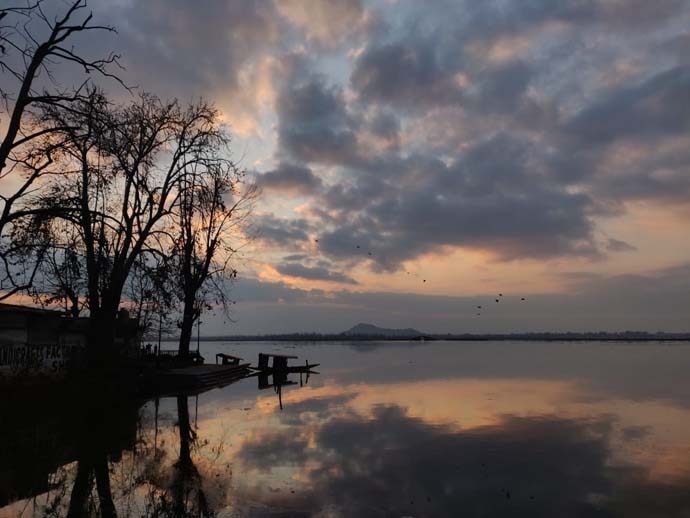 In one’s homeland, the air anyway has a therapeutic value and to top it all, this was Kashmir. (Photo: Vitasta Mishra)

The first manifestation of discomfort struck at the Delhi airport, when the deghur (the ornament worn in the ear by married Kashmiri Pandit women) dangling from my mom's ears, caught my attention. It would be a bad idea to wear our identities on our sleeves. I requested her to go to the ladies' room and take it off. She understood. The deal was, till the time we had tested the waters, we had to masquerade around as just another group of tourists (not that there were too many flocking the Valley at that time). 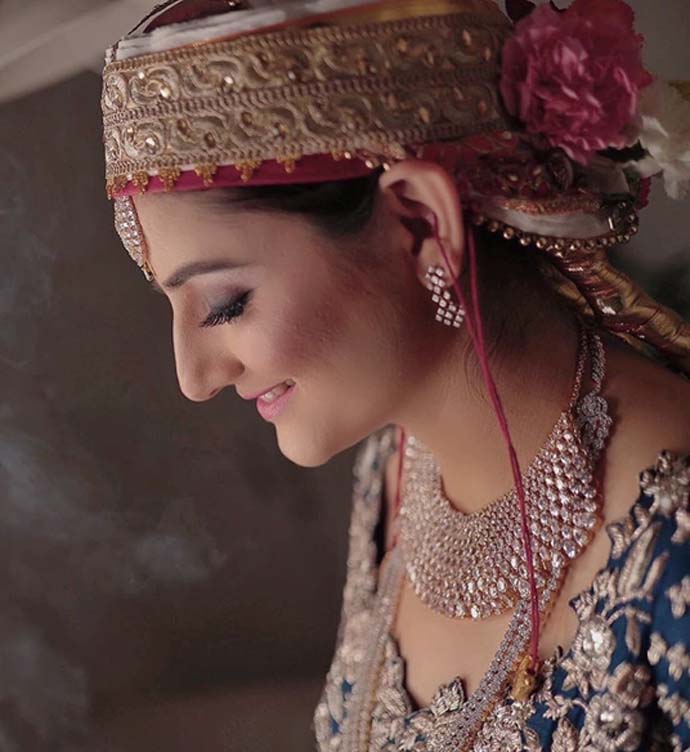 I requested my mother to remover her deghur (the ornament worn in the ear by married Kashmiri Pandit women) dangling from my her ears. We were to masquerade as tourists. (Representative photo of deghur: Instagram/ @makeupbygautam)

After we deplaned, as if as an orchestrated move, my parents and I stopped for a few seconds to inhale hard. In one’s homeland, the air anyway has a therapeutic value, and to top it all, this was Kashmir. We walked to the arrival lounge, giving way to silent tears. My son clung to me sensing that all cannot be well when adults are caught sniffing. That shook us out of the emotive zone and we braced for further impact. There was a pregnant silence in the car as we drove towards our hotel at Gupkar Road.

The driver was a local and, in all probability, had recognised that we were Kashmiris too, but after observing our disposition, he gave us space and continued to speak in Hindi. The roads were flanked by armoured vehicles and the forces were standing guard every few meters. All that cemented the feeling of our being in a conflict zone.

The first day was spent in just taking in the air, talking to the hotel staff, exchanging notes with random gardeners and cleaners. The hotel staff could not get enough of us since we were the only guests, barring the chief engineer working on a government bridge project who had parked himself there for multiple months. The GM and the F&B manager spent long hours updating us on the developments and the emerging local influencers. The conversations and insights were a journalist’s delight. And to an extent, the place was El Dorado for my son as he would trot into the kitchen with friendly bhaiyyas and return with unending packets of joy food. Outside, however, things were a bit tense. We ventured out for a shikara ride on the Dal Lake and interestingly, the boatman had to get his guests logged in at the Kabutar Khana for accountability purposes. Such was the trust deficit.

Gradually, we kept the disguise of outsiders and started visiting places that my parents wanted to see again — Kheer Bhawani, Shankaracharya Temple, Zeashta Devi, Hari Parbat, Lal Chowk and more. For me, it was a pilgrimage because I knew it would help them sleep better. We ventured out for a Shikara ride in the Dal Lake and the boatman had to get his guests logged in at the Kabutar Khana for accountability purposes. (Photo: Vitasta Mishra)

Giving in to a lot of encouragement from the hotel staff, we ventured out of the city to drive down to Gulmarg. As usual, the facade of being outsiders was being maintained. It was then that my five-year-old, who was loving every bit of the attention he was getting, decided to exhibit the most latent talents that rarely surfaced even in Delhi. He broke into, “Amat bhai kamtyo, khatuk ba zange” — the only Kashmiri rhyme he knew, and crooned it out, full-throated. That was a moment in history. It broke walls and was probably our initiation back into who we really were — Kashmiris. Smiles were exchanged with the driver and the ice was broken, even though nobody said a word.

As we stopped for a tea break, my father spoke to the driver and we caught them hugging each other. He was an old-timer and seemed to have recognised my father in the first instance as the latter had been a thriving businessman and a highly social being, frequenting the hotel with guests. But the driver had respected our space and hadn't broached the topic.

Post this, nostalgia struck with a vengeance and my father was like an unbridled toddler. The next few days were spent going to our ancestral house, the Ishber Ashram in Nishat where my parents had studied Shaivism under Swami Lakhman Joo, Little Sons in Amira Kadal where my father had grown from an accountant, as a student, to becoming a business partner. We visited all the eateries that my parents had frequented right from their courtship days. We found the baker whose pastries and softies could account for a larger part of the bulge in my belly and the roundness of my cheeks. We even went to scout for the tailor who would create bespoke magic for my much-fashionable parents. The trip was a journey back in time.

The success of that one trip led to a series of trips, including the ones when I was expecting my second baby. I wanted to initiate the baby into Kashmir even before birth.

Our pursuits were getting pretty expensive so we had to make a decision. Was it time to refurbish the house that we could call home? We finally renovated an old house to make it habitable. Given the long absence from the scene, it was a tall task to try and put it back together, especially given the 'administrative terrorism' in Kashmir. Digging into the paperwork, getting the relevant permissions — it was not something that an average mind is trained to do. But by then, we had made many Muslim friends whose kick, I presume, came from the pride of helping a Kashmiri Pandit family rediscover their roots. 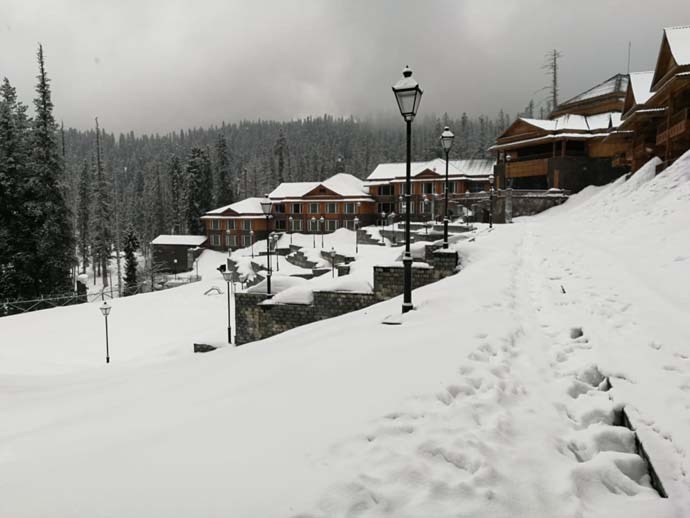 When we returned after a fortnight in Srinagar, right in the middle of the Challi Kalan, we are natives once again because we survived the chill and the lack of connectivity with aplomb and dignity. (Photo: Vitasta Mishra)

The journey introduced me to some of the most wonderful humans like Yaseen Tuman, Latif sahib and Nazir Punjabi. They made sure the house got transformed into a home that I can today visit, as and when I please. They stood by me like a rock.

I returned recently, after a fortnight in Srinagar, right in the middle of the Challi Kalan (the 40 days of extreme chill). My daughter accompanied me and I can say that we are natives once again because we survived both the chill and the lack of connectivity with great aplomb and dignity.

And while we were at it, we met many other youngsters like my daughter, as we walked up and down the streets of Srinagar. One can safely say that experience is a great unifying bond. We saw in their eyes, the hunger for achievement and the need to belong to the larger world. For instance, on the last day of our stay this time, we were at an eatery, enjoying a quiet lunch when this girl sitting at the next table joined the number that my daughter was humming under her breath. The beautiful Highland lass, almost my daughter's age, adorning a hijab that only highlighted her perfect features and deep brown eyes, sang along, word to word. They seemed to have discovered each other through Rachel Platten's Fight Song, crossing the chasm of reality and perceptions that could have done them apart. The almost infrasonic jamming stopped and they exchanged million-dollar smiles and got busy eating. I tucked away that moment as one of the most beautiful ones from our trip to Kashmir this time.

It also dawned upon me that irrespective of how others would like to make it look for us, the Hindu and Muslim Kashmiri can never be told apart. We are a creed of beautiful and bright people. Our trust was belied by the Hindu Maharajas and politicians as much as it is being abused by the Islamic radicals. But now is the time, political masters and religious leaders must back off and give us our space.

We are and wish to be remembered as those born in the land of Sufis and Pirs. Period.