Why I, a Kashmiri Pandit, picked up the pen instead of the stethoscope

In the run-up to the anniversary of the Kashmiri Pandit Exodus in January, there is a case to give voice to those who lost theirs, in the amplified din of power or politics.

History is never chronicled by the victims. In fact, it falls victim to either a conspiracy of silence or worse still, it plays into the hands of the oppressor.

The powerful get the luxury of inking vested narratives while all that the victims can do, is try and survive. Orchestrated events are pushed down the gullible reader’s throat while those who actually live the tragedy — the characters of the story – are busy looking for a piece of land to either burn or bury their dead or simply find the ground to stand on. That has always been the irony of history. Therefore, the chronicling of the Kashmiri Pandit Exodus has been no different.

But we need to change that. We, Kashmiri Pandits, especially those of us who chose the pen as our weapon. It is high time we chronicled the stories of struggle; the way they happened. This, before the exodus generation land on the wrong side of age and their side of the story gets consigned to an earthen pot, lost forever.

I shall make a beginning here and pen my story as an offering to the struggle of thousands of my tribe, who could not put pen to paper to write their woes or simply did not live to tell the tale. 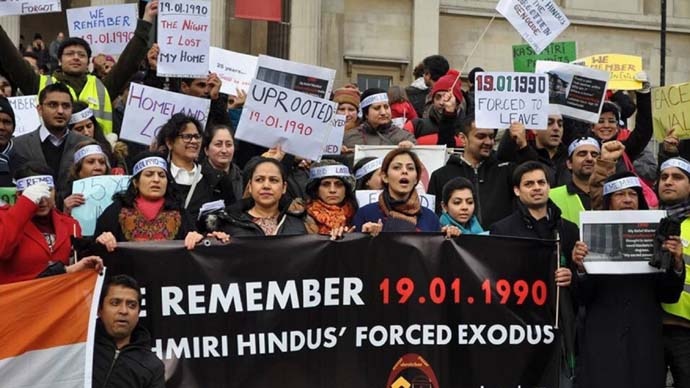 Will the Kashmiri Pandit exodus remain the most underplayed ethnic cleansing in India history? (Photo: PTI)

Before I start though, a statutory disclaimer is in order. My stories do not have the gore of murder, the inhuman accounts of unaccounted rapes or bodies being sawed into two or mutilated beyond recognition. You might have heard those stories. But I have none of those. I am an outlier who skirted the Exodus by a few years. My mother worked with the Kendriya Vidhalaya and took a posting out of J&K in the late 80s. My dad, who was a businessman, shifted base to Jammu as an aftermath of the exodus. Destiny’s hand spared us a refugee camp.

So, technically, I was not a part of the exodus; just that our temporary exit turned into a permanent exile since we could never go back home after that. But, I cannot even start imagining the plight of the families who left the Valley overnight and I cannot pretend, even for a second, to know their agony. At best, my stories are only a reference point for you to stand for a while and look around, to understand what was happening to my tribe at various times in history that is yet to be written.

It was the summer of 1990. My family was stationed in Pathankot and I was travelling to Jammu to appear for a medical entrance exam. Gradually the train compartment got filled with a boisterous crowd of young Punjabi lads, who decided to have a no-bars conversation. One of them broached the subject of a pamphlet he had seen where KP families staying in Jammu camps were offering the hands of their daughters to any suitable candidate along with a dowry of Rs 5,000. This revelation got the boys all charged up. What ensued was verbal hell in my hearing: “Kashmir ki kali aur panch hazaar bhi”; “Abey shaadi to bahaana hai, baad ki baad mai dekh lenge, abhi chalke utha lete hai.”

I sat at the window with my face hidden in my book. They continued to say things that stabbed my consciousness and I dug my face deeper into the book. I felt a strange shame in being a Kashmiri Pandit girl, as if what had happened to us was our own wrongdoing. With the kind of typical Kashmiri upbringing, I could not find the courage to interject, lash out — to do something that would absolve me of the guilt that I feel to this day, for not exploding in their faces.

But that is who I was at that time. That is who most of us were at that time — typically shy, withdrawn, non-aggressive KPs, mercilessly fed to the summer fires of Jammu and elsewhere in India, trying to cope with the trauma of losing everything familiar, including our homes. There was no time for activism and protest because even if we knew how to do it, we needed to think where the next meal was coming from. So please spare us the wisdom on how we all listened to a man named Jagmohan and left all our life’s savings because he wanted to stifle the Muslims in the Valley by stopping their supplies. The first false narrative alert!

Anyway, getting back to the story, I appeared for the exam and returned home in the evening. Only after the lights went out, when I was alone in my room, did the morbidity of the incident in the train hit me like a whiplash. I started seething with anger, I wept uncontrollably thinking of the father who would have been held to ransom by his circumstances, to publish such a pamphlet. I shivered in the skin of the daughter, who would have to walk away with a stranger because her family could not provide two square meals and a secure roof over her head. I shuddered to think of that parallel universe in the Muthi or Jagti camp.

That was the tipping point and I beaked out of myself — out of the restricted, inhibited shell of a shy KP girl who was trained to walk along a straight line, wearing blinkers of convention. I wanted power (more nervous and emotional than physical) to chase the vultures to their homes. I wanted the conviction to name and shame them in front of their sisters and mothers for feeding on the misery of a community whose life was hanging, tethered to almost nothing.

Next morning, I walked up to my parents and told them I did not want to become a doctor. I wanted to pursue journalism and be a part of the media. I chose to get a voice, to be a voice of the people who couldn’t talk above the din of the powerful.

There are hundreds of stories from where this one comes. But the question is, are there enough listeners? Or will the Kashmiri Pandit exodus remain the most underplayed ethnic cleansing in the history of India?

Also Read: When I went back home to Kashmir as a Kashmiri Pandit 14 years after the exodus