Most people know Kerala as the state with the highest literacy rate in the country, what many people outside of the state are unable to see is the vibrant student activism lying at the heart of its educational institutions.

In the 1950s, when student politics everywhere else was going through a dormant phase after the apex it reached during the Independence struggle, it continued to maintain its momentum and thrive in Kerala and West Bengal.

Here, as a popular culture, the youth tend to enrol themselves as members of the students' wings of various political parties at a very young age, with most starting during their primary school days. Though not all of these them join active politics in their later years, it undoubtedly leads to building a citizenry that is politically aware, and in turn, strengthens democracy.

In utter ignorance of the state's rich legacy in student activism, a division bench of the Kerala High Court recently banned activities like protests, hunger strikes and other such forms of agitation from educational institutions with the freedom to rusticate or expel any student indulging in them. The ban has drawn widespread criticism from all quarters cutting across political boundaries. And it was bound to be so, considering that more than 70 per cent of Kerala's political class comprises former student leaders. 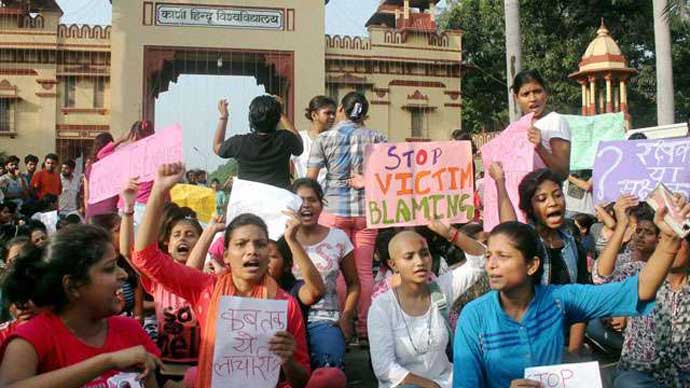 In campuses, the student organisations serve as a window to different worldviews enriching our experience and perspectives. Photo: PTI

Starting with the incumbent chief minister Pinarayi Vijayan, most of the members in his council of ministers, the leader of Opposition Ramesh Chennithala, former chief minister Oommen Chandy, former Union minister AK Antony, and the younger generation of MLAs in the Kerala Assembly, all have roots in student politics.

The age-old obtuse argument that educational institutions are only meant for imparting education and not politics also finds its way into the court order. It disregards the fact that education lies not just in the classroom but outside it as well. The fundamental goal of education is not to just score marks in examinations but to expand one's horizon. And it is an undeniable fact that politics shapes every aspect of our lives, and dictates how we live, recreate, and graduate.

In campuses, the student organisations serve as a window to different worldviews enriching our experience and perspectives. The ban would only result in churning out a politically naive citizenry.

It is also to be noted that the court order is in direct contravention of Article 19 guaranteed by the Indian Constitution. Students organisations also serve as a grievance redressal platform for those who need their assistance, act as a watchdog of the excesses of the administration and hold them accountable, fight for the rights of the students when their voices are not heard, and also lend a helping hand in coming up with processes that are more in sync with the evolving needs of the student fraternity. Not just that, ethnicity, caste, and religious-based student organisations serve as a support system to students belonging to marginalised sections who find it difficult to assimilate themselves to the majority culture of the campus. The said order has failed to take into account the huge role student politics plays in the society.

Unfortunately, in the world of student activism, the Kerala High Court judgment comes as a huge setback in the backdrop of the massive student unrest which our campuses have been witnessing in the past few years.

With regular attacks on the autonomy of educational institutions and the freedom of students, sustained student movements are the only mode to fight authoritarian tendencies, as has been witnessed at Jawaharlal Nehru University, Film and Television Institute of India, Hyderabad Central University, and most recently, at Banaras Hindu University.

It would not be wrong to say that the order seems to be driven by the sentiment to gag any form of dissent and should not be allowed to prevail in the world's largest democracy.