I was watching this Franco on TV yesterday. He was in his full flow, glibly in his elements.

Fr Stephen, named after the martyr for truth in the calendar of the church, the priest-in-charge of a Catholic congregation in Wynand, Kerala, announces to the world that Sister Lucy has been interdicted from discharging religious functions in the congregation due to the resentment of the parishioners against her for extending support and solidarity to the nuns’ strike against (bishop) Franco. The removal of Sister Lucy only adds to the scandal around the church. (Photo: ANI)

In an instant, the parishioners, on whose behalf the punitive action was made out to be effected, rise in revolt. They force the priest, the shepherd of the flock, to convene a meeting of the parish committee.

The members of the congregation assemble at the venue of the meeting in full strength. They condemn the action against Sister Lucy and demand its peremptory revocation. The priest is forced to swallow his words and back off from hounding the sister.

The lie of the priest is exposed by the congregation as a whole, who declare themselves to be in cent percent solidarity with the targeted sister. He is proved to have lied thus not only about Sister Lucy apparently, but about the parish as a whole.

Yet, he will continue to exercise his ‘sacred ministry’ as though what he has done, the mouthing of foul falsehood, is no more than routine.

He will administer the sacrament to the very same parishioners who rose in resentment against his lying. They will kneel before him, with their mouths open, to ‘receive the body and blood of Jesus’ who said, “I am the truth..." 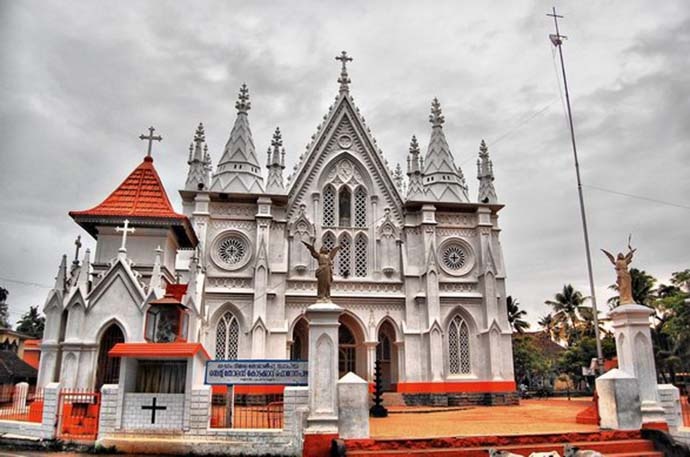 This is meant to be the house of truth. Can lies be allowed to prevail here? (Photo: Wikimedia)

It is important for all who believe in bottom-line morality, if not in Biblical principles, to investigate the genesis of the priest’s perverse lie.

It is unlikely that the priest broke out into this fit of falsehood from personal inspiration, or was merely indulging an esoteric gift of turning lying into a high art.

Even the most hardened priests have a conscience! Priests too are human. That given, every priest is bound to experience traumatic self-revulsion in the wake of lying.

Lying, in other words, can never be a natural or voluntary exercise. It is a coerced act.

So, two questions arise out of this.

First, who coerced Fr. Stephen? Second, if he can be so coerced, is he a priest, a follower of Jesus Christ - or a slave of the church? May be one more question, if you please. And that, on the basis of the plausible hypothesis that Fr. Stephen would have lied for the sake of his church.

If the church that Fr Stephen serves can be served, or saved, only through his lying — imperiling his immortal soul by his own creed — what is this thing that we call church?

As to the first question, we can start safely from the obvious.

The priest was not coerced by his parishioners.

Nor was he coerced by Sister Lucy.

So, there is only one source of this coercion: the church hierarchy. The sort of hierarchy that the rape-accused, (bishop) Franco, represents.

By the way, I was watching this Franco on TV yesterday. He was in his full flow, glibly in his elements. Not a trace of embarrassment. No whiff of shame. No touch of remorse. Not even remote realisation that something viscerally awkward is underway! No, he has shown no embarrassment even now. (Photo: ANI)

Either he is divinely innocent or he is diabolically hardened.

We have to wait a while to know which.

But we know this little thing from the investigating officers. Franco reportedly lied to them. So, he doesn’t appear, at least for the time being, to be an archangel. Reportedly, the police are contemplating subjecting him to a polygraph test. Imagine a “bishop” being helped appropriately by drugs to tell the truth! A pretty pickle this!

We must get Fr Stephen’s plight aright. His plight is not personal but institutional. He apparently believes, as also those who arm-twisted him, that the church can be served and saved, by telling lies about the body of believers, who are the church.

So much for the caring spirit of the church, faithfully stewarded by these shepherds of the flock! This priest, and the church he serves like a slave — only slaves are stripped of freedom of conscience — have no qualms about compromising the moral integrity of the people to save the skin of one of their own breed.

This is an absolute disgrace, to say the least.

The church is meant to represent the best in humanity. But the Bishop Franco case has done the opposite so far. (Photo: Reuters)

Now to the second question: whose servant is this priest? Certainly not of Jesus Christ. That much is certain. He is a slave of the church. And today, there appears to be a contradiction — an incompatibility — between serving the church and serving Jesus Christ.

As to the third question, the church — by which we mean, in this context, the priestly hierarchy, with bishops as monarchs — today exists mostly for itself. The people could go to hell — or hell could come to them, as they please. Their only entitlement apparently is to be used like tools to serve the interests of the priestly class.

This is what I call practical atheism — Jesus is affirmed with lips but denied by deeds. As Dostoevsky’s Grand Inquisitor says bluntly to Jesus Christ, ‘It is not you we serve, but Satan”. Jesus is a huge inconvenience for the established church. This was the one insight, by the way, that Tolstoy endorsed wholeheartedly.

But there are silver linings even on this, the darkest of all clouds. The good thing is that the people of Sister Lucy’s church stood steadfastly by her. They stood by the truth, even as the priest — who pretends to be their shepherd — apparently lied through his teeth about them!