What is the truth behind alleged Sikh radicalisation?

Leeds study flies in the face of Modi and Amarinder governments.

Punjab chief minister Amarinder Singh and the Modi government share a common understanding that a number of diasporic Sikhs pose a threat to peace in the heartland of the faith back home.

In 2015, media reports, characteristically attributed to unnamed sources, referred to a so-called dossier that the prime minister planned to deliver to his then British counterpart David Cameron to inform him what New Delhi presumed he wasn't aware of.

As it routinely happens with select leaks from our elite IFS officials ahead of bilateral summit meetings, these reports typified India's complaints to member-nations of the UN Security Council about people of Indian descent or about activities of our enemy neighbour, Pakistan.

What's bewildering though was the mention of young British Sikhs being given bomb-making training as part of what the reported dossier claimed was a radicalisation drive by supporters of Khalistan in the UK.

In a post-9/11 world, such news reports, issued strategically by policymakers, can spell a catastrophe for the global reputation of communities of colour identifiable with their distinct religious symbols.

Still, they continue to originate from the large briefing halls of our IFS and intelligence nobility.

Fast forward to 2017, similar accusations echoed this time out of Chandigarh, the seat of power in Punjab. 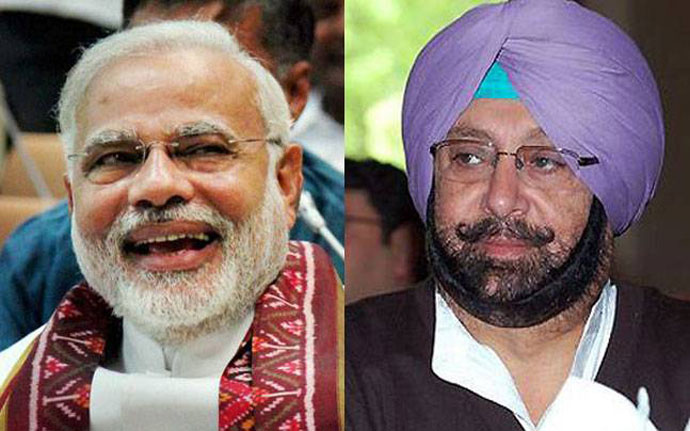 The question for Punjab CM Amarinder Singh and Prime Minister Narendra Modi is: Isn't the West far more alert to fundamentalism than we are?

"Definitely, attempts are being made, mostly from foreign soils, to destabilise Punjab and our country. Indications of this had started emerging a long time ago, with several leads suggesting that radical forces were out to destroy the state's peace and harmony, in nexus with criminal gangs," a report quoted Capt Amarinder Singh as claiming.

ISI operatives, he insisted, were working not only from Pakistani soil, but also from other countries, including the UK, Canada and Italy "to fan communal unrest".

Undoubtedly, India has witnessed far more insurgencies than probably any other democracy has.

But it's also true that several of them gradually fell flat before the might of the Indian state.

The so-called Khalistani movement was one of them. I use the term "so-called" on purpose because I am not sure whether Akali morchas during the Emergency and demands for river-water rights were ever a separatist agitation. They weren't at least when it all began in the 1970s.

But when the unrest rapidly transformed into armed militancy, it took a heavy toll not only on Punjab but outside as well. Both militants on the one side and the police and paramilitaries on the other stood accused of gross human rights violations.

The bloody trouble wounded the psyche of the Sikhs and Hindus of Punjab. The insurgency was eventually crushed with an iron fist, officially in the early 1990s.

A handful of proponents of Khalistan have been reduced to a fringe in the state's political space. Punjab's new generations are extraordinarily aspirational — and not because they want to hobnob with scraps of Khalistan, a dead movement. Photo: Reuters

In the entire North Indian region, Punjab now perhaps ranks on the top when it comes to immigration to the developed world. That's largely because its new generations are extraordinarily aspirational - and not because they want to hobnob with scraps of a dead movement.

But it's more than intriguing to spot officials and leaders in commanding positions to invoke the bogey of Khalistan, which has now been turned into a synonym for "Sikh terror".

The Supreme Court showed the way long back when it dealt with sedition charges over Khalistani slogans. But successive governments and vested political interests have consistently refused to see it.

In 1995, the top court noted that police had exhibited a "lack of maturity and more of sensitivity" when they arrested a pair for shouting "Khalistan Zindabad" and "Raj Karega Khalsa" in the aftermath of assassination of then prime minister Indira Gandhi in 1984.

"In situations like that, over-sensitiveness sometimes is counter-productive and can result in inviting trouble," the bench ruled. "Raising of some lonesome slogans, a couple of times by two individuals, without anything more, did not constitute any threat to the government of India… (nor) could (it) give rise to feelings of enmity or hatred among different communities..." it observed. Capt Singh's rants against diasporic Sikhs coincide with the findings of a well-researched study carried out by a prestigious British university. Photo: Reuters

Our country's political climate has become far more aggressive than before.

You speak about a terror threat - presumed, perceived, real or manufactured - it immediately grabs media attention, more so if you hold a constitutional office.

You speak about it - without explaining its scale and depth - you are up on national airwaves in no time.

In this climate, any talk about human rights has unfortunately become an anathema. Under oath themselves to protect democracy, a number of elected leaders have coined new definitions of patriotism. Distinctions between nationalism and majoritarianism have evaporated.

It's much easier than ever before to tar anyone as anti-national. Just brand him a "sympathiser" of an outlawed group or ideology on TV and he's gone forever, behind the bars or ostracised socially. It will take forever for his defence to prove innocence.

Recently, Punjab's chief minister has claimed "major success" over what's been described as "targeted killings" of Hindu leaders in the Sikh-majority state.

Violence, in the first place, is unacceptable in any civilised society. It must be investigated impartially and without prejudice.

Capt Singh attributed the murders to what he called was a bigger plot to resurrect religious hatred in Punjab.

The Punjab CM, at the same time, has been pressing hard for the passage of a stringent law giving greater powers to security forces in dealing with criminals, organised gangs and "radical" forces.

He has been repeatedly accusing "radical Sikh elements" in countries like Canada and the UK of attempts to foment trouble in the state while advocating the proposed Punjab Control of Organised Crime Act (PCOCA).

But Capt Singh's rants against diasporic Sikhs coincide with the findings of a well-researched study carried out by a prestigious British university.

It was developed in November, 2015 to examine the notion of "Sikh radicalisation in Britain" after news reports, ascribed to Indian officials, surfaced ahead of PM Modi's London visit.

The report prepared by the University of Leeds presents the results of a project funded by Britain's Centre for Research and Evidence on Security Threats (CREST).

"Sikhs," the study noted, "have most frequently been labelled as 'extremists', 'fanatics', 'militants', 'fundamentalists' and 'radicals' in both British and Indian media when campaigning against the state (in particular against the British colonial and Indian postcolonial state)."

But the Leeds research found no evidence - or rather substance - in allegations or complaints of the Modi administration circulated widely in public domain."Sikh institutions, organisations and individuals in Britain are regularly reported in Indian media as funding Khalistani organisations in India, although the exact nature of these reported links remains unclear," the research found.

The study emphasised that Sikh campaigns in the UK were largely focused on "religious enforcement" - internal affairs of the brotherhood and issues related to the autonomy of the Akal Takht, the highest seat of the religion's temporal authority.

"Much Sikh activism in Britain actually contributes positively to the integration agenda, particularly in the form of humanitarian relief provided during disasters and incidents where members of the public require support," the report concluded.

Capt Singh and champions of majoritarian politics in New Delhi can always reject this research; they most likely will, saying it is authored by a foreign university.

But the question is why the UK, Canada, Italy and the United States see nothing untoward in their minority populations of Indian origin.

If a large number of diasporic Sikhs are involved in economic offences, illegal funding and widespread links with Pakistani rogues, as it is made out to be in New Delhi and Chandigarh, wouldn't they be caught and prosecuted firmly then and there?

After all, ISI villains are on the radar of the entire international community. Aren't they?

And let's not forget, those countries in the West are far more alert to fundamentalism - as well as to violations of human rights - than we are.

#Modi government, #Captain Amarinder Singh, #Punjab, #Khalistan
The views and opinions expressed in this article are those of the authors and do not necessarily reflect the official policy or position of DailyO.in or the India Today Group. The writers are solely responsible for any claims arising out of the contents of this article.