Left has failed because brand Modi has won young India over

The BJP today talks in multiple voices, borrows both from the Left and the Right.

The post-poll statue vandalism has affirmed that this Tripura elections was not just another electoral battle, but a remarkable crossroad in the war between the Left and Right in India.

From the arrest of JNU’s Kanhaiya Kumar to Kerala’s cycle of annihilation and the recent demolition of Lenin's statue, both the ideological extremes are struggling to establish their hegemony over the society. In our first-past-the-post electoral system, the mathematics of winning seats results from little swings in vote shares, and a critical swing of only 3 per cent to 4 per cent that changes the game altogether, even in a large-sized state. 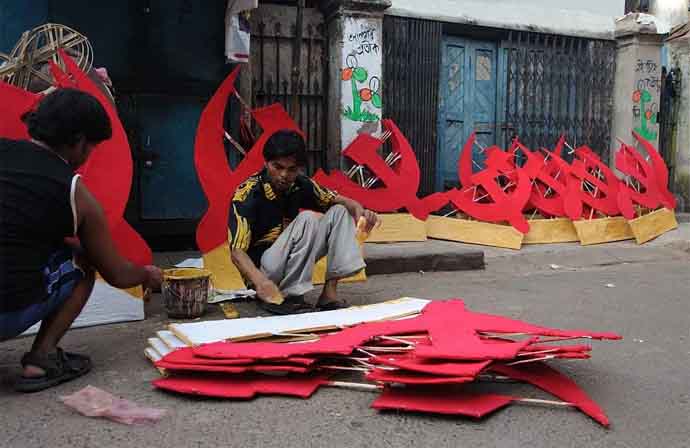 Tripura is a very small state and going by the vote shares of the past Assembly elections, the BJP needed roughly 1.3 lakh more votes statewide to cross the Left Front. In an Assembly of 60 constituencies and 3,041 polling booths, this translates to 2000 votes per constituency and 40 votes per booth. The vote share of the Left in Tripura has reduced little but critically from 48 per cent to 45 per cent from the last Assembly elections of 2013. The anti-Left vote share has consolidated impeccably at the cost of the Congress. Arguably, considering high anti-incumbency of 25 years, it’s less of a Left’s defeat and more of a BJP victory. Amid the predictable realignment from the Congress to the BJP that the country has been witnessing for quite some time, one significant feature underlying the BJP’s magnificent victory is its power to lure the young voters, particularly the lure of brand Modi.

Nearly 47,000 new voters voted this time, which accounted for 15 votes per booth. Pulling these votes certainly gave an edge to the BJP. According to the 2011 Census, Tripura had a population of 7,31,006 aged between 15 and 25 years. By now, most of them have been working or entered into the potential workforce in a state where unemployment is highest at 25 per cent.  This vulnerable constituency gave BJP the needed swing. Their count of 240 per booth was flawlessly targeted by Modi-Shah and they ended on an average of 115 votes ahead of the Left per seat.

It’s wiser to understand the appetite of India’s youth to which the BJP is catering to so successfully. Various reasons have been given by social commentators, like the young wants to experiment with something new that’s unknown to them, etc. How much of this amusement is manufactured by corporate poll-finance is a separate debate altogether. Until 2011 Census, 19.7 per cent of India and 21 per cent of Tripura’s population were aged between 15 to 24 years. The failure of Left to capture the imagination of our youths and instead by Modi is not specific to Tripura only. It is happening nationwide from 2013, when Modi was announced the prime ministerial candidate. Why is the Left consistently failing to synchronise with the future India? The answer lies in the economic and social reasons behind it, which are not wholly separable.

Brand Modi has convincingly won over young India’s aspiration. But this Modi brand is not RSS, and our youth is not very conservative. Modi is the urban-developmental face of BJP’s two-dimensional plank of Vikas and Hindutva. The youth still continues to give Modi’s appeal a chance, even at the cost of compromising with religious intolerance.

Paradoxically, it’s happening at a time when the unemployment and economic record of Modi’s four-year regime is dismal.

But what made the youth support base of Modi still remain intact? In Tripura, one must realise, that the unemployment scenario was no better anyway, and by giving Modi a chance the youth had nothing more to lose. Whatever can be achieved will be a gain, and this gamble attuned the job-seeking minds very well.

During the 2014 elections campaign, the BJP was chanting the "trickle down" narrative, that robed its economic plank with a market-friendly conviction to pitch against UPA’s policies of "inclusive growth". Right-wing economist Jagdish Bhagwati attacking Amartya Sen was a bitter memory, where Sen was understood as the mind behind UPA’s credible welfare schemes. After coming to power, the BJP was quick to drop its anti-welfare rhetoric without harming its market-friendly image. Juxtaposing with the BJP, neither the CPM could burst the balloon of  the "Gujarat model", nor could they offer any Bengal or Tripura model where they ruled for 34 and 25 years respectively.

The BJP today talks in multiple voices, borrows both from the Left and the Right. It plays all shades of cards, as and when required, both overtly and covertly. The Left is lagging far behind to compete with such a shrewd rival today.

The CPM never projected Tripura’s legendary icon Manik Sarkar in the national fore. When they finally attempted to undo the grievous negligence of industrialisation in Bengal, they went on with such haste and callousness, that their government fell as spectacularly as it had once rose. The neo-middle class who gave thumping support to Buddhadeb Bhattacharya’s industrial policies in 2004 and 2006 elections, rejected the inefficient CPM for being "good for nothing", and instead embraced the BJP from 2014 elections onwards. Many social indicators of Left-ruled Bengal were worse than the neighboring BJP-ruled Chhattisgarh. In 2014, Modi-Shah’s BJP could begin with a hollow yet convincing "Gujarat model" to showcase, vis-à-vis the factory skeleton of Tata Motors at Singur.

Urbanisation and media density has spread vastly in post-globalized India, and so has the social media. The urban population increased from 17 per cent to 26 per cent between 2001 and 2011 in Tripura. Around 9 per cent of the population migrated to urban and semi-urban areas, especially in south Tripura. Even the youths living in rural areas can have a glimpse of the world today in this age of virtual connectivity. Aspiration has soared by leaps and bounds. After acquiring decent education and getting to know the world much more than before, no young heart wants to take up farming like their father, and neither is farming affordable like before.

Agricultural workers are a shrinking constituency today, and most agricultural people are unskilled for industrial and service sector jobs. A large chunk of this population belongs to the previous generation and they as parents do not want their children to go back to villages and take up farming. Remaining urban poor is preferable to them than becoming farmers again.

What long-term alternate economic trajectory does the Left has to offer them today without accumulating capital and expanding the economic pie?

The success of Tripura’s Left-economics lies, indicatively, in its high literacy rates and affordable public health, while its failures hide behind high unemployment rate, and poor industrial infrastructure. This contrast is true for most social indicators versus most market indicators. This picture is largely similar for Kerala and once Left-ruled Bengal too. The Kerala model is also high on social development, but job-generation is a concern. If land reform was a revolutionary achievement of Jyoti Basu, de-industrialisation was his "historic blunder". Looking at the economic history of Left-ruled states, a pattern develops which helps us to understand the fallacy of Left’s economic directions, vis-à-vis the youth’s channel of ambition.

The Left itself has dug its path of exit, by performing credibly in social development, but refusing to take the logical next step of facilitating capital accumulation and increasing per capita income. In today’s Tripura, violence is a thing of the past and a healthy educated young force churns for affluence. An educated youth naturally leads to a more aspirating society. The credit for both this success and failure goes to the Left, and its dogmatic path has hit the dead end.  It has decapitated in its own "karma".

In the decades of 1940s to 1980s, Left was the default channel of youthful dreams and idealism worldwide. In present-day, it’s just the opposite. While the Left in the West has recently experienced youth-resurgence through leaders like Sanders and Corbyn, the fate of the parliamentary Left in India grows even darker. Today’s millennials are products of globalisation, leading technology-driven lifestyle. The post-truth world has little space for idealism and justice, and today’s young yearns for urban affluence. One may blame it on neo-liberal world that nurtures such uncharitable dreams, but the fact remains that Left has failed to resonate their thirst.

The answer doesn’t lie in a cosmetic change like propping up a younger face. The crux of the matter is, Indian Left has failed to create any pragmatic alternate economic model. Blaming the corporate funding of electoral machines and a biased national media against them will only be a partial truth. The story of failed economics is not a chronicle of Left in India, but of the communists worldwide.

The Indian Left’s focus has mostly been the dogmatic central planning of Soviet style, and little did they open up to successful social democratic experiences like the Nordic countries in Europe. Their leadership has long been living in a limbo, refusing any space for new economic thinking and experimenting with capital.

Added to the absence of a pragmatic economic alternative, other qualitative factors have also played the young minds. In the age of free information flow, repressive stories of Soviet regime have lost much of Left’s historic appeal. Their bureaucratic hierarchy is discordant with the vibrancy of a plural polity and the organisational flexibility needed to work within a multiparty framework.

Indian parliamentary system is similar to the UK, and the Labor Party in UK came out of its descend by rapidly reforming its organisation through massive democratisation and openness. This was the key to the rise of the popular leader Jeromy Corbyn. But Indian communists still follow Lenin’s Democratic Centralism, which was temporarily suitable for a country that never saw any vibrant democracy.

Bookish debates over pre-historic documents make the Left look more like a self-righteous monk instead of a dynamic political leadership that can convince our youth, and make them dream.

Failure to catch up the rapidly evolving dynamics makes it a party of the past. Archaic outlook and insulated praxis have built an "anti-modern" perception among the youth.

By 2020, India is going to be the youngest country, with the median aged individual at 29 years and living in a city in all likelihood. Future of Left in India lies in the success of following a path of economic pragmatism and social liberalism, cultivating class consciousness in the collective ideas of justice, reinventing its appeal to the younger generation. All we can do is to wait, perhaps for a time machine, which can wake them up to the reality today, and make them realise the historical role of rescuing the idea if India.

Also read: Sharing memes and images of 30,000 farmers marching in Maharashtra can only achieve so much

#Brand Modi, #BJP, #Tripura, #Left
The views and opinions expressed in this article are those of the authors and do not necessarily reflect the official policy or position of DailyO.in or the India Today Group. The writers are solely responsible for any claims arising out of the contents of this article.

The author is a senior research fellow at Indian Statistical Institute, Kolkata.