Attack on Lenin, Periyar statues is a sign democracy is unsafe under BJP rule

India's history is like an ancient parchment manuscript that has been written, erased and rewritten, as has been the case with medieval manuscripts in the rest of Asia and large parts of Europe. Many a time, these manuscripts are overwritten to the extent that in takes years to recover the more ancient writings using modern techniques, with efforts that may last years.

Statues, too, are a depiction of history. The early medieval statues of Buddha in southeast Asia are a religious as well as political statement. Over centuries, these have been excavated, some very ancient, some medieval. The Vedas have been reconstructed over time. At times, like in Asoka's era, statues running into large numbers and other emblems like the chakra, were systematically destroyed by the later Sunga and Kushana dynasties, leaving relatively few remains.

Even the Bodhi tree, where Buddha attained divine wisdom, was cut down by a zealot after the ascetic's death. Other forces, including Hindu brahminical dynasties, were hostile to Buddha and Buddhists like Asoka. So history is clearly written and rewritten, including our ancient and medieval past, and the modern reconstruction may, in parts, be controversial. However, in modern times, this is not what happens - and not in the same degree. Apart from the Buddhist-era statues of Bamiyan destroyed by the Afghans, the Angkor Wat too has been destroyed in the much the same fashion by anti-Muslim idolators like the Khmer Rouge in their extremist and distorted Marxist rule. The Angkor Wat was later restored by Indian archaeologists. 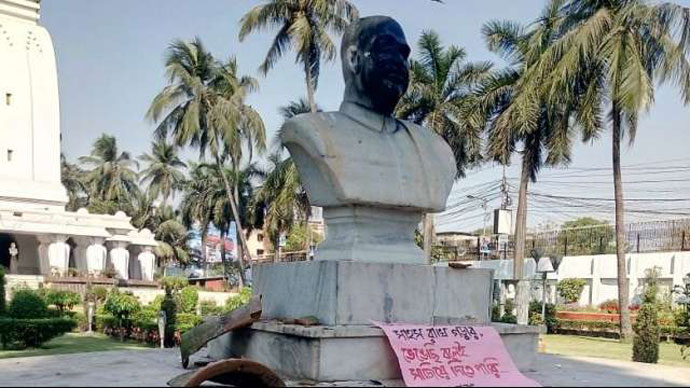 Statues are history too.

During the Ukraine civil war, hundreds of Lenin statues were destroyed. This is also true of East Europe, which, after its failed and distorted Marxist experiments, swung towards a strongly repressive neofascist direction, and rewrote its past.

India is not quite the same. It is both multi-cultural and multi-religious. It has ancient traditions as well as carefully preserved linkages from the medieval periods to the past. For example, the Bhakti saints: Kabir, Mirabai, Baba Fareed and a host of others, enriched their songs and poems, imbued with a medieval richness and the old syncretic tradition. As is well-known these songs are sung even today by people of all faiths and regions.

So how did angry stone pelters, earlier known as the breaker of idols, begin attacking the two Lenin statues and the Dasarath Deb college named after the renowned tribal and Left leader in Tripura. Owing to the vagaries of multi-cornered contests, the Left front, which got 44.90 per cent of the votes cast, it got only 16 Assembly seats.

On the other hand, the BJP got only 43 per cent of the votes, but as many as 35 Assembly seats. So the BJP victory was not by any means a sweep like the party has claimed, but due to its association with the larger of the two tribal coalitions. The collapse of the Congress to only 1.80 per cent of the vote share in the state where they earlier got over 30 per cent is an unmitigated disaster.

Even before the election began, the saffron brigade swelled, strengthened by the overall Sangh Parivar ranks. The Sangh proudly announced that it was sending cadres in the thousands to the northeastern state. As reports in the electronic media showed, the RSS cadre got hold of a bulldozer and toppled one Lenin statue, attacked another and assaulted many Left and rural villages and households. Governor Tathagata Ray abdicated his duty by not acting swiftly to stop the riots. In the most casual fashion, Ray said that the breaking of statues would be a democratic act, as any democratic party in the Opposition, could do the same.

For this statement, the president should have dismissed the governor under his emergent powers. The Union home minister, too, was late to respond. It is unacceptable that he stands by while Tripura burns. The fact that a bulldozer was already used while the police allowed it to happen and the governor abdicated his duty, show that this was no spontaneous reaction.

The saffron cadres, if ordered not to indulge in anti-social activities, could not have razed the statue to the ground. The RSS' crocodile tears can fool few.

But once you let the genie out of the bottle, you can't put it back in. It was clear from day one that there would be a backlash. Soon, a Periyar statue was damaged in Tamil Nadu. Since Periyar is a secular anti-caste legend, the fact that a major BJP leader allegedly welcomed the assault on the Periyar statue has further stoked tensions.

Then a couple of statues of Syama Prasad Mookerjee were splashed with ink and desecrated. Those who did this probably did not know that Mookerjee was a member of Nehru's cabinet after Independence, before he formed the Bhartiya Jana Sangh in 1951.

This must stop. We have enough troubles, including severe shortages in several vital sectors of the economy, to start tit-for-tat attacks on statues. Such assaults also instigate violence that is contrary to several traditions. The Tripura Left front ruled for 25 years with limited funds for a large part of their regime. The Left front should be respected for this very major success. The Sangh may try emulating this record, but not for long. The Lenin statue has been demolished, but not the Left.

Tragically, the celebrations in Tripura were for a victory that became pyrrhic owing to a very relaxed governor who did failed his duty, and a supine police and civil service. Elections are famously seen as a festival of democracy. Sadly, in the present case, the elections turned out to be an assertion of might is right. More than just the Lenin statue, democracy itself was assaulted in Tripura.