The story of Sukumari the Crocodile, who couldn't turn back into a woman

You turn to stories when your reality resembles dystopia. Nothing hits home more these days than that idea of dystopia, which is a reality all of us are now living in.

Sukumari had a unique capability. She could shift form. A human, to a crocodile, and back to a human. The secret behind this unique skill were two jugs of water. Both had a spell cast on them. Sprinkling water from one jug could make her turn into a crocodile, and when she wanted to get back to her human form, her son had to sprinkle water from the other jar on her. That's all. Simple life.

One day, Sukumari's son sprinkled water on her and she turned into a crocodile. Somewhere in between, right before she went off into the water, her strong tail knocked the other jar off. The jar which held the water that could bring her back to her human form.

Her son kept crying. Every day, he went to that spot, near the river, where Sukumari the crocodile came to see him. From a distance. She could never return to her human form, to her son.

I grew up with the story of Sukumari. It was a tragic story, reserved for days when a catharsis was necessary. I cried for hours after our story-telling session was over.

In our three-room quarter — Quarter No 7 — the drawing room doubled up as my grandmother's room. She had a calendar next to her head. It always had to be of Adya Ma. A form of Goddess Kali. In my home where women outnumbered the men and outdid them in grit, Kali was but the logical choice. There was no place for weaker gods.

My grandmother's room had two beds parallel to each other. She sat on one every evening. My sister and I sat on the other. Some days, if my cousin would be back from his tuition earlier than usual, he too would sit with us. This one hour, no one disturbed us. It was storytime. Didun had the task of keeping us engaged so that the rest of the people in the house could catch a breath. We would wait all day for Didun's stories. In the evening, we would place our demands in front of her. On particularly sad days, I asked for the story of Sukumari.

That story had a strange pull. It drew me in. Even though I had heard it multiple times and knew the exact points Didun would pause for breath or effect, where her voice would rise, where it would grow wistful... it still was my favourite story. 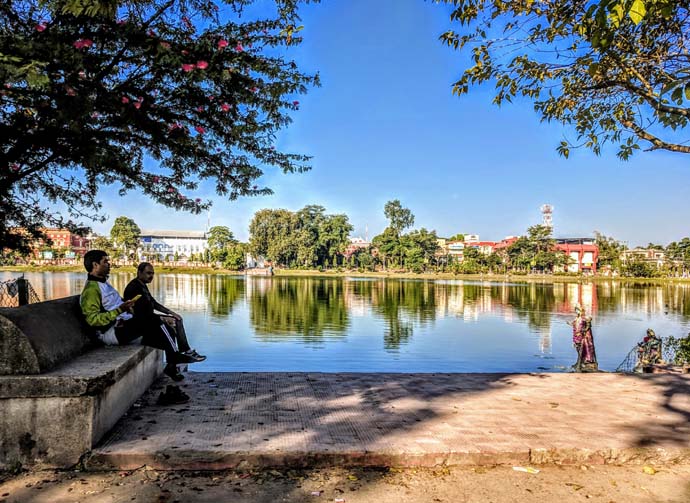 Every day, the son went to that spot, near the river, where Sukumari the crocodile came to see him. (Photo: Author)

They say you turn to stories when your reality resembles dystopia. Nothing hits home more these days than that idea of dystopia, which is a reality all of us are now living in. Stuck inside our homes, we have but stories to fall back on. Our Netflix and Hotstar accounts try their best to keep us from breaking down in this phase, but it is the stories we miss.

I tried looking for the story of Sukumari on the internet for hours last night. There wasn't any. Maybe she wasn't even called Sukumari. Maybe it was just a name my grandmother concocted out of thin air one evening, to keep her grandkids engaged. The stories are passed on. Across generations. But in our two-room, big-city, always-busy lives, there simply is no time to accommodate those stories anymore.

Our Thakumas, when they leave, take their jhulis along. No one has the time to tell stories anymore. No one listens to stories anymore. The Peppa Pigs and Chhota Bheems are not quite the answer to Grandma's Tales. They never can be.

I was four or five years old when we moved out of the joint family and went to our 'new' house. It was in a different locality, which, back in Bengal, we call 'para'. We were growing up, the family was growing, and three rooms were no longer enough for nine people. Didun did not want to leave that home. But my father left Quarter No 7 and moved to this new house on one condition: he would visit Didun every day.

So on his Hero bicycle, he got a child's seat fixed. I had my own footrests too. They could even be folded in when not in use! Every evening, I would wait for my dad to come home after his office and other work. 8 pm, 9 pm, 10 pm... it didn't matter how late it got. Going to 'Oi-bari' (That Home) was routine. I would go, and listen to the story of Sukumari.

It never quite struck me that in the tussle between home, office, seeing a joint family break, my Didun too had become Sukumari. She would see her son from a distance, come and stay with us once in a while, but it wasn't natural anymore. It wasn't her home. She no longer belonged on land, in this para. Even the few times that she came to stay with us, her mind stayed back at Oi-bari.

A few years later, on a cold January evening, Didun left us. My father stopped going anywhere near the lane that that nursing home was situated in. The tradition of going to Oi-bari every night continued for a while. He took me along on those days too, on that tiny seat, my seat, my feet on that footrest. I went and sat on the other bed. Waiting for Didun to start her story, any moment now. But our Sukumari was gone. Never to return.