Nitish-Modi reunion: The storm that sank the 'secular ship' is not over yet

The "secular alliance" in Indian politics is in deep waters. While it was gasping for life ever since the landslide victory of the BJP in Uttar Pradesh Assembly elections, the recent developments in Bihar have washed away all hopes of its survival. Or, so it seems for now.

This is what the Nitish Kumar-Lalu Yadav break-up in Bihar means. Or to be precise, the NaMo-Nitish patch-up.

The "secular" plank that until some time back served as a glue for politicians of all kinds - the ones with serious corruption charges, those clashing over Muslim-Yadav or Muslim-Dalit vote banks, the secretively "Azad Kashmir" supporters, the torchbearers of blatant minority appeasement - seems to be drowning fast and those clinging on to it are finding it hard to stay afloat.

When Nitish decided to ditch Lalu, it was the beginning of a sea change in Indian politics, leaving the opposition free to cry hoarse over allegations of manipulation.

The opposition parties are also free to make allegations of EVM foul play against the BJP, but the hard truth is that this attempt to make a "virtue out of losing" by calling the BJP communal and manipulative has exposed sheer ineffectiveness. 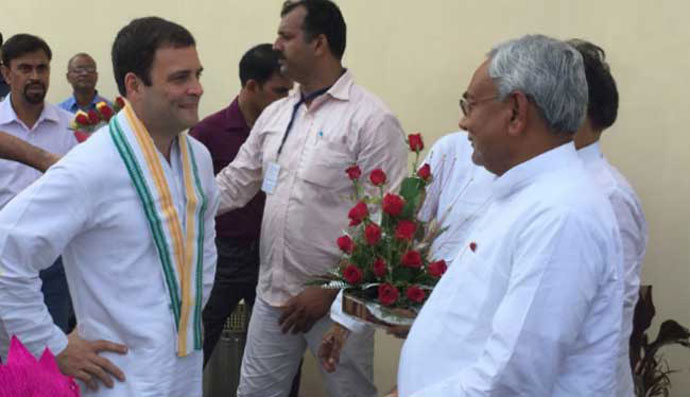 If Rahul Gandhi is the leader the opposition is counting on, Modi has nothing to fear.

The Narendra Modi-Amit Shah strategy actually manages to catch them off guard every time - from Goa to Bihar.

Instead of calling Nitish as "Kursi Kumar", the opposition parties should first take a look within to find out the reason behind such disasters.

Why did the much-praised Bihar formula against Modi failed so miserably? Why did the mahagathbandhan (grand alliance) break?

Rahul Gandhi - the cause of all 'miseries'

It's strange how the dynasty-loving Congress fail to see what everybody else could. If Rahul Gandhi is the leader they are counting on, Modi has nothing to fear.

For the rest of us, we end up living in a democracy with an incapable opposition. It doesn't bode well for a democracy that leaders resign only on legal or moral grounds? Grounds of incapability, anyone? Is it not time for a Rahul-mukt Congress?

Do a small survey. How many people in this country will vote for Rahul Gandhi as PM. The Congress should ask this simple question to itself and will get an answer to the problem.

This is indeed a serious situation. We have a ruling party that came to power (at the Centre) with a huge, huge mandate but is still on the prowl. On the other hand, the opposition still stands divided with little hopes of giving the BJP a tough fight.

Calling Nitish an opportunist or the BJP as communal will not make a leader out of Rahul Gandhi. His lame "mujhe-pata-tha-yeh-hone-wala-hai" doesn't exactly inspire confidence in his partymen or allies.

Desperate to pass his political legacy to his sons, Lalu is forced to see the ghosts of his past coming back to haunt the sons. Running between Patna and Ranchi (for fodder scam hearings), he knows the battle is fast slipping from his hands. He and all political leaders must know that corruption is an iceberg that eventually sinks any Titanic.

Samajwadi Party supremo Mulayam Singh Yadav is in no better position. From a "selfie-with-Modi" fascination (of his family members during a marriage ceremony) to the SP's wavering stance on the Modi government, history has shown that he is unreliable and a perpetually malleable enemy.

Mamata Banerjee, the torchbearer of blatant minority appeasement with added vengeance to teach anyone who speaks against her a lesson, is actually fuelling a very dangerous situation in West Bengal where riots erupt over Facebook posts while the police play mute spectators.

While impulse continues to cloud her decisions, her special attention to the 27 per cent minority vote bank makes her an easy target of the BJP.

The BJP is happy, meanwhile, couldn't be happier - one more state in its kitty without even fighting an election or winning it.

A friend-turned-foe-turned-friend of NaMo, Nitish has re-emerged as a man who won't compromise on corruption.

The BJP, on the other hand, has its eyes set beyond Bihar.

The party looks unstoppable now. The latest chain of events has not just led to the ouster of Tejashwi Yadav (read Lalu Yadav), it also means an ouster of sorts for anti-corruption crusader-turned-Delhi CM Arvind Kejriwal.

With such a strong stand (as resignation from the CM post) in response to allegations of corruption against his deputy chief minister, Nitish has emerged as the new anti-corruption "mascot".

This is definitely bigger than what meets the eye. The storm that sank the "secular ship", according to me, is not over yet.