These slogans bond us in slight comforts and fail to encourage thoughtful introspection over violence.

Thursday (November 2), I biked to a concert in Manhattan from my home in Brooklyn. Directions called for crossing lower Manhattan and turning onto the West Side highway bike path. As I crossed the busy street running along the bike path, I noticed flowers and police. It was a makeshift memorial where one of the victims of the Manhattan truck attack on October 31 was killed. I didn't realise I would pass by it on my ride. Now it was populated by tragedy gawkers, journalists filing news pieces, and members of Billy Graham Ministries in yellow jackets.

I took a moment to get off my bike and wander around. The scene had an air of solemness. I'd been riding topless, and I put on my shirt before approaching. Some folks bowed their heads. Others joined hands in prayer. Yet, New York being what it is, even in this space of reflection, the sounds of the city were overwhelming. Buses and cars zoomed by, and the path itself was full with its usual mix of joggers and cyclists.

I found comfort in the city's fast-paced rhythm persisting like normal alongside this place of tragedy. It's the same comfort I felt watching a video of the Halloween parade held the night of the attack. If the point of these attacks is to cause fear and hysteria, there is no better response than normalcy.

And that's precisely why I've never quite felt comfortable with proclamations of "Boston Strong" or "New York Strong". Obviously, these events are shocking for members of the city, and people often feel a need to unify after shared trauma. But, these slogans bond us in slight comforts. They don't encourage thoughtful introspection. They let us feel good without having to think critically. 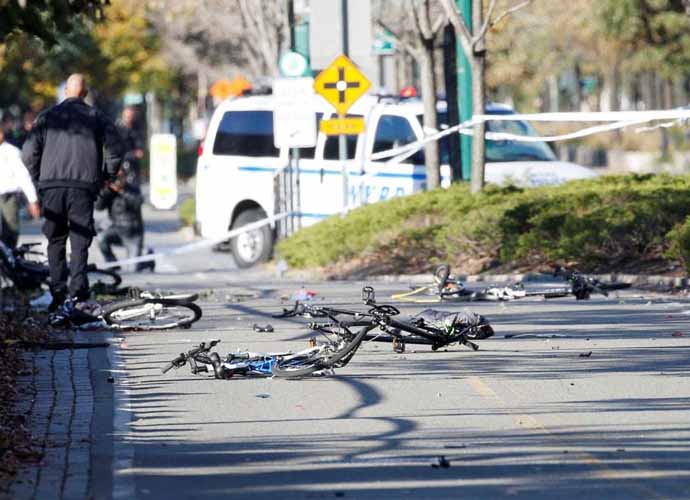 If someone can say "Las Vegas Strong," but not have the strength to think critically about changing the nation's gun laws, then the posture of strength is meaningless. Moreover, nothing projects weakness more than puffing out your chest. It's the smallest dogs who bark the loudest, and stoicism has its own power. It is far more intimidating. If you hit someone and they respond that they will kick your ass, that's worrisome. If you hit someone and they simply ignore it as if it never happened, that's terrifying. It seems a reflection of American exceptionalism that we need to call a city strong for enduring the senseless violence, explosions, and killings that many other areas of the world endure on a far more regular basis.

Our Dear Leader himself tweeted the words NYCStrong and given his fetishisation of strength, it's not surprising Donald Trump's response for the attack included calling for death penalty. He used capital letters in his tweet, writing them just so we know that HE REALLY MEANS IT.

This is not shocking. This is the same man who took out a full page ad in the New York Times calling for the execution of the Central Park Five, five men of colour wrongly convicted of raping a woman in Central Park. In fact, even though they have been exonerated and released from prison, last year, while campaigning, Trump insisted on his belief in their guilt. If he feels no regret about calling for the death of innocents, we should not doubt his sincerity to seek death for someone whose guilt isn't in doubt.

Trump relishes the brute force that comes with the job, perhaps the only part he truly embraces happily. The man has called the White House a dump, has spent endless weekends at his golf clubs, and does a poor job at actively campaigning for his policies. He does not relish the hard work that comes with the job. But he loves the power and military might. He embraces the role of commander-in-chief far more readily than the part of the defender of the constitution. He threatens nuclear war with no concern for the consequences, and he wants to bring back military parades.

Perhaps, I would be more comfortable with declarations of strength if we accepted broader definitions. Strength shouldn't only be defined by threats of force. If we define strength as the ability to achieve ones goals, then diplomacy is also strength. Finding consensus is power. Unfortunately, the current American government is one that sees all treaties as zero-sum games and can rarely ignore the taunts of a foreign government.

I recently completed watching the new 18-hour documentary series on the Vietnam War by Ken Burns and Lynn Novick. Then too, some people thought anything less than full-scare war signals weakness and encourages American enemies. This thoughtless portrayal of strength is one that blinded the country to its own failures and let a war drag for decades with millions of deaths. As Trump continues to openly threaten war with North Korea, we should be more judicious about how the versions of strength we use.

In the wake of the attack, Trump postured strength by immediately taking to Twitter and calling for a change in America's immigration laws, getting rid of diversity visas. If you ask me, strength is the diversity I encounter each day in New York. Although I've lived here for several years, I still find myself amazed by the remarkably colourful tapestry of life I see here each day.

Sometimes, crossing one of New York's bridges on bike, I marvel at the crowded, cluttered sky line. It feels a miracle that New York forces eight million people to share the same sandbox and that most days it seems to work. We've crammed just about all the world's religions, languages, and cultures into one small space, and yet we don't tear each other apart. That's astonishing. And strong.

Post your comment
#Nuclear War, #Donald Trump, #Manhattan Truck Attack
The views and opinions expressed in this article are those of the authors and do not necessarily reflect the official policy or position of DailyO.in or the India Today Group. The writers are solely responsible for any claims arising out of the contents of this article.