#MeToo: How far can we separate professional genius from personal actions

How far can we separate a person's professional talents from their personal actions?

This is a question that has haunted academics and public intellectuals since time immemorial. It has even been visited by Shakespeare in the famous speech by Mark Antony following Julius Caesar’s murder on the steps of the Roman Senate — “The evil that men do lives after them; the good is oft interred with their bones.”

Shakespeare was saying that those who have done evil deeds often tend to be remembered by them, and not the good that they have done.

Public memory is, of course, selective. Much depends on the optics a generation or generations sees through.

Those optics are decided by the times and norms we live in — social, economic and historical contexts, and so much of these contexts — that give rise to war and devastation, inhuman horrors of racism and casteism, sexism and misogyny — have also produced great works of art surrounding them, not always as protest against the mores of those times, but also an affirmation of them.

What does one do about them in these “woke” times? 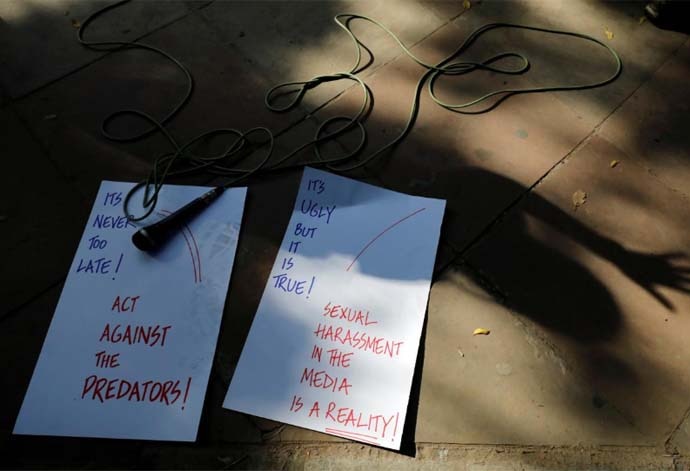 A microphone and placards on the pavement as Indian journalists attend a protest against sexual harassment in the workplace in New Delhi. (Credit: Reuters Photo)

How does one deny, for instance, the works of Leni Riefensthel, the filmmaker who produced such films as Triumph of The Will and Olympia were undoubtedly great films by any standard of filmcraft. What does one do about Bankim Chandra Chatterjee’s Anandamath with its distinct Hindu bias, that the current BJP leadership eagerly appropriates?

Shortly after the publication in October 2017 of two exposés detailing decades of sexual abuse and assault by the US film producer Harvey Weinstein, the #MeToo movement hit the art world. In January 2018, the National Gallery of Art in Washington cancelled a Chuck Close exhibition, planned for May, because of accusations of sexual misconduct that had engulfed the artist in controversy.

Nobuyoshi Araki is a Japanese photographer whose explicit works often depict women in bondage. In August 2018, the Museum of Sex in New York was organising a solo show of his when the curatorial team learnt of allegations of sexual misconduct against him by a former model. The organisers decided to add her story to the show after she went public in a blog post, and installed an interactive tablet with Kaori’s full post in Japanese and English in the gallery in May.

On December 3, 2017, a Brooklyn-based artist, Jaishri Abichandani, organised a protest at the museum with about 30 people, in front of the Met Breur building in New York City for what she described as a “feminist participatory public performance” in response to the retrospective of celebrated late photographer Raghubir Singh taking place inside.

She accused the deceased artist of sexually assaulting her back in 1995 when she worked with him as an assistant in India. This presented a quandary to both the Metropolitan Museum of Art and the ROM (Royal Ontario Museum), where the museum was scheduled next . 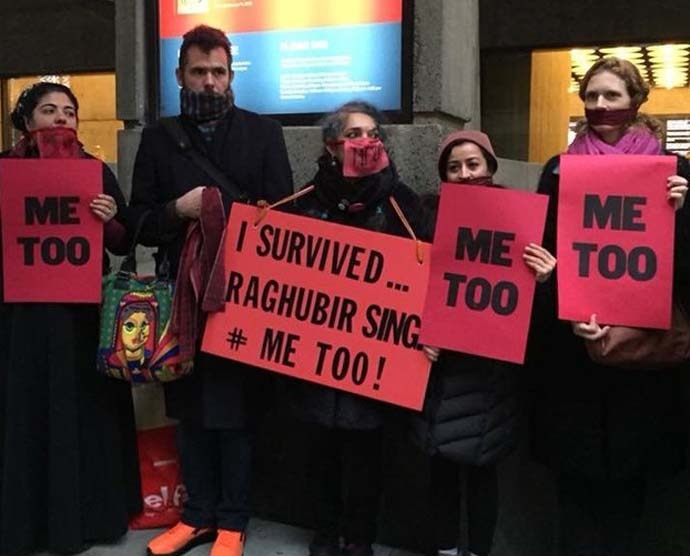 Now, rather than attach a label to Raghubir Singh’s work that highpoints the accusation or removing the exhibition entirely — which is standard practice in dealing with problematic artists or artworks — the ROM has mounted a related display addressing issues of power dynamics, sexual misconduct and gender inequity in the arts.

This has been done with Jaishri and an advisory council of experts in the city’s arts, cultural and advocacy communities. Free to the public #MeToo And The Arts focuses on how museums have been handling these issues in the wake of the #MeToo and Time’s Up movements, which have called for an end to sexual harassment and assault following a number of allegations against high-profile men in the film industry.

Viewing the work of artists accused of sexual misconduct from the lens of #MeToo is no different from viewing the achievements of individuals in other fields in the same way.

This is perhaps what prompted Tavleen Singh to tweet about former journalist and now former MoS External Affairs, MJ Akbar, who has been in the eye of the storm in India with multiple allegations of molestation against him during his journalism days.

Her tweet that makes a plea about separating the individual from his achievements has not gone down well on social media. Akbar was, after all a celebrated journalist and author with several outstanding books to his credit, and the founder editor of The Telegraph, which during the first two years of its birth crossed the sales figures of The Statesman, the most formidable and established newspaper of its times. The logic of refusing to engage with a person’s work or conflating it with his personal conduct is a slippery slope. Such a moral compass would have to exclude a vast number of accomplished individuals from the ancient to the modern world and possibly leave us with only a handful of “perfect” individuals.

Beginning with the ancient Greek philosophers and dramatists, many of them who were definitely pederasts, and gathering a horde of famous artists and composers of the middle ages and the Renaissance along the way, by the time we come to the marred geniuses of the 20th and 21st centuries we will have practically pushed ourselves into a cave with bare walls. 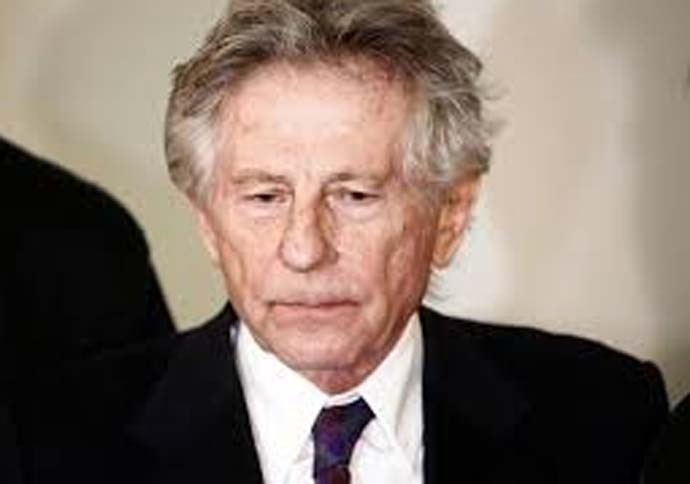 Summing up the popular sentiment, a prominent PR professional says:

“I was really conflicted on Woody Allen movies - I might watch them but I will remember him as a predator. And I will always say he makes great movies but he is a predator, a sexual predator who makes women feel unsafe and commoditised. Our arts and talent and our performance in organisation setups (same logic) can’t absolve us, exclude us, make an elitist layer not responsible for what is a very fundamental ask. Keeping another human being safe in our company. What comes first in organizations? Conduct or performance? If that answer is conduct, then how can this answer be different. I will respect a publishing house or a production company that will come back and say won’t publish a predator.” 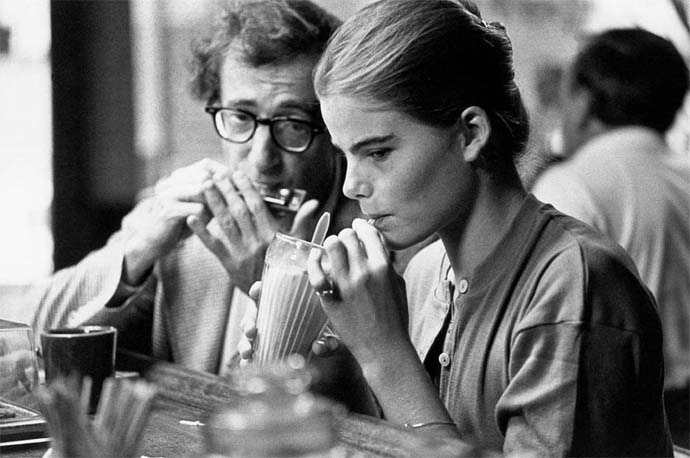 One can perhaps arrive at answers in certain cases. Those are the cases where the outcome is connected to the process where the character of a person is intimately connected to his/her results. A head of nation for instance should be a moral and ethical role model and so should a teacher.

But a Wagner or a Mozart’s personal life has nothing to do with his work which exists on a separate plane altogether.

Feelings and emotions come from places more elemental than thought. When we say we won’t read an author’s book because he has “loose” character or, even more bizarrely, change our minds about his book, which we loved before the sordid revelations about him came out, and now think it is pretty awful in retrospect, we are not diving into a deep pool of ethics, we are splashing about in the waters of moral outrage.

The cacophony of social media today has made the transmission of our virtue more important than our critical ability to see and analyse works on their own merit.

It is not possible to evaluate an accomplishment, through the pitchforks and blazing torches of moral opprobrium, but only through the critical tools provided by its own genre, be it a game of cricket, a movie or a book.