When you lose the freedom of faith, the right to your roots and the liberty to call your homeland your own.

The minority narrative is ringing in my ears. You would have noticed too. It's almost as if Incredible India has suddenly become “Intolerant India”.

Playing opportunist, I think it is appropriate to plunge in and claim my share of the minority mind space.

Being a Brahmin — a well-minted Shaivite at that — I should, by no stretch of imagination, be in the minority conversations in the Modi and Yogi-led India.

But I am a Kashmiri Brahmin and that changes the entire equation. The realisation has finally set in and I think it is only fair that I stake claim to the minority status. Hear me out.

A couple of months ago, when my house in Kashmir (yes, I still have one; despite everything) got burgled, I was advised by friends and “foes” not to lodge an FIR.

“It would unnecessarily attract attention to a Pandit house in the locality and only create bigger trouble," one of them said. 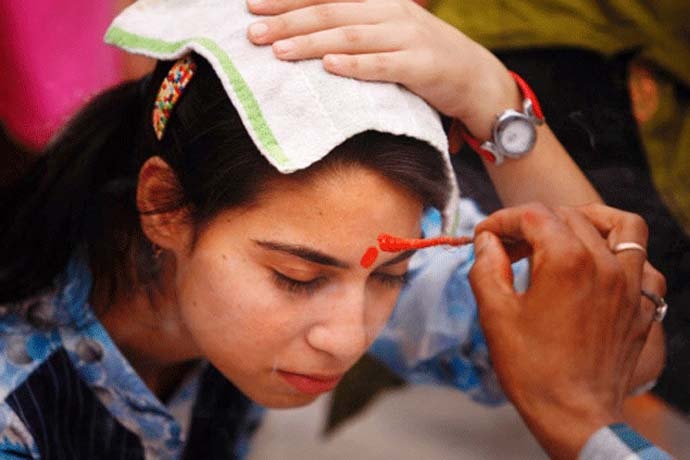 We neither became stone-pelters for money, nor for "mazhab". We did not cry “victim”. Photo: AP

I did not want my house to be raised to the ground next. So I swallowed my sorrow and did not lodge an FIR. This reality shook me in more ways than one. For the first time, I realised that holding on to my roots is fraught with risks, both emotional and economic.

Now that is the feeling of being in the minority. You have to grant me that.

Honestly, in the new political discourse in the country, minority is either a matter of convenience — you can hide behind it to cry “victim” — or it is a state of mind that people have got used to.

You may be driving golden wheels as it were, but would still keep the OBC number plate so the ride is smoother.

Or, as is true in my case, becoming the minority may also be "situational".

Every time I visit places of worship in Kashmir, my feeling of being a minority gets accentuated.

It feels most uneasy to witness my deities living under the shadow of annihilation and in the protection of the armed forces.

Faith living in the shackles of fear — it’s not something I would wish for any place of worship — be it a temple, a mosque, a church or a gurudwara.

They are symbols of human emancipation, of the freedom of faith.

I have swum through every crest and trough of Kashmir’s history in the past three decades and held on to my roots with my teeth.

But for the past six months, I have been struggling to find a peaceful window where I could visit my roots without the fear of the known and the unknown.

To cut the long sob story short, when you lose the freedom of faith, the right to your roots and the liberty to call your homeland your own — that is what I call being in the "minority".

Having said that, we are a minority with a difference. We need no accreditation from the state. We wear the badge of being Kashmiri Pandits with pride and belong to a minority that made a conscious choice.

We neither became stone-pelters for money, nor for "mazhab". We did not cry “victim”.

All we did was labour to emerge survivors of an unfair history and an opportunistic "nizam".

Also read: Where is the Habbakadal for Kashmiri Pandits to go back to?

#Kashmir Valley, #Minorities, #Jammu and Kashmir, #Kashmiri Pandits
The views and opinions expressed in this article are those of the authors and do not necessarily reflect the official policy or position of DailyO.in or the India Today Group. The writers are solely responsible for any claims arising out of the contents of this article.