The Modi sarkar, many believe, has shot itself in the foot with demonetisation. None of the promises made on November 8, 2016, have been kept. In his passionate speech at the time, Prime Minister Narendra Modi blamed all leaders who were at the helm for past 70 years for allowing corruption and black money to get a stranglehold over the Indian economy and polity.

By blaming the leaders of the yore, Modi was also indicting Madhav “Guru” Golwalkar, Syama Prasad Mookerjee, Deendayal Upadhyaya, Atal Bihari Vajpayee, LK Advani, Bhairon Singh Shekhawat among others. Despite this "incitement", the Sangh Parivar remained silent. If Modi had been in the Congress, he might have been expelled.

This was a telling example of the power and influence Modi exercises over the Sangh Parivar. He is their anointed leader. Despite the demonetisation bungle, in which 99 per cent of the new notes was returned, exposing the complete failure to crack down on the hoards of black money, counterfeit notes and deprive terrorists of high-value currency, Modi succeeded in retaining a large part of his mass support.

This was repeated in the debate over the GST. Some 160 countries have various versions of the single tax, but the Indian version has six different rates, which is uncommon. However, the trading community is alienated from this measure as it finds the exercise both bureaucratic and inflationary. Nonetheless, there is no major agitation against the GST. Modi's hold on large sections of the polity is still considered to be substantial.

A major reason behind this is the scattered and divided opposition, which has been termed “feckless” by the noted economist Pranab Bardhan. The Congress remains a pale shadow of the grand old party that was under former prime minister Indira Gandhi. For all her faults, Indira Gandhi was a commanding leader. After being trounced post-Emergency, she came back to power within three years. None of her descendants has had a tithe of her stature or standing. 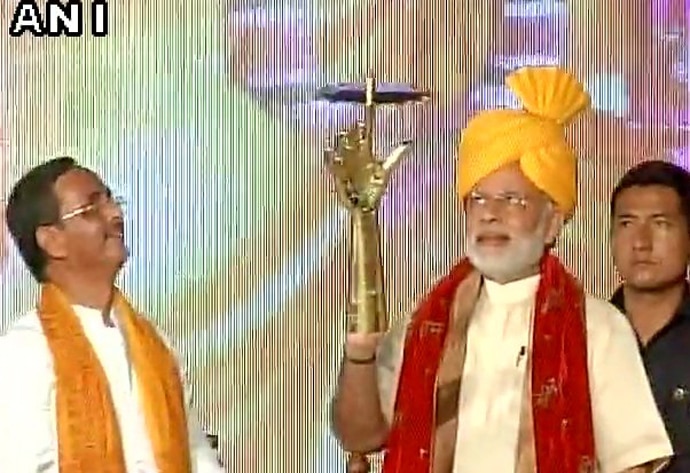 UP Polls changed the game for BJP despite the demonetisation fiasco. Photo: ANI

Now the Congress, the largest secular party, lacks a major all-India leader despite their vice-president and heir apparent Rahul Gandhi. In fact, the disaster in Uttar Pradesh Assembly polls in which the Congress demanded and got 105 Assembly seats to contest in an alliance with the Samajwadi Party, turned out to be a fiasco - with the grand old party winning a mere fraction of those seats.

On the other hand, Modi turned even the demonetisation argument around. The poor and OBCs in Uttar Pradesh were told that notebandi would target black money/the rich and, later, the poor and middle strata would get Rs 15 lakh each in their bank accounts.

The fact that this could be stated openly highlights the incompetence and weakness of the Election Commission, as such largesse is ultra vires of electoral rules. Others in the ruling BJP have benefited from such refusal of the EC to act swiftly.

Information and broadcasting minister Smriti Irani’s claim to a BA degree has been questioned repeatedly by the Opposition and the public, and the Central Information Commission has been sitting over this issue for more than a year.

Yet, nothing has moved.

The fates of the Election Commission and Central Information Commission highlight the decline of democratic institutions. A lot of judicial decisions are taken very late. For example, the pending Constitution bench on union territories and the latter’s powers vis-a-vis the Union government expected in January 2016, has not yet been set up.

As the famous dictum goes, “Justice delayed is justice denied.” Despite major and path-breaking judgments on privacy and triple talaq, there remain other pressing issues that beg the Supreme Court’s urgent attention.

The biggest problem for the Indian polity is the “opposition to the Opposition”. Parties like the CPI(M) are divided over the support to the Congress. While the powerful Kerala unit is opposed to the Congress, its perennial rival, the West Bengal CPI(M) unit supported by the party general secretary Sitaram Yechury considers that the Congress is essential to a secular front required to combat the Sangh Parivar and its allies. Bihar CM Nitish Kumar, with 2019 Lok Sabha polls in mind, has already defected to the NDA. The Congress, CPI, SP, BSP, RJD, AAP, et al are part of the Opposition, but once the question of seats arises, there is always a tussle - and often break away from the secular alliance.

But this is no ordinary situation. This is a political conjecture in which “fascistic” or extreme right-wing authoritarian forces are seeking to dominate the polity and establish the rule of the Sangh parivar and kindred parties like the Shiv Sena.

For example, there has barely been any comment by a significant BJP leader about the political assassination of rationalist Narendra Dabholkar, Govind Pansare, MM Kalburgi and Gauri Lankesh.

There is increasing evidence that 7.65 mm country-made revolvers were used to assassinate both MM Kalburgi and Gauri Lankesh.

And what about the other two rationalists? Govind Pansare was a major Maharashtrian leader. What emergent steps has Maharashtra CM Devendra Fadnavis taken, if any? This is in stark contrast to the functioning of the Karnataka Police.

On the other hand, the Sangh Parivar has created an aura surrounding their "martyr" Deendayal Upadhyaya. The Sangh ideologue was found dead at Mughalsarai railway station. There is no information as to who killed him, or if it was a planned assassination. A number of institutions, programmes have been named after him and major chapters dedicated to his achievements in school textbooks in BJP/NDA states. The RSS was not an active participant in the freedom struggle. So how is Deendayal Upadhyaya a legend and martyr?

There are several such examples from other allies too. A lot of history has been made, but a fair amount of history is being fabricated. This has had an impact on the young, impressionable minds who have not studied India's secular history.

As the proverb goes: “Those who do not learn from history are doomed to repeat it.”

Also read: Passing Women's Reservation Bill after two decades of stonewalling is the need of the hour