The chance to correct mistakes has come and gone.

Is it my imagination or are people more willing to criticise this “perfect” government at the Centre now?

Former Union minister and BJP member Yashwant Sinha has taken it pretty far today, with his scathing accusation that the economy is in a mess and neither the prime minister nor the finance minister are doing anything about it. Last week, Subramanian Swamy, BJP parliamentarian, said more or less the same thing, with less gravitas than Sinha, but more characteristic quirkiness.

From ministers and parliamentarians to you and me. A short trip to the national capital provided a small inkling of change: the Indian who laughs at “beloved” politicians. A taxi driver said sarcastically that the prime minister talks too much, a thought repeated by a hotel owner, a waiter and an office worker.

Admittedly, a small cross-section of society, but more honest than even a year ago. There is some irony that these comments were made on a Sunday, when Narendra Modi was on one more of his radio chats about how important it is to blow your nose, wash your hands and other such monumental living tips.

Personally, I see no sign of an Opposition ready to take on the BJP. And I see a concerted effort by the BJP to target those states which are not in the saffron fold. Bengal, Kerala and Karnataka are clear Sangh Parivar targets, either with attempts at fomenting sectarian violence and tension or by instructing investigating agencies to run amuck by filing cases against non-BJP politicians. 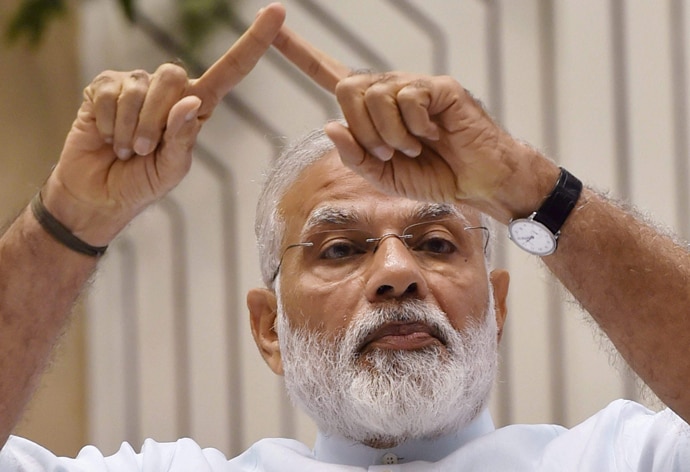 That Rahul Gandhi made some good speeches in the US has impressed many commentators, but how that will translate into votes is another matter. The strategic move to break the opposition coalition in Bihar and bring Nitish Kumar back into the NDA fold not only destroyed one more putative prime ministerial opponent to Modi, but also sent a message to the opposition that no trick was too dirty for the BJP.

But every day, with or without the help of the opposition, there is a sign of desperation in the BJP’s actions. Desperation and complete lack of new thought. Monday night’s grand announcement by the prime minister turned out to be a damp squib of epic proportions.

Forget the fact that the UPA had an electrification scheme since 2005. Let’s also pretend that no one had electricity in India before 2014. This same government, after it came to power, promised to electrify every household by May 2017. Since the scheme patently failed, the most original thought from this much-vaunted great changer of India, has been to rename the scheme, ignore the earlier one, add some new bits and try and fool all of the people all of the time with a new date: December 2018. Months before the next general elections, by the way.

Oh my, how stupid are we as a people?

Meanwhile, regardless of the government’s pets on television trying to spin it, demonetisation of 86 per cent of Indian currency in November last year, as Sinha has reiterated in the national interest, has crippled us. No recovery is in sight.

In fact, the downward spin has become worse. The badly planned and shoddily implemented Goods and Services Tax (GST) has added significant nails to the coffin or more wood to the funeral pyre if your bigoted sentiments are upset by the word “coffin”.

And increasingly, the criticism now comes from within the BJP.

The prime minister keeps talking, but now after three years, it amounts to almost nothing. Who knows if anyone follows his moral science lessons, but India is not any cleaner, it is not any more skilled, it is significantly less employed and it is not electrified as promised three years ago.

I have not even mentioned the continued attacks on religious minorities and Dalits, the continued arrogance of the cow protectors in spite of tiny raps on knuckles from the prime minister and now the open assaults on media that is critical of the government. The BJP has constantly tried to “shift the narrative” back to the “dynasty” in the Congress.

But its argument that the BJP is full of “political families” while only the Congress has a “dynasty” sounds like the tired display of illogic that it is. And while on dynasty, Sanjay Gandhi and Maneka Gandhi’s son Varun, also a BJP MP, has gone against his party and government’s stand on Rohingya refugees from Myanmar and called for a, gasp, humanitarian approach. More small signs of attrition and friction within.

So far, the BJP has been most successful electorally, regardless of criticism: like the clean sweep of Uttar Pradesh. But here in Uttarakhand where I live, the BJP clean sweep here as well, nothing is clean, nothing is swept and BJP president Amit Shah had to rush to Dehradun to deal with party infighting, anger and frustration with a lacklustre government. All announcements and no action, much like the Centre.

The chance to correct mistakes has come and gone. Remember that when we are further taxed to pay for these mistakes and misdeeds. Oh, and wash your hands.

Post your comment
#Demonetisation, #Economy, #BJP, #Modi government
The views and opinions expressed in this article are those of the authors and do not necessarily reflect the official policy or position of DailyO.in or the India Today Group. The writers are solely responsible for any claims arising out of the contents of this article.

The writer is a senior journalist who writes on media, politics and social issues.