By using technology, the government has ensured corruption is weeded out and the benefits of welfare schemes reach the poor in the country.

Skilful use of technology along with an unwavering commitment in monitoring of government schemes and procurement is bringing unprecedented transparency under the Narendra Modi government. 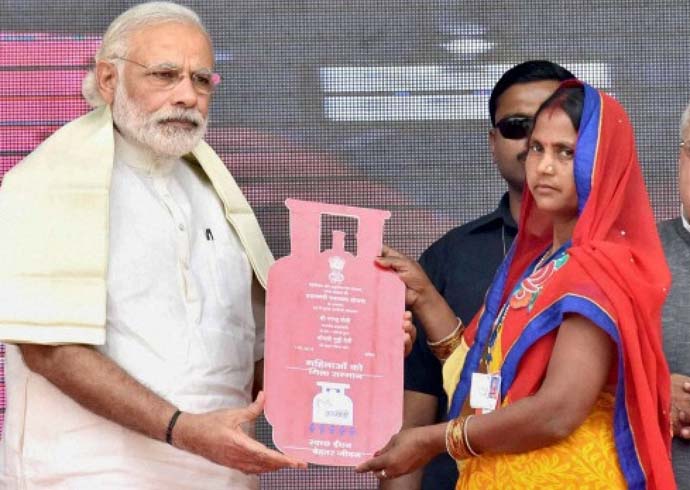 The benefits of government schemes are now directly reaching people without the involvement of middlemen. (Source: PTI)

Shabana Nasim, a young Delhi-based entrepreneur, is spellbound by the revolution that the Modi regime has brought in procurement from orders worth just Rs 2,000 to Rs 300 crore through the online procurement portal named Government e-Marketplace (GEM). She thinks this online, paperless bidding system under the Ministry of Commerce and Industry, which the government introduced a year-and-a-half ago in place of an old, paper-heavy bidding marked by nepotism and corruption has almost ended graft.

Representative of the company that manufactures Karbonn smartphone, Nasim early this year bagged an order worth Rs 56 crore following bids invited by GEM on behalf of six states that wanted to buy the phones through GEM. GEM got the phones at rates which were 37 per cent less than that quoted on Amazon. Among the bidders in this case were L-G, Samsung, Micromax and Lava.

"GEM is a revolution in transparency. The day is not far when corruption in procurement across India will be a thing of the past because almost everything about a bid is publicly visible on the portal," says Nasim.

GEM, which has emerged as the government version of Flipkart, has signed memorandums of understanding with 22 state governments which have agreed to procure their requirement through GEM either fully or partially.

On the other hand, small traders like Vinod Nayar of SVT Entrepreneurs, selling stationery and IT products, are happy that they no longer have to grease the palms of government officials and are able to get orders worth as low as Rs 2,000 by just making a few clicks on the computer.

Another such achievement was recorded in the procurement of LED bulbs. The then Union minister of state for power Piyush Goyal started buying LED bulbs in bulk through a government subsidiary selling them to government departments as well as private people as part of the PM's plan to bring down fuel cost in the country.

When the manufacturers came to know of the government's plan to go for bulk buying of LED bulbs they set up factories for bulk production. This brought down the price of a 7-watt LED bulb from around Rs 350 to Rs 38 in two-and-a-half years. A push for LED bulbs has saved the government crores of rupees. (Source: Reuters)

As many as 30 crore bulbs have been sold by the government so far and another 60 crore by the manufacturers (before 2014 only 6 lakh bulbs were sold by government and 12 lakh by private manufacturers). This is saving Rs 15,000 crore every year by way of the fuel saved. Another Rs 50,000 crore was saved because of the government not having to set up thermal power project of 8,000 MW capacity, the capacity that these sold bulbs have covered.

If there has been increased transparency in procurement there has also been a revolution in resource allocation in the field of mining coal etc by way of online bidding and smoothening of processes. 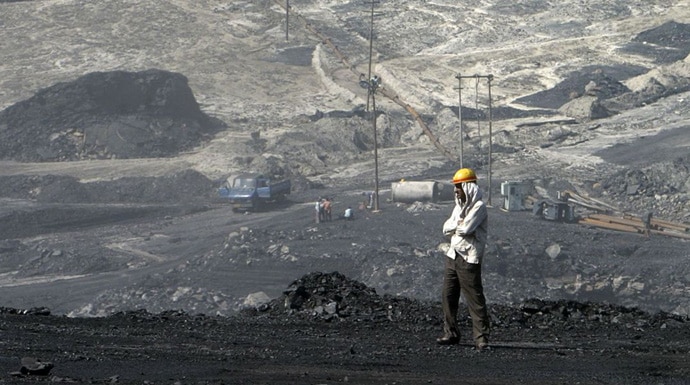 There is a greater transparency in allocation of mines. (Source: Reuters)

Before the Modi government came to power, contracts for coal, bauxite, aluminium, gold, silver, diamond and zinc mining were allotted through a screening committee, which used discretion. The process is known to have led to the coal allotment scam during the UPA regime, which led to a stoppage of coal mining after court intervention.

In a first, the Modi government started an online bidding process in the mining sector and went a step further and went for reverse bidding. This helped the government to attract the best possible prices. Now, through the new online bidding process the allocation of just 89 (of the 214 coal blocks that the SC had suspended due to scams during the UPA tenure) shall fetch Rs 3.20 crore over the lifetime of the mines, almost double of the Rs 1.86 crore, which was estimated to be the size of the coal scam during the UPA regime.

The auctioning of 33 mines of other precious metals stones and items through the same process would bring the government Rs 1.69 lakh crore over the lifetime of the mines, which is almost Rs 69,000 crore more than what was earned earlier based on standard royalty rates.

This is just one of the four areas in which the Modi government has introduced transparency.

The three other verticals, which when put together cover the entire gamut of government functioning, are helping save thousands of crores for the nation by plugging holes in the delivery system by unprecedented technology-based monitoring.

It covers even the cleaning up of the process to give away Padma awards, which had become a way to oblige a select few by those in power.

PK Mishra, additional principal secretary to the PM, says: "An unparalleled commitment not just to transparency but also to bringing in objectivity and fairness is what is driving this revolution in transparency."

Mishra was the change-maker in the first vertical soon after taking over in 2014 with just one-line instruction from Modi: Clean up the bureaucracy.

Mishra first closed the 'transfer posting industry' in Delhi. Next, the selection procedures were changed by bringing in a system of a 360-degree inquiry about every officer before deciding on his posting. This made it extremely difficult for the corrupt and the inefficient in the bureaucracy to get postings in central services.

Today, there is hardly any official in the PMO or in the 'premier or lucrative ministries' who can make his way by factors other than merit. A throwback to the pre-2014 era would show the difference it has made. Almost 90 per cent of the officers who have been dismissed or suspended or penalised for corruption and inefficiency in the past four years and who were posted in Delhi during the UPA regime had outstanding personal appraisal reports.

This clearly shows that the bureaucrats were into protecting each other's interests and there was no demarcation made between good and bad officers. However, on the flip side, there have been complaints that the system of 360-degree inquiry has been harsh on some very good officials because of the element of subjectivity involved in it.

The power of Aadhaar

The second vertical of transparency that the government worked on was to remove middlemen from the lower-end of the delivery system by pushing the use of Aadhaar cards. The cards have been used extensively to transfer the benefits of nearly 500 schemes to the beneficiaries by directly transferring the money into their bank accounts by way of Direct Benefit Transfer (DBT).

The use of Aadhaar cards for DBT was started by the UPA government on a small scale but it was turned into a weapon of transparency by the Modi government. It could achieve this was only because it worked to a plan. It first launched the Jan Dhan scheme for opening bank accounts of the poor, covering about 31 crore people in the process.

Without bank accounts DBT was just not possible. Today, DBT comes in handy for payments under 500 schemes including MGNREGA, Ujjwala, PM's housing scheme for the poor and so on. 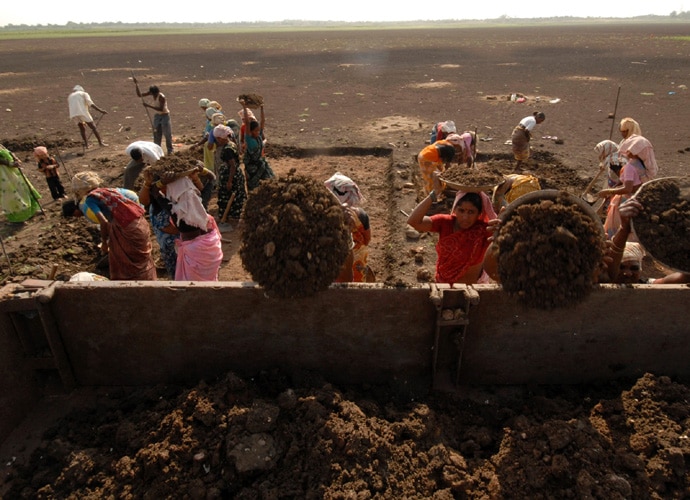 The poor in India are drawing the benefits of direct tranfer of money to their bank accounts. (Source: Reuters)

On the other hand, when universities started using Aadhaar cards for authenticating the presence of teachers in colleges, the report that came was shocking. The move uncovered 130,000 ghost teachers in Indian colleges which is almost one-tenth of the total teachers employed.

The Modi government has started monitoring important schemes through apps or dashboards in which posting of geotagged pictures of the beneficiaries or the work done by ground-level government official has been made mandatory. This is no small change because a geotagged picture shows the date and time of the picture apart from the picture of the beneficiary of the government scheme or the work done.

It takes just seven clicks on your computer to find the details of rural development projects, including the names and details of the projects or the individual beneficiaries, right till the village level.

For example, on the AwaasApp one can find out how many houses have been made say in Andaman and Nicobar or Odisha with details and pictures of the beneficiaries with their new homes. There is proof of each and every home made under the scheme.

In another revolutionary move, the Prime Minister helped float the Gram Samvad Mobile App in 2017 under the slogan 'empowerment through information'. The app is unique and a big tool for ushering in transparency in developmental works at village-level. It gives the latest details of the progress of every rural development scheme of all gram panchayats in the country. Thanks to this app, many village heads and their associates in the gram panchayat have landed in jails following complaints of corruption.

A new beginning has made by using drone cameras in tracking transmission line breakdowns in the power sector and mining theft in the mining sector and usage of satellite technology in agriculture sector.

This is truly the revolution India had been waiting for. Thanks to the Modi government it has arrived.

Post your comment
#Narendra Modi, #Ujjwala scheme, #MGNREGA, #Modi government
The views and opinions expressed in this article are those of the authors and do not necessarily reflect the official policy or position of DailyO.in or the India Today Group. The writers are solely responsible for any claims arising out of the contents of this article.