Authority that does not exist for liberty is not authority but force.

It is often said that sometimes "bad examples serve as good warning signs". You are not supposed to make all the mistakes yourself to learn in your lifetime. It is wiser to learn from others' mistakes. The political leadership of India has a lot to learn from Turkey as to how adventurism of any sort should be avoided in statecraft.

The Muslim-majority Turkey, before the rise of political Islam, was a model secular democratic state in the Arab world. Democratic political life was in full swing in Turkey. It had nurtured a democratic Constitution that guaranteed freedom of religion, thought and expression. A vigorous press, radio and television had multiplied and seemed to know no bounds.

However, President Recep Tayyip Erdogan's rise to power and subsequent ascension through constitutional manipulation changed the political perspective of the once-westernised state. His lust for absolute power destroyed democracy in Turkey. British politician Lord Acton had rightly said: "Power tends to corrupt and absolute power corrupts absolutely… Authority that does not exist for liberty is not authority but force."

Erdogan forced the Turkish Parliament to amend the Constitution to codify his dictatorial powers to allow him to remain in power till 2029. The democratic authorities under him lashed out with virulence that were perceived to be threats. The opponents of Erdogan, those who raised their voices against the oppression, were declared as enemies of the republic. They fell victims to concerted government campaigns. 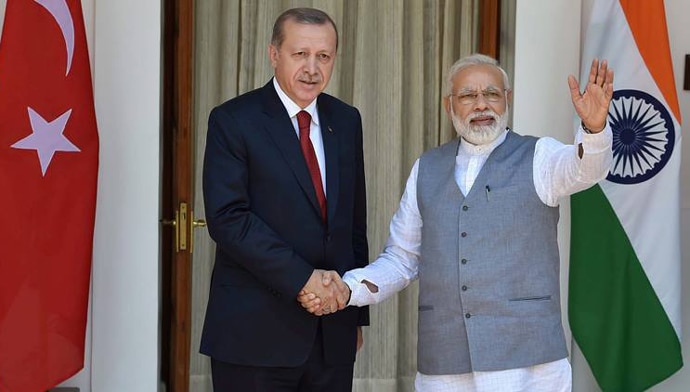 The Turkish government continues its crackdown on detractors. In an unprecedented move, his administration has detained nearly 1.14 lakh people since the unsuccessful coup in July, 2016. Those arrested include police personnel, military officers, and judges as well as civil servants and journalists. Even Parliamentarians have been stripped of the immunity from prosecution which they were constitutionally entitled to.

However, Erdogan’s crackdown on the media has been the severest. As many as 179 media outlets were shut in 2016 alone. Scores of journalists have been arrested, charge-sheeted and are facing severe excesses. The Turkish democracy has been weakened to the maximum by Erdogan's regular interventions. People of Turkey are now deeply concerned about the revival of xenophobic nationalism.

What lessons Turkey has for India?

After 70 years of Independence, the old certitudes of Indian politics appear to be crumbling. A new political grammar is trying to gain prominence that does not fit with the idea of a nation-state that India historically stands for. The political system of India is at a crossroads. A concerted effort is gaining momentum to create obedient herds instead of informed citizens.

The model of nation-building committed to protecting cultural and religious differences is being sacrificed for the sake of imposing a uniform "Indian-ness".

The thrust for homogeneity is, in fact, a negation of the Indian nationalism which is based on the idea of an ancient civilisation, united by a shared history and sustained by a pluralist democracy. We need to introspect on the very basic issues - who are we and where do we want to go from here?

Ever since the Narendra Modi government has come to power in May 2014, a sense of discomfort has prevailed among the intellectuals, and that's not unfounded. Starting from the Rohith Vemula incident in Hyderabad University to JNU and IIT, thinking minds have been the targets of this government.

Whether you question the declining GDP figures, foreign policy matters, the war preparedness of our Army or the most basic issue of price rise, you are being tagged as an "anti-national". The BJP government and their ideological patrons have inexorably reduced intellectuals from being objects of reverence to objects of popular repugnance.

Secondly, even though the BJP fought elections on the anti-corruption plank, it is the transparency laws and the mechanisms to deal with corruption that are at the receiving end of the Modi government.

On the one hand, transparency laws like the Right to Information Act are being diluted, and on the other, whistleblowers and anti-corruption activists are silenced while the corrupts are being shielded.

Thirdly, the Modi government's systematic crackdown on the civil society is a clear signal that it hates any kind of alternative views that may be incongruent to the worldview that it projects. Nobody will advocate for dubious NGOs, but it needs to be understood that a section of the civil society works for strengthening of democracy by holding governments and institutions accountable and standing up for the rights of people.

By constricting their space, we are disempowering the marginalised and the voiceless.

The fourth and the most important point is that the Modi government has become paranoid about a free press. Those who are familiar with the “Gujarat model of development” will know that Narendra Modi never allowed freedom of expression to thrive. At present, the attempt is to suffocate the voice that raises uncomfortable questions about the BJP and its government.

The government at the Centre and BJP-ruled states such as Madhya Pradesh and Chhattisgarh are either using “saam, daam, dand, bhed” (all possible means) against the media to suppress the truth or have transformed certain TV news channels into loudspeakers for the present regime.

Therefore, there are enough reasons to doubt the ability of the BJP, a political party which does not believe in the principle of inclusive politics to operate within the framework of a secular democratic system while respecting the boundaries between religion and state.

After all, the BJP-led government at the Centre is being run by the RSS, and it is no secret that the ideologies of the RSS are incompatible with democratic principles.

Lessons should be learnt from Turkey that solutions to any problem in a democracy lie in further expansion of the democratic principles, and in greater political participation of all citizens to promote broader freedom of expression.

#Dictatorship, #Democracy, #Turkey, #Modi government
The views and opinions expressed in this article are those of the authors and do not necessarily reflect the official policy or position of DailyO.in or the India Today Group. The writers are solely responsible for any claims arising out of the contents of this article.