My father suffered a brain stroke. This is how a private hospital fleeced us

Five years ago, my father suffered a brain stroke. That moment and the days that followed were gruelling for my family. The ordeal taught me two lessons: not to blindly trust corporatised, five-star hospitals and to bank upon friends and relatives.

In September 2017, Fortis Hospital in Gurgaon was accused of committing "negligence, unethical and unlawful acts" while treating a seven-year-old girl admitted with severe dengue. While the child died, the hospital allegedly inflated her medical bills by a staggering 717 per cent, making up to 108 per cent profit on the medicines supplied.

My family and I, too, saw some doctors at the Fortis Hospital in Delhi’s Okhla Road area indulge in unethical practices. I decided never to visit the private hospital again upon witnessing my father’s plight.

Bhagalpur to Delhi – a tale of two nightmares

After my father retired as a professor in Gaya in 2003, my parents began living abroad with my younger sister and elder brother in the UK and the US, respectively.

They would visit India occasionally and make it a point to go to Gaya and also our village in Bihar’s Munger district. On one such visit to the village, my father suffered a brain stroke. My mother was unsure what to make of the situation as my father’s speech had become incoherent. When she called me up to inform me of the crisis, I was at a press conference in the capital. Just as the event was concluding, I got to know of my father’s condition. I then advised my mother to make arrangements to rush to Patna, which is about 200km from my village; it would take her nearly six hours to reach the state capital. 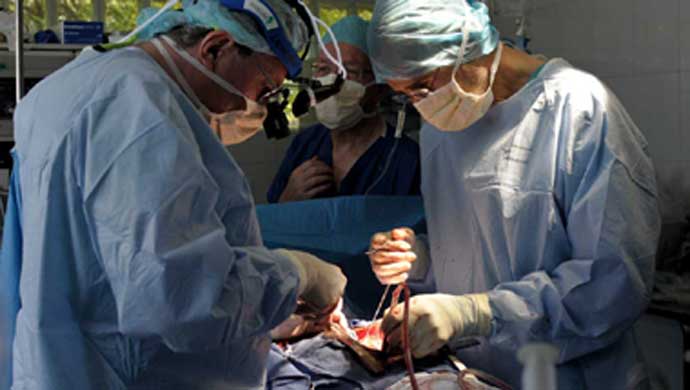 Once in the capital, we realised our worst nightmare had just begun. Photo: Reuters

In the meantime, I spoke to two of my doctor friends — Padmakar Tripathi and Pradip Bhattacharya — about my father’s problem, and they deduced that he had suffered a brain stroke and would have to be administered two shots of tissue plasminogen activator (tPA) within three to four hours. Otherwise, they said, my father was at the risk of death, or paralysis, or likely to suffer from permanent memory loss.

That realisation made me desperate to the point of madness. I frantically called up friends to get advice on how to ensure that my father got tPA immediately.

Braj Mohan Singh, another friend, advised that I should have my father sent to Bhagalpur instead of Munger or Patna. He also arranged for me the contact of the doctor in Munger, Hemshankar Sharma, who could administer the life-saving injection to my father.

With the help of relatives in the village, my father reached Bhagalpur just in time. Dr Sharma had made all the arrangements as we had already spoken about the treatment. Since there was no provision for MRI, he could only have a CT scan done but he was competent enough to diagnose the symptoms and administered every necessary injection.

I decided to leave for Bihar immediately, but the flight to Patna and then the onward road journey to the hospital in Bhagalpur would have taken me more time than the train journey. I also had to make the necessary financial arrangements for my parents, who neither had sufficient cash nor were in a position to write cheques. Too busy coordinating with my mother, doctors, relatives and friends, I could not even find the time to buy a train ticket.

At the time, my friend Ashwani Dubey came to my rescue. He not just got my train ticket done but also lent me the cash I needed for my father’s treatment. I reached Bhagalpur the next evening. I had spoken to my father a couple of times in between — while his speech was now coherent, he sounded very weak. The medication had worked. Then, I brought him to Delhi for his treatment. My father had survived due to the Bhagalpur doctor’s best efforts, but once in the capital, we realised our worst nightmare had just begun.

Dr Sharma had advised us that my father was not to undergo any kind of surgery for at least one year as he was on a blood thinner. Back in Delhi, the side-effects of brain stroke and perhaps the medication had impaired my father’s health. He would experience bouts of breathlessness. We first took him to Max Hospital in Delhi’s Patparganj on a couple of occasions, where they would admit him for a day, carry out the investigation and discharge him saying all his vitals were normal.

I wrote about this problem on Facebook and sought the help of friends. One suggested that I get in touch with a doctor at Vidyasagar Institute of Mental Health and Neurosciences (VIMHANS). When the treatment, too, did not work, he referred my father to Fortis Hospital on Delhi’s Okhla Road. As the doctors were aware my siblings had arrived from overseas and would readily foot the medical expenses, they advised a thorough check-up. We thought that the tests they had been recommending were required for our father’s complete recovery. We then had him admitted to the hospital.

But when the doctors told us to have his angiography done, we put our foot down. I remembered that the Bhagalpur doctor had warned against any invasive procedure. One evening, when my brother and I came home for dinner, one of the doctors treating him called us up to merely inform us that the angiography had been performed. I protested, though meekly, fearing it might affect the case as my father was in their “custody”.

Asked why they had gone ahead with the procedure with such urgency, the doctors said they wanted to rule out any heart problem. We had no choice but to succumb to their whims and fancies. The next day they gave us a report which stated that my father needed at least three stents, each costing about Rs 1.5 lakh. We took this with a pinch of salt. I then decided to get in touch with a friend working with AIIMS. With his help, I showed my father’s angiography report to two cardiologists at the government hospital. Both doctors advised against the stent surgery for two reasons – no invasive operation for a year and no need for the procedure. They explained to me that the stent is required only when the main arteries (like the trunk of a tree) of the heart are blocked — and this wasn’t the case with my father.

The AIIMS doctors told me categorically that their counterparts at Fortis Hospital were fleecing us. They said my father, who was about 70 years old then, would not require a stent for another ten years.

Now thoroughly disillusioned, my brother and I returned to Fortis Hospital, met the doctors and refused to give them the permission for the stent surgery. To our utter dismay, the doctors bargained with us and said they had brought the cost of the treatment down by 50 per cent. We still refused. Realising that we would not succumb to any of their tactics, they made us sign a paper stating that the hospital and its doctors would not be held responsible for any untoward incident.

We took full responsibility and got our father “freed” from the “cage” that Fortis Hospital had become. The hospital made us cough up a hefty amount, running into several lakhs, even though they hadn’t performed any stent procedure.

As I look back, I realise that Prime Minister Narendra Modi was right when he remarked that doctors indeed swindle patients and their families out of their money in the name of stents. While he has ensured manufacturers slash the prices of the stents, I hope the PM also devises a way to check malpractices by doctors who force patients to undergo the procedure.

Meanwhile, my father, currently living in the US, is doing fine. Also, I now realise that the doctor friends I consulted were more ethical, competent and efficient than many of those at the posh hospitals of the capital. I am grateful I had friends who helped me when I needed them the most.

Five years from that day, on May 9, I called up each of them to express my gratitude.