Monsoon in the foothills: Non-stop rain and Khichuri-Ilish Bhaja

The smell of damp clothes seeps into the brain, blending with the fragrance of homemade ghee rising from the mound of the khichuri. This khichuri is a staple those months. And the best part is that no one ever complains.

One of those mornings you wake up, and it's 1995 Cooch Behar all over again. The rain hasn't stopped in three days, the school bus makes its way to the house, and someone calls St Mary's to check if it's open. Only to be told that the Mora Torsha is flowing way above the danger mark and the water has reached the basketball court. We erupt in joy. The school bus traces the route back, dropping kids home. Rain is the only constant in my part of the country. That's how it is with the foothills. (Photo: Arabinda Bhattacharya)

My hometown is a town which has only two seasons: rainy and not rainy. Summers there are humid. If it gets humid for more than two or three days, it rains. When Ma Durga comes home and all of us are psyched about wearing new clothes and going pandal-hopping, it rains. That usually means an 'extension' of Durga Puja, like it's summer vacation or something. In winter, when the sun has been behind the clouds for three days at a stretch, it rains. Rain is the only constant in my part of the country. That's how it is with the foothills. That area has six or seven big rivers and a robust water system. It is why the plains are so fertile. It is also why Bhutan and India are bickering over the Teesta water.

Every monsoon (which is about six months, give or take one), all these rivers overflow and wipe about ten villages off the face of the Earth. The Torsha cuts through the main town. It has several hutments and tiny settlements along the embankment. When the river breaches the alert mark, the people who live in these homes move up; into the main town. Once monsoon is over and the Torsha is back to behaving itself, they return to whatever is left of their mud-and-stick homes. Sometimes, they start over from scratch. Building another hut. Only for the Torsha to swallow it all, all over again. This cycle of life continues.

Monsoon in this part has been more stable than the Left government. 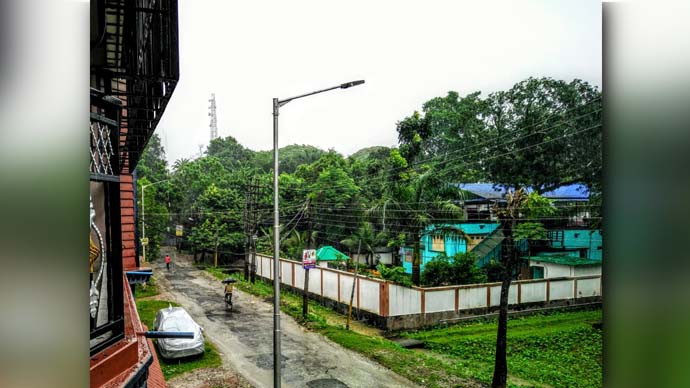 Monsoon in this part has been more stable than the Left government. (Photo: Author)

We grew up with monsoon as our best friend. It rains with a vengeance there. For weeks, the rain doesn't stop. The smell of damp clothes seeps into the brain, blending with the fragrance of homemade ghee rising from the mound of the Khichuri. This Khichuri is a staple those months. And the best part is that no one ever complains. You can have this rice-and-dal dish for lunch for a month in a row and no one will say anything. But what accessories this dish matters. Some days it is Kathi Aloo Bhaja - finely cut and fried potato, a few levels above your French Fries in both crispness and taste. The humble brinjal is dipped into a batter of besan some days and deep-fried: that's Beguni. On some very lucky days and before Ilish went out of the reach of middle-class Bengalis, a piece of the silver Hilsa, fried golden, the oil dripping into the Khichuri, would make a rainy-day lunch a royal affair.

Hot food was joy, but could not quite beat the happiness that came with an out-of-turn holiday. Now I went to a school, the border of which was marked by a tributary of Torsha. It was called 'Mora Torsha' — Dead Torsha — because it barely had any water through the year. But in monsoon, Mora Torsha would come alive. If it had rained a week in a row, the eighth day would obviously be declared a 'rainy-day holiday'. My journalist father would call up the Control Room to ask if an alert had been sounded for the Mora Torsha. If the answer was yes, the next call would be to the school. The school phone never stopped ringing on those days. Once in a while, our Sisters would just put the receiver off the hook because who can deal with incessant calls enquiring about the same thing! Every monsoon (which is about six months), all these rivers overflow and wipe about ten villages off the face of the Earth. (Photo: Arabinda Bhattacharya)

I moved from Cooch Behar to Delhi in mid-July; peak monsoon. It was raining the day I boarded the Brahmaputra Express for the Old Delhi station. The biggest difference was the amount of rain when we set foot in the capital. Also the waterlogging, which was just severe. In 13 years, nothing much has changed about Delhi. We simply aren't equipped to deal with rain in this part of the country.

It is different here. You can count the number of days it rains. It's a half-hour spell of rain-type of monsoon here. But for those 30 minutes, the rain brings back memories of a home I left behind.

Someone's probably pouring Jharna Ghee into a heap of Khichuri.

Also Read: Of all the seasons, why we love to romance the monsoon