It has been of personal sadness to me, then, to see Sanjay Dutt devolve to a dopey, drooping Dutt.

For my 11th, I had to shift, to my dismay and horror, to the all-girls Convent of Jesus and Mary, located in the city of Dehradun. It was a good 45-minute drive from the laid-back cantonment of Clement Town where we lived.

But what was even more irksome was the culture shock that lay ahead of me. An all-girls school has a completely different milieu from a co-educational environment. The mindset of the girls here, their body language, their jokes, their secret wishes and open desires, their way of looking at life and the world with men is nothing similar to that of the girls from a co-educational background.

Since distance makes the heart grow fonder, the all-girls setting made the girls more aware of the boys, in a pining sort of way; that and the fact that we all were in our hormone-enriched teens.

Leading the brigade here was the beauteous, peaches and cream complexioned, stylish and sophisticated Seema, Brigadier Gulati’s daughter who lived in the Gun House, the most prestigious address in the Cantonment.

The ride to and from the school in our giant three-ton school truck was made entertaining and aspirational by Seema’s stories and feats. Even at that age, she was one hell of a raconteur.

One Monday, she got on the truck with her left hand covered in a dainty, chiffon kerchief. She began to regale us with her Sunday escapade in the Queen of Hills and her chance meeting with Sanjay Dutt at the Mussoorie Skating Rink. She talked about how he had looked dreamily into her eyes, teased her a bit, kissed her hand and signed his name on the back of it. With our jaws suspended in astonishment, she told us how she had not washed that prized hand since then. She pulled off the fabric dramatically to show the imprint that Dutt had presumably left on her hand.

In the days that rolled by, we discovered that it was a story fed on an over-appetite of Mills & Boons that Seema had dished out to us. We found out that there had been no such meeting but we also realised that Sanjay Dutt had become an MB hero for urban, convent girls in their late teens with levels of estrogen fired up.

I finally got to meet Sanjay Dutt, about two years down the line from Seema’s fictional story. He had come to Prabhat, one of the more popular cinema halls in Doon, for a premier of his film Jaan ki Baazi. 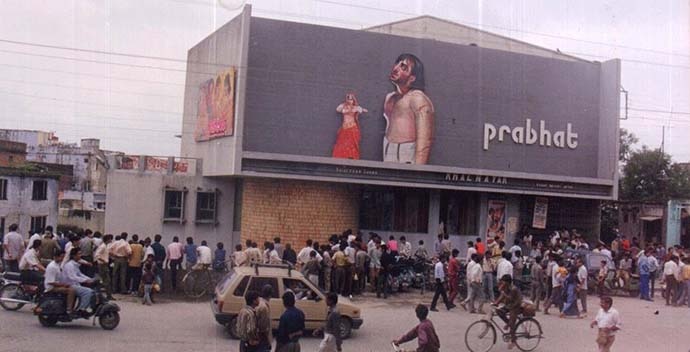 Sanjay Dutt had come to Prabhat, one of the more popular cinema halls in Doon. ( Photo credit: Prabhatcinema.com)

My mother and I had gone to see Tootsie, in the morning show that always featured Hollywood films. Just as we were about to leave the theatre at the end of the show, we met a college friend who announced to us the news about Sanjay Dutt’s appearance at the Hall for his film premier.

Now Ma had seen and met a lot of film stars.

Firstly, Dad had been friends with Sehgal "saab" and I S Johar back in the day. So, Ma had seen several film shootings and hobnobbed with many stars in her younger days. At that point, I had no recollection of having met any cine star. I think this was going to be my first instance and Ma was quite encouraging.

She told me we would step out for a quick lunch at the nearby Laxmi South Indian restaurant, another Doon landmark, and return to the theatre to wait it out. The Bombay entourage was expected to arrive by 3pm so there was not really too much time to kill.

I think the filmy party finally arrived by 5pm but the excitement and anticipation of meeting the latest heartthrob of the Indian cinema was so high, that it didn’t matter at all. All our energy and the time we had on our hands had been spent on carving a strategy for meeting the hero.

When the actor arrived, all hell broke loose. In that state of utter chaos and pandemonium no strategy would have worked. Jostling amongst the milling crowd we overheard that the guests had been taken to the theater owner’s plush office. In the midst of the “mad-about-the-movies” crowd running helter-skelter, Ma directed me to head up the stairs in the direction of the owner’s office.

I managed a toe-in into the theatre boss’s den. Not many girls had made past the melee of people clambering over each other to get close to the film star. As a matter of fact, I was the only female face around and was ushered in by the minders. Sanjay made me feel special, looked directly at me when we spoke, was down to earth, had no starry airs (Photo by writer)

I inched closer to the centre of the office and got to stand at a vantage point from where I could see Sanjay Dutt clearly. He was accompanied by, among others, Gulshan Grover, who I think was the “bad man” of the film.

Dressed in a blue suede blazer and stonewashed blue Jeans, the latest boy-man sensation was truly sexy. Radiant complexion with pink undertones, a green, 5 o’clock shadow and those dreamy, deep-set eyes made him even more luscious.

I don’t know how I got to be the only girl in the theatre owner’s chamber amongst a swelling group of local boys, but I caught Dutt’s attention. He beckoned me and engaged me in a light-hearted conversation.

The sexy stud was quite the conversationalist. When he and Grover were asked to be seated, he asked me to sit with them.

It was comical to see all the attention being poured over him. Miraculously, giant marigold garlands appeared from nowhere and lanky, star-struck boys elbowed each other to put the garlands around their latest deity from tinsel town.

Overly pleased with all the adulation, Sanjay beamed and smiled his characteristic Nargis-like smile with the semi-pursed lips and looked around bemusedly with his hooded eyes, that went onto become one of his trademark features.

We now know, by his own admission, that he has had 308 girlfriends and then some. But even then, I noted his slight flirtatious ways.

He was all gentlemanly but he knew how to shower a girl with attention. Sanjay made me feel special, looked directly at me when we spoke, was down to earth, had no starry airs, was focused on our piece of conversation when we engaged in a dialogue and did not to the least appear flighty, snobbish and restless.

But he was naughty as hell. Not indiscreet or improper. Not rowdy or perverse. Sanjay was impish and mischievous. Playful and wicked. Even when there was enough space on that large couch, he refused to move, as I sat sandwiched between the two. Gulshan Grover smiled and pushed as much into the wall to let me enjoy some space. Sanjay teased me, pulled my leg and cracked a joke or two.

I pulled out my new autograph book that, until then, only had the famous signature of India’s Iron lady, the inimitable Mrs Indira Gandhi. 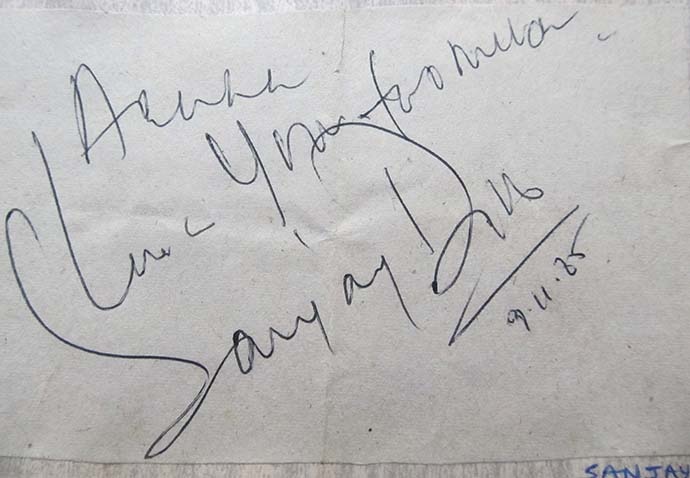 Would you not want to write to me? Sanjay Dutt asked me as I only wanted an autograph, not his address (Photo by writer)

Sanjay signed my autograph book with his distinctive flair and large-heartedness, the traits he has come to be recognised with over time. He wrote “Love you too much” and passed the book to Grover who signed off with a tamer message.

We laughed and talked some more. It really didn’t seem that I was meeting Sanjay Dutt and Gulshan Grover for the first time. The credit goes to them, that they made a gawky teenager feel so comfortable.

At some stage, I became conscious of the length of evening I had spent with the two stars. And then there were glares from every nook of the room being cast my way – some admiring, many envious.

After a while, I excused myself and told Sanjay that I must be setting off. He teased me some more. As I got up from the couch, both Dutt and Grover, in a perfectly courteous and genteel manner, got up as well.

Sanjay held my hand to wish me goodbye. He asked me, teasingly, if I didn’t want his address. “Would you not want to write to me,” he prodded.

I am sure he must have had big laughs at my expense through the evening, but when I refused to take his address Sanjay was slightly startled. I told him I preferred giving him mine so that I would know for sure that he would actually wish to correspond with me. He let the most genial smile escape; he held my slightly shaking hand again, this time in promise and said he understood me well.

As I stepped onto the street with Ma, I had a small group of men following me and asking for my autograph and requesting me to help them meet the famous star. Ma and I exchanged knowing smiles as I sprinted back home being carried on light air.

That day, I found first-hand why he was indeed the “Deadly Dutt”. It has been of personal sadness to me, then, to see Sanjay Dutt devolve to a dopey, drooping Dutt.

His life has taken so many different trajectories with experiences that have evolved him but also taken away from what he started out with – the innocence, the carefree abandon, the ease in his demeanour.

If I were to meet him again, I must remind him about his promise to write to me. The tumultuous roller coaster life he has led has brought in all together different set of priorities, exigencies, demands, criticality and necessities.

But having come out of his personal hell, in one piece and stronger than before, this time I think he will!

Also read: Why Sanju is a film in denial of its subject's flaws