Prime Minister Shinzo Abe of Japan came on a visit to Narendra Bhai Modi - that is India that is Bharat. The day the visit began, the Embassy of Japan in India brought out big newspaper advertisements carrying the Japanese prime minister's message to India. In almost every paragraph of that message and after every few sentences there was a reference to prime minister Modi.

In 1893, Swami Vivekananda spoke in Chicago at the World's Parliament of Religions to spread the message of Hindu India. In 2017, Narendra Modi gave his own speech to mark the 125th year of the original speech. The University Grants Commission (UGC) sent out a circular asking more than 40,000 institutions to organise a live telecast of the prime minister's speech. His party boss, one-time home minister of Gujarat and now a Rajya Sabha MP, Amit Shah has been telling anyone who will listen that Narendra Modi is the modern-day Swami Vivekananda.

This posturing, to gain an image greater than one's own, seems symptomatic of the constant need for Modi to reinvent his aura. There have been so many appropriations over the years - Loh Purush or Iron Man fed into Sardar Patel's memory. Vikas Purush or Development Man eroded the past contributions of those who had ushered in technology and opened up the country to globalisation and liberalisation. 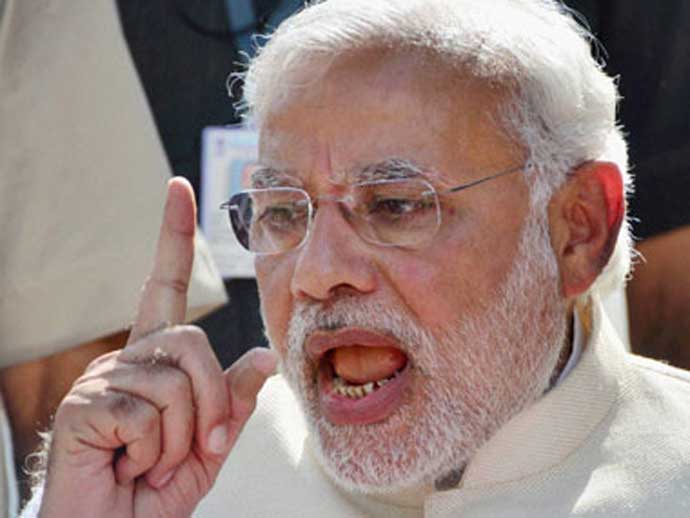 Till now, neither the artist's actions nor his audience's reactions are any indication that the performances may be losing steam anytime soon. Photo credit: Agencies

His regular visits abroad, hobnobbing with world leaders and giving them bear hugs, were to establish himself as the greatest statesman that India had ever produced and now there is the Swami Vivekananda move.

On May 3, 2017, in the presence of the prime minister, Ramdev, the baba who founded the Patanjali empire, in a speech declared Narendra Modi to be a Rashtra Rishi — a national saint. Narendra Modi was inaugurating the new research centre at Patanjali Yogpeeth. Ramdev's company also took out full page ads ahead of the inauguration that referred to Narendra Modi as Rashtra Rishi.

But not all Narendra Modi moves can be analysed and the avatars matched to originals. For example, till now, no one has been able to pinpoint who Narendra Modi was emulating when, as the prime minister of India, he wore that Modi-striped suit to have tea with the president of the USA.

Why does Modi need to appropriate legacies to create his own? Why does he need to be this larger-than-life figure? Is it because he has nothing else to show for all his bluster and promise - so he has to keep his audience mesmerised by the constant change in costumes and demeanour. So before one can wrap one's head around one incarnation, to figure out the gaps in logic, Modi moves on to being somebody else. This more often than not leaves his detractors looking silly, trying to talk about something that is so not top of the mind. He is near divine — he has supernatural powers to achieve the impossible. Photo credit: Agencies

It can be said that Narendra Modi has mastered the art of nautanki: The traditional form of entertainment primarily in north India. Nautanki as everyone knows is over the top, loud and sometimes even raucous in execution. Modi has drawn the crowds in their hundreds of thousands to see him perform because each time he appears in public, it is a performance: there is a certain stance; a certain gait; a certain posturing; a certain delivery - as befits the occasion or event. In his outreach, like any other star performer, he cannot disappoint his fans and so has to keep challenging their capacity to accept the ridiculous.

Till now, neither the artist's actions nor his audience's reactions are any indication that the performances may be losing steam anytime soon.

The fear among the dominant religious identity should stem from the fact that Narendra Modi has become a cult figure, larger than any that exists among the living. Not only is the country run in his name, but also every event, every action and even every official inaction in India somehow gets associated with the Modi name. It has seeped into national consciousness that to have something done one has to invoke the name of Modi.

How pathetic is it when the mother of a dead 7-year-old child, in her grief, keeps repeating - please tell Modiji to get them to investigate who killed my son?

According to sociologists, the rapid urbanisation of India resulted in the social migration of large populations. Even where, geographically, people did not move great distances, they moved farther and farther away from traditional structures, this without being intellectually equipped to change living patterns. So these first-generation movers, educated differently beyond their ancestral norms, carry the additional baggage of their fears and superstitions wherever they go. Lacking the perceived protection of their kula devatas and griha devatas and disconnected from their elders, they desperately thrash around trying to make sense of alien stimuli. This could be the reason why there are so many God men and women and gurus preying on the minds and hearts of the people and this could be the reason why they are so politically gullible.

Narendra Damodardas Modi has become a demigod and in that sense he is no longer Narendra Bhai of Gujarat but Modi Baba of Bharat - the Rashtra Rishi of India.

Also read: Why I will not say my nation is the best

#Shinzo Abe, #Swami Vivekananda, #Narendra Modi
The views and opinions expressed in this article are those of the authors and do not necessarily reflect the official policy or position of DailyO.in or the India Today Group. The writers are solely responsible for any claims arising out of the contents of this article.