Nirav Modi, the ubiquitous diamond czar seen in glitzy cities amid the glitterati, has stormed Indian television with a remorseless domination.

Ever since the expose of his swindling of the Punjab National Bank became public, Modi has become as popular a household name as Fogg deodorant. He has clearly dwarfed his other celebrated namesake, India’s Prime Minister Narendra Modi. What was initially estimated at an astronomical Rs 11,400 crore of daylight fraud, now appears to be a tad conservative.

More illustrious conmen have joined the rogues gallery; Mehul Choksi of Gitanjali Gems and Vikram Kothari of Rotomac pens. The fresh projection of potential larceny aggregates over Rs 30,000 crore. It is rising by the minute as more deadly skeletons are discovered in creaky cupboards. It is a cataclysmic financial disaster. It is also just the tip of the iceberg of "the great Indian bank robbery". It is rightfully said that to become rich you don’t have to own a bank; it is easier to rob one. PM Modi is renowned for his propensity to comment on all and sundry matters, but has chosen the meditative option of pin-drop silence. That has become his characteristic leitmotif when he finds himself skating on thin ice. But this time, it appears that the mirror has cracked. We are witnessing the archetypal charade on display when junior officers at PNB are being interrogated, and the chorus of cheerleaders of the Modi government have begun to give the humongous scam a familiar spin. Macro-perspectives are used calling it a "systemic failure" and embedded with "procedural flaws".

It is a cunning reductionist argument to distract from glaring corruption. They are wrong, and being willfully two-faced.  India’s banking universe has robust processes and a sound operating system; there are several safeguards, checks and balances, both evident in internal and external audits. Besides, we are talking of a publicly listed company with its several norms of transparency and disclosure. India’s central bank, the Reserve Bank of India is the unofficial ombudsman and the principal regulator of India’s banks.

Fact is, when marquee investment banks such as Lehman Brothers collapsed in the aftermath of the mortgage crisis blowout in 2008 in America , and Goldman Sachs, Citibank, AIG, Morgan Stanley etc, had to be given a magnanimous government bailout for resuscitation, it was the Indian banks whose formidable walls were not breached.

PNB scam is not on account of absence of adequate firewalls; it is because of a deliberate regulatory oversight. It is because of human greed. It is because of political umbrage. Money does not just automatically vaporise from bank coffers; people with elastic morality make cash disappear.

In a déjà vu of liquor baron Vijay Mallya’s red-carpet send off from Indian shores, Modi, Choksi and family trooped off with insouciant ease through India’s immigration counters in early January of 2018. Modi even had the cool effrontery to be in the august company of India’s other billionaires, manifested in the now famous photo-shoot with the prime minister at Davos. 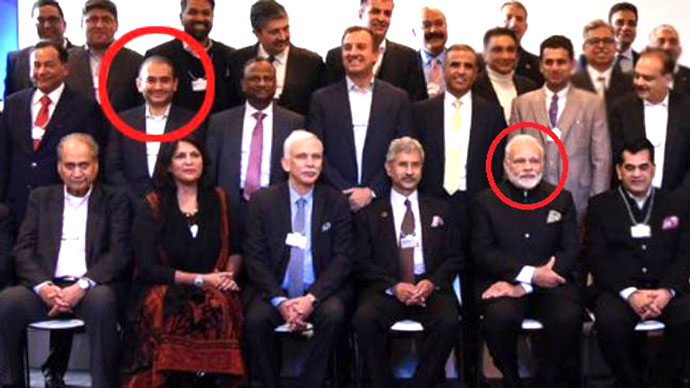 Interestingly, his maternal uncle Choksi’s shady deals and wicked intentions to dupe banks were told to the Prime Minister’s Office in both 2015 and 2016.  Nothing happened. Maybe it was assumed that bankers are chumps.

Ever since 2014, gross non performing assets (NPAs) have gone up nearly 400 per cent from 2.36 lakh crore to an estimated 9.5 lakh crore as of March 2018, as have the number of frauds perpetrated on the heavily regulated PSU banks.

Why was the government comatose for 75 per cent of its term?

The bank recapitalisation was too little too late; they were already discombobulated with stressed assets reaching Rs 15 lakh crore. Large willful defaulters increased their overall exposure, while the government refused to do the heavy-lifting they ought to have.  The answer to this blasé behaviour that has led to a cyclopean NPA crisis in PSU banks deserves greater public scrutiny.

In the current Nirav Modi scam context, it is germane to look at the contentious electoral bond scheme that ensures anonymity for corporate donors making contributions to political parties. It is downright blasphemous and makes a thorough mockery of transparent campaign finance. It is actually a "facepalm moment" for Narendra Modi and his self-righteous party. That over the last few years, 80 per cent of political funding has gone to the BJP alone provides a significant takeaway.

Crony capitalists who are large beneficiaries of government charity usually pay back through election funding. It becomes a case of round-tripping, a win-win for both sides. It is, therefore, hardly surprising that those who have bamboozled the system rarely get caught. Political patronage includes a quid pro quo that guarantees assured safety, and a warm, red carpet send off to foreign destinations; only the hugs are missing as that would be terrible optics.

As for the ordinary EMI defaulter in home and personal loans and credit cards, after several nasty calls, expect a roughneck bouncer to ring the bell. Life is not fair, but then a diamond is forever.