No, Kashmir is not burning. Saying so only helps Pakistan

Ex-Army officer explains why BJP and Mehbooba are fooling India with 'divorce'.

There is a general perception being projected through multiple sources of media, via editorials, opinions and prime time debates, that the situation in Kashmir had deteriorated and hence the BJP has withdrawn support, preferring governor’s rule. The true reasons for withdrawal are mainly political — and stem from the party’s desperation to retain its hold of the Jammu belt, which it was fast losing.

It was evident that Jammu and Kashmir chief minister Mehbooba Mufti was more concerned about the Valley — it being her electoral base — and facing Pakistan’s proxy war than Jammu and Ladakh. Stating political reasons for its withdrawal would impact the reputation and standing of the BJP, because when it joined the coalition, the situation was no different, hence it was looking for a trigger, or an incident, and the assassination of senior Kashmiri journalist Shujaat Bukhari provided just that.

The reports on the deteriorating situation appear to have been guided by the BJP’s comments that security forces would now have full freedom to act and regain control in the Valley and were evidently blown up by an ever-obliging media. The BJP has gone a step further further in mentioning that security forces can now employ a “hard approach”. Peaceniks, and to some extent Mehbooba, have been stating at multiple fora that a resolution to Kashmir would only be through talks with all “stakeholders” — a word whose meaning remains ambiguous — and not through a “hard approach”.

The Valley has been in its present disturbed form for some time now. According to me, the levels of violence of 2016, post the elimination of Hizbul Mujahideen chief Burhan Wani, are an aberration. The Army has operated in the same manner, employing the same tactics, with miniscule changes based on the perceptions of commanders, prior to implementation of the NICO when it came into effect and post the establishment of governor’s rule.

The only difference was that most militant leaders earlier came from Pakistan, but are now local.

There won’t be any change in the Army’s approach, tactics and weaponry. It will continue to smoke out terrorists as hither to fore, employ minimum force, call parents of local terrorists hoping for their surrender and counter stone-pelting if it interferes with their operations.

Thus, the phrases “deteriorating situation” and “hard approach” are purely political misnomers, projected by the BJP, aimed at garnering credit for future Army successes, which it knows would come about, as also to justify reasons for its withdrawal from the coalition government.

There would however be some major benefits of operating under the governor’s rule, especially in the Valley. The state surrender policy, which could not be cleared due to differences in the ruling coalition, would now be approved, so would be the rehabilitation policy. 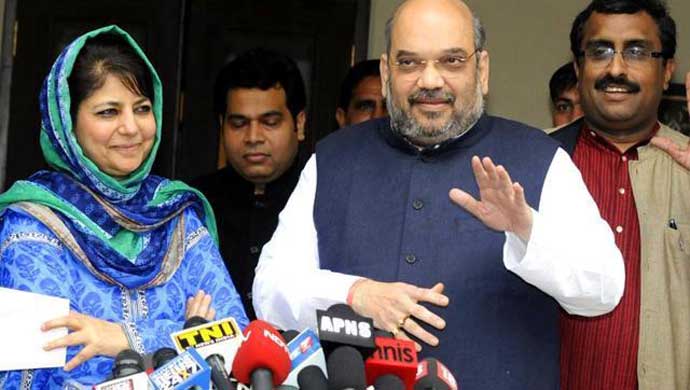 BJP and PDP leaders have indulged in coalition drama, without thinking of a fitting reply to Pakistan's excesses. Photo: PTI

Investigations by the NIA and ED into the Hurriyat’s Hawala transactions, which were pushed to the backburner by the PDP-led government that had hoped for a breakthrough in talks, would now be visible again.

A major benefit would be in the approach of the state police, which would be freed from the shackles of political interference, an aspect which the Jammu and Kashmir DGP aptly described in an interview, “every political party has its compulsions”. The other visible difference would be that pardons granted to stone throwers may be withdrawn.

Local youth joining militancy has been billed as an indicator of deteriorating law and order. The same has been happening because of the glorification of eliminated local militants and the deaths of those either caught in the crossfire of encounters or attempting to disrupt operations.

The state police, immediately after the declaration of governor’s rule, has issued directions to control burials, preventing militant presence and speeches, which was resisted by governments dominated by Valley-based political parties. This would play a significant role in reducing recruitment into militant ranks. 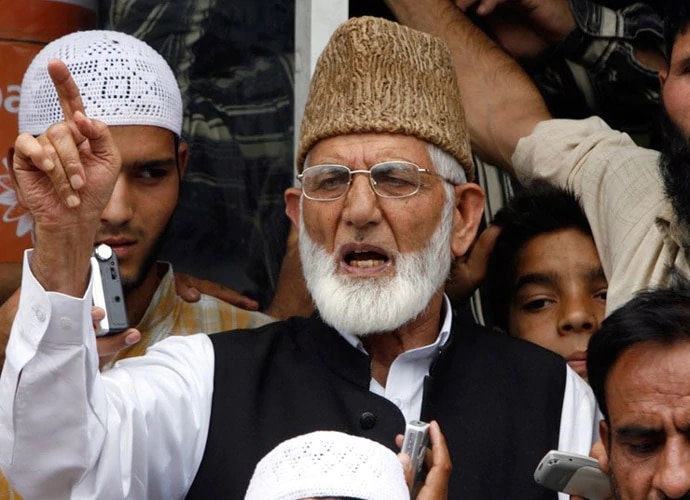 Hurriyat needs to be shown its place. Photo: Screengrab

The youth have been fed with dreams of “azadi” which local leaders know is never feasible. No political outreach has ever been attempted to change this view. It is this unrealistic dream alongside the funding of stone throwing that has continued to breed violence.

The deployment of the NSG is being justified by a section of the media as being due to the deteriorating situation. This perception is false. Their deployment, akin to those of the Graud (air force commandos) and MARCOS (naval commandos) is to hone their skills through live engagement, rather than just normal training, as was the norm.

Over the years, levels of violence in the Valley have risen and fallen, however peace and resolution of dispute have alluded the region.

Security forces have on numerous occasions brought the situation under conditions of “near normalcy”, only to lose ground as there has been no political push for resolution.

“Demands for talks with stakeholders” has been a vague phrase used by peaceniks. No one has clearly defined “stakeholders”. 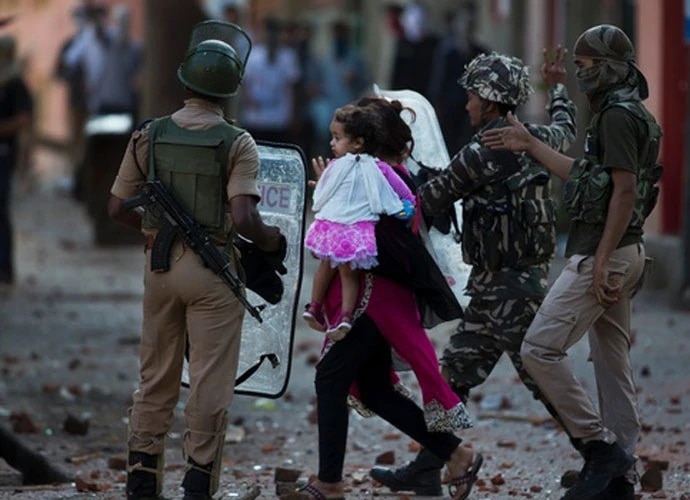 Who cares for the Army? No one. Photo: REUTERS

If the words of Mirwaiz Umar Farooq stated in an interview to The Tribune on June 24 are to be considered, there would never be talks, as the Hurriyat’s demands are beyond the acceptance of any government. He stated, “There are two ways out - grant the right of self-determination under the UN resolutions or hold talks between Delhi and Islamabad, Srinagar and Muzaffarabad (capital of Pakistan occupied Kashmir).”

The present government has categorically stated talks and terror cannot go together as also no government in history would have the Hurriyat and PoK political leaders on the same table as Pakistan. Thus, while peaceniks may continue mentioning talks, it appears nowhere on the horizon as apart from the Hurriyat, there are no visible stakeholders.

Thus, with no political solution in sight, security forces would continue operating as they have been over the years, controlling levels of violence, reducing the number of militants and eliminating those being infiltrated. Pak would not cease supporting levels of violence, as for them there is no other option and with minimum investment it provides them with maximum gains and international publicity. It also enables them to resort to India bashing in international forums.

Thus, realistically, Kashmir is neither burning nor is the situation alarming. It is being so projected only for political purposes. The hype being blown up by the media only adds to the perception across the nation.

This projection is immensely damaging as it provides Pakistan with more ammunition to damage India’s standing, and to enhance the morale of their supported militant groups.

Internally, these comments are exploited by anti-national elements, including the Hurriyat, to stir more violence and shout from the rooftops against security forces. There is a need for more responsible statements and the projection of the correct perspective before the national and international community.

Essentially, the truth about talks and relevant stakeholders needs to be spelt out by those supporting this concept, rather than being perennially ambiguous.

Post your comment
#Pakistan, #Hurriyat, #BJP, #Mehbooba Mufti
The views and opinions expressed in this article are those of the authors and do not necessarily reflect the official policy or position of DailyO.in or the India Today Group. The writers are solely responsible for any claims arising out of the contents of this article.