The Nobel panel demonstrated the lack of foresight and thoroughly erred in choosing two personalities for a great honour.

Ordinary citizens are no experts to judge the merit of a scholarly work that qualifies to win the Nobel prize in medicine, physics, chemistry, economics or literature. However, they can certainly judge the merit on which the "Nobel Peace Prize" is conferred.

Especially, for the contributions made towards achieving peace, protecting the rights of the poor and the most vulnerable and supporting the struggles for achieving just political and economic aspirations.

Therefore, I consider the Nobel Peace Prize to be sacred - it must be awarded after thorough scholarly reviews. Clearly, on two occasions, the Nobel Peace Prize committee demonstrated the lack of foresight and thoroughly erred in choosing two personalities who do not even remotely deserve any peace prize, let alone the greatest of all.

The two personalities are Myanmarese politician Aung San Suu Kyi and former US president Barack Obama, who were awarded the prized Nobel for peace.

Take the case of president Obama. It was during the 2008 US presidential elections that my former mentor at Johns Hopkins University at Maryland had just returned to her office after voting for Obama. Obama did not relent from killing Syrians even in the last days of his presidency, Photo: Reuters

The reason she gave for favouring Obama over Republican presidential nominee John McCain was: "If we do not vote to oust Republicans from power, there will be no end in sight for the war in Iraq."

In other words, Obama's presidency was a premise of hope for achieving peace and stability in the Middle East and perhaps in Asia and Africa as well.

These regions have been plagued with chronic political instability, wars and famine - which, incidentally, were seeded during the colonial rule of British and French; more recently, flawed policies by the United States added to the chaos.

Contrary to expectations, what Obama did was more shameful than his predecessors.

During the eight long years of his presidency, Obama routinely and consistently signed orders for drone assisted extra-judicial murders of individuals living in the remote mountain regions of Afghanistan-Pakistan, East Africa and Yemen.

The murder of individuals without proof of guilt and evidence of crime amounts to killing the spirit of the Nobel Peace Prize and humanity.

As if the drone assisted murders were not enough, Obama ordered a direct military campaign in Syria - not to punish its brutal dictator over the use of chemical weapons against civilians but against suspected militants fighting the dictator who, under Obama's watch, butchered hundreds of thousands of civilians and displaced millions. 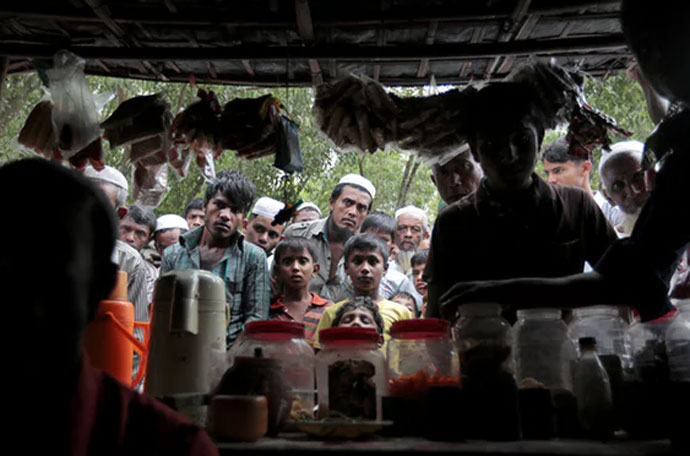 Thousands of Rohingyas have been uprooted and forced to live under inhumane and horrific conditions in shanty camps, without access to health care and restrictions on reproductive rights. Photo: Reuters

As a result, barely surviving and starving innocent women and children in Syria had to bear the brunt of US-led military assault. Obama did not relent from killing Syrians even in the last days of his presidency, which he ended with a murderous assault on a camp in Syria's Idlib province - leading to the death of more than one hundred people.

It is noteworthy his justification for the killings had been "an imminent existential threat to Western civilisation".

And, who are those threatening the Western civilisation and way of life, who deserve to die without proof of guilt?

The answer is: an impoverished and famine-stricken people based in the inaccessible mountains and remotest corners of the old world and even nomadic desert tribes.

Let us take the case of another Nobel laureate, Aung San Suu Kyi. She was conferred the Nobel Peace prize for her consistent struggle against the military Junta for establishing a democracy in Myanmar.

It appears all her work for the foundation of democracy and peace in Myanmar was deliberately exaggerated by the Western media to the extent that it eventually backfired.

On many occasions and on record she appears to be expressing no visible urgency to stop the genocide of the minority Rohingyas. More shockingly, she repeatedly defended government policies and rejects the notion of the Rohingya genocide.

Under her administration, Muslim Rohingyas have suffered more killings and devastation. Thousands have been uprooted and forced to live under inhumane and horrific conditions in shanty camps, without access to health care and restrictions on reproductive rights.

Tremendous disrespect and disrepute was brought to the legacy of the Nobel Peace Prize and the world's consciousness when former US president Obama - an undeserving laureate - visited Myanmar in 2012 to re-establish diplomatic relations.

And, then in 2016, Obama invited fellow undeserving laureate Aung San Suu Kyi to his oval office and rewarded Myanmar by lifting long-held US sanctions. I want to present these facts to the learned Nobel committee so that they can judge on what merit was the two leaders were conferred the peace prize.

In order to maintain the sanctity of the revered award and the dignity of those who deserve to win it, the Nobel committee must demand the return of the prize from both Obama and Suu Kyi.

Also read: On style: Prose of Arundhati Roy, Meena Kandasamy and others

#Aung San Suu Kyi, #Barack Obama, #Nobel Peace Prize
The views and opinions expressed in this article are those of the authors and do not necessarily reflect the official policy or position of DailyO.in or the India Today Group. The writers are solely responsible for any claims arising out of the contents of this article.