Not In My Name: We can't stand in silence and let them lynch and rape

At the cusp of losing our freedom which we fought for, together, as one people, it's time for us to speak out.

Lumpen elements, backed by shady netas are gnawing at our rights. We protested. We were handcuffed and beaten to pulp. Together. We rose our voices, feeble at first, but ferocious soon, as one people.

They drove a wedge between us. "You are not one people," they say.

"You don't eat the same meat or worship at the same place, how can you be one people?" Together, as one people, we resisted.

"Our differences are superficial," we say, as one people. 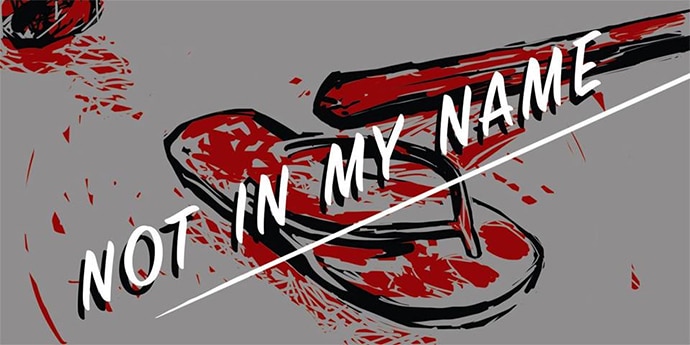 Photo: Facebook/Not in My Name

We went to schools. You to yours and we to ours. But we didn't just want to work for them, in their factories and estates. So, we resisted. Now their allies say they won't develop villages that don't support them. Treating states like jagirs. We will teach them a lesson. Together, as one people.

When we sing songs of liberty and fraternity, as one people. They panic again.

And this time they teach us a new tune, one that's neither soothing like Vande Mataram, nor one that gives goosebumps like Sare Jahan se Achcha. We sing the song of freedom, but in many tongues. We muddle through, still clinging to our heritage of being one people.

"Our differences are superficial," we say. Together, as one people.

Sometimes they talk of an "Akhand land". And yet, your land, rivers, jungles, mountains and oceans, they say are different from ours. Rationality flickers as the winds of insanity blow all over.

Today, a beard could get a man killed. A skirt could get a woman raped. The carcass of an animal could get an entire neighbourhood engulfed in flames.

Suddenly, the superficial has become profound!

They butchered and raped. We stood in meek silence. Together.

Our masters do little to stop the madness. They are busy packing their bags to the next destination, the next junket, apparently to serve us better. Whilst we have now become imbecile with severe fault lines. We fight each other. Starve together.

You bury, we cremate. You decay, we burn.

And they promise to build a shamshan for every kabristan. So profound!

At the cusp of losing our freedom which we fought for, together, as one people, it's time for us to stand up and speak out.

Also read: Truth behind those killers who lynched Junaid Khan

#Lynch mobs, #Nowhatta, #Junaid Khan, #Not In My Name
The views and opinions expressed in this article are those of the authors and do not necessarily reflect the official policy or position of DailyO.in or the India Today Group. The writers are solely responsible for any claims arising out of the contents of this article.